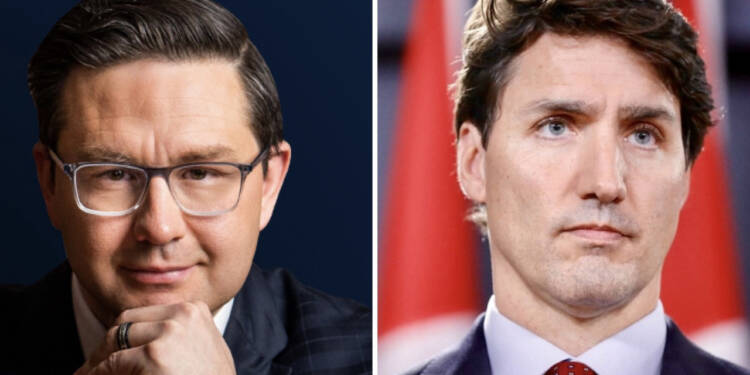 Be it Canadian liberal media, the faltering conservatives or even the liberals, every one of them will cease to exist once Pierre Poilievre comes to power. We predicted that much before, right? But, now when Pierre Poilievre finally takes the lead, the countdown for Trudeau’s ouster has begun.

The liberal poster boy in Canada must be having sleepless nights these days. Certainly, Trudeau can’t stand the rising popularity of the conservatives in Canada.

According to recent national polls, Canadian Prime Minister Justin Trudeau has a disapproval rating of 52%. Additionally, a whopping 62% believe he is on the wrong track, and making wrong decisions. The latest data also reveals that not only is Trudeau’s popularity decreasing, but so is that of his Liberal Party. It is the Conservative Party of Canada that has taken the lead.

This was enough to alarm the Prime Minister of Canada. Now, this truth might hurt you Trudeau, but your rival is poised to oust you. So, stop hunting for political rites now. You see, ever since Trudeau’s rival has taken the leadership of the conservative party, Trudeau’s stooge media is busy lambasting the leader on his political background.

The Canadian liberal media is beating their breasts over his victory. We know liberals with Poilievre in leadership, your lives are going to be a bit more annoying now but don’t you think the much-ado is futile?

Not to mention, the Liberals in Canada are now perturbed. Till now being just a member of the conservative party, Pierre Poilievre managed to be the ‘blue-eyed boy’ of Canada. And now, when he has taken on the leadership it becomes the apple of discord for the Canadian liberals.

The rival of Mr. Trudeau has embarked upon the journey of becoming the face of the CPC. The conservatives are poised to come together after the resounding victory of Poilievre in the party’s leadership contest. To add on to Trudeau’s worries the Conservative caucus is ‘totally united’ in Canada

Former Conservative leader and MP Andrew Scheer, who supported Poilievre, said he was “very confident, very optimistic” the Conservative caucus would come together.

Pierre, who has portrayed himself as a man of the people, is an outspoken conservative who is not hesitant to take conservative positions on a variety of subjects. He talks about the economy, gun control, and is against strict vaccine mandates.

He also lend his support to the freedom convoy that marched to Ottawa to seek the overthrow of Canada’s democratic government and the repeal of public health regulations.

Poilievre has also been able to eliminate his opponents, build a following of true believers, and win elections. His rise as a leading face has been mirroring a global surge of right-populist politics. His actions are similar to those of many world leaders who followed a similar path to come into prominence. As Poilievre understands what it takes to ascend to power, undeniably, he is soon to be added to the list of ongoing right-wing leaders who are gaining ground almost everywhere in the world.

Sad enough! Mr. Trudeau must be crying in some corner now. But, at least now you should realise that you dug your own grave. Your regressive policies sabotaged your party’s electoral prospects.

We know that Canada will not be holding a general election until 2025, given the Liberal/NDP pact, but even if Trudeau wishes to call for a snap election to get an edge over Poilievre, he will only dig his own political grave.

We are aware of the fact that the Liberal party has lost its clout to the Conservative party in Canada.

Be it the living conditions, the “Freedom Convoy” and its chaotic aftermath, an affordability crisis fuelled by 40-year record inflation levels, or the crisis at Canada’s airports and passport offices, Trudeau’s liberal party has failed miserably.

But, worry not Canadians Pierre will hit the correct notes. As Trudeau continues down the wrong path, Pierre has undoubtedly discovered the perfect path and is set to be added to the list of populist leaders who came to power by deposing an elite and incompetent administration. He has successfully cracked the prime ministership formula.