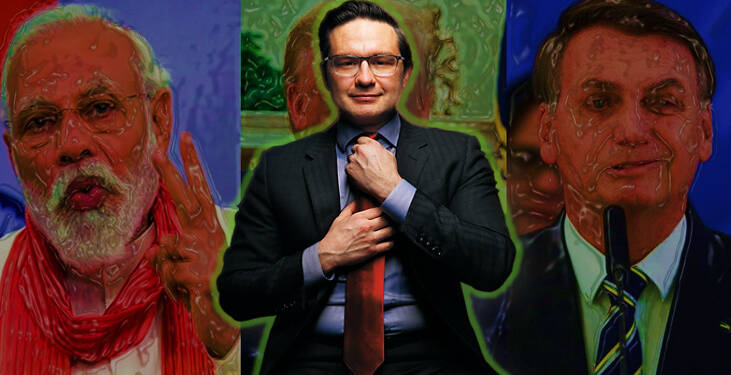 According to recent national polls, Canadian Prime Minister Justin Trudeau has a disapproval rating of 52%. Additionally, a whopping 62% believe he is on the wrong track, and making wrong decisions. The latest data also reveals that not only is Trudeau’s popularity decreasing, but so is that of his Liberal Party. It is the Conservative Party of Canada that has taken the lead. These figures are enough to alarm the Prime Minister, who did not waste time warning his citizens about rising populism in the country. Indeed, there is a concern about rising populism, not for Canadians, but Trudeau himself, as his rival is poised to oust him. And the rival is none other than the leading face of the CPC -Pierre Poilievre.

Pierre, who has portrayed himself as a man of the people, is an outspoken conservative who is not hesitant to take conservative positions on a variety of subjects. He talks about the economy, gun control, and is against strict vaccine mandates.

He also lend his support to the far-right-led freedom, the convoy that marched to Ottawa earlier this year to seek the overthrow of Canada’s democratic government and the repeal of public health regulations.

Poilievre has also been able to eliminate his opponents, build a following of true believers, and win elections. His rise as a leading face has been mirroring a global surge of right-populist politics. His actions are similar to those of many world leaders who followed a similar path to come into prominence. As Poilievre understands what it takes to ascend to power, undeniably, he is soon to be added to the list of ongoing right-wing leaders who are gaining ground almost everywhere in the world.

A parallel with other populist leaders

Populism is a political movement that seeks to appeal to “the people” by convincing them that its leaders are the only ones who represent them and their issues, which are being disregarded by a perceived “elite establishment.” Populist movements and political parties are frequently led by charismatic, dominant figures who portray themselves as “the people’s voice.” While populists can have a variety of ideologies and governing styles, the movement has been associated with illiberalism and right-wing politics over the past years.

Read more: Balkanization of Canada is a real possibility under Trudeau

A very good example of a successful populist leader is Indian Prime Minister Narendra Modi, who came into power in 2014 winning a landslide victory in the national general elections. He and his party enjoy widespread support among the urban middle and working classes. Modi was elected with the promise of ridding the country of corruption. He spoke on Hindu nationalism and reclaiming India’s lost glory and civilizational heritage. All of this resonated with people, given that he is currently the only populist leader elected with a large majority in a democracy. Not only that, but he has the highest approval rating in the world (75%).

Since then, world leaders have endeavored to follow a similar trend. Consider Donald Trump, whose white working-class supporters went out in significant numbers to vote for him in the 2016 presidential elections. Campaigning about similar issues is what landed him in power. In addition, he also popularised the slogan “Make America Great Again.”

In 2018, Bolsonaro became the latest far-right leader to come to power by riding waves of rage against the establishment and pledges to upend the status quo.

A similar tide is now sweeping Europe, becoming the most significant European political phenomenon of the twenty-first century. Rising populism across the continent has eroded support for traditional center-right parties while knocking out the left-leaning political outfits. As these issues remain unresolved, anti-immigrant, anti-internationalist sentiment has shifted the political balance in Europe, with grave consequences for liberal parties across the region.

In Hungary, the Prime Minister, Viktor Orbán has been in power since 2010. His administration has been staunchly opposed to all alternative viewpoints and cultural “mixing.” Another recent example would be the rise of Marine Le Pen in France, who gave Emmanual Macron a scare in the 2022 elections, which was unprecedented. Her rise in France, as well as in other far-right and right-wing populist groups across Europe, shows a pattern of altering political beliefs and ideas.

The next Populist Prime Minister

Populists are popular for a reason. They discuss issues that individuals encounter daily, rather than promoting a woke agenda. That is what all of these charismatic leaders have been addressing, and people are rallying behind them because they believe them and are fed up with the status quo. Similar things are happening in Canada, and Pierre has hit the correct notes. As Trudeau continues down the wrong path, Pierre has undoubtedly discovered the perfect path and is set to be added to the list of populist leaders who came to power by deposing an elite and incompetent administration.