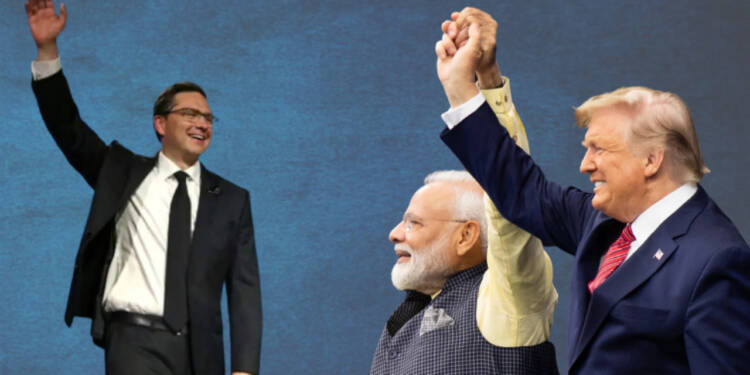 Wait, wait, wait liberal media, you’re making a big mistake! Your campaign is most likely ready to backfire on you.

Ever since Pierre Poilievre became the face of the conservative party in Canada, the liberal media has started rolling up its sleeves. Along with taking on the leadership, Pierre has also reserved his place on the front page of newspapers and journals. Evidently, Trudeau’s fanboys in media can’t get sick of covering, or wait, ‘negatively covering’ the new kingpin.

But, the entire Canadian media is probably repeating the fatal mistake as did the American and Indian media when Donald Trump and Narendra Modi were competing to come to power in their respective countries. Let’s talk about the facts now.

It was 2012 and India’s soon-to-be Prime Minister Narendra Modi had officially initiated his campaign. All through his campaign, he highlighted various issues relating to national security, economic development, and minority appeasement in the name of secularism in the country.

When the Grand old Party of India i.e., the Congress party was in power, India was the favourite and might I say the easiest target for Islamic terrorists. In terms of development, when Narendra Modi was the Chief Minister of the Western State of Gujarat, his development model received praise in India and globally. Under his leadership, Gujarat was known for its development-oriented governance, where the people were made active partners and stakeholders in the development journey.

Read More:  Trudeau plans a huge influx of Ukrainian refugees into Canada at the expense of poor Canadians

To be fair, Indian Media which was largely controlled by the liberal establishment of India was very receptive of Narendra Modi, only all the reception was negative. From his academic credentials to his marriage to his so called Hindu Nationalist and Anti-Muslim image were discussed ad nauseum.

It did its utmost to convince people that Modi’s government failed to do enough to prevent 2002 Gujarat riots that led to a mass killing of Muslims. The media tried every tad bit to put the brakes on his popularity. But what ensued eventually? It got a slap in the face. Modi won a landslide victory shattering the media’s ‘anti-Modi’ campaign.

The media had overplayed its hand and Modi’s victory can partially be attributed to Indian Media. What an irony!

Similarly, we know how the western liberal media joked around the Republican representative in the United States of America. When Donald Trump was running for president as a Republican candidate, the media assumed he was playing a practical joke. He was never taken seriously.

Most of the media attacks on Trump were about his looks and style, but the media failed to dissect his ideology because they were simply not interested in it. Trump battered his way through with his “America First” and “Make America Great Again” slogans. By the time he was the prime challenger of Hillary Clinton, media was already too late. They tried to make up for the loss by predicting a blue wave in the US.

Despite the media’s uphill battle, Trump won a thumping majority, kicking ‘seasoned politician’ Hillary Clinton out of her career.

The incompetent liberal party is aware and has accepted that the conservative politician can succeed in ousting PM Trudeau from his seat.

So, the Liberal party’s pet media came into action. The state media can’t get enough of covering Poilievre now. The opposition liberals, their allied parties, and the media have joined ranks to destroy the credibility of Poilievre.

The media is warning Canadians and compelling them to scrutinise their choice of leadership. They are warning people about Poilievre’s previous record in government, which cut health care, imposed austerity on everyday people, introduced anti-labour laws and helped rich corporations pay even less in taxes. The media is running a false smear campaign against Poilievre. Some of them also think he is too angry all the time, that his eyes are very small, and he can’t laugh and he can barely force a smile.

It’s good omen actually. When the Media unleashes an ad-hominem attack on any leader of stature, it simply means that the planets have aligned to give the man his rightful ticket to power. Looks like Pierre Poilievre is all set to become a “responsible leader” and oust the “rockstar”’ prime minister of Canada. Maybe then he can laugh and flash his not-so-small eyes.