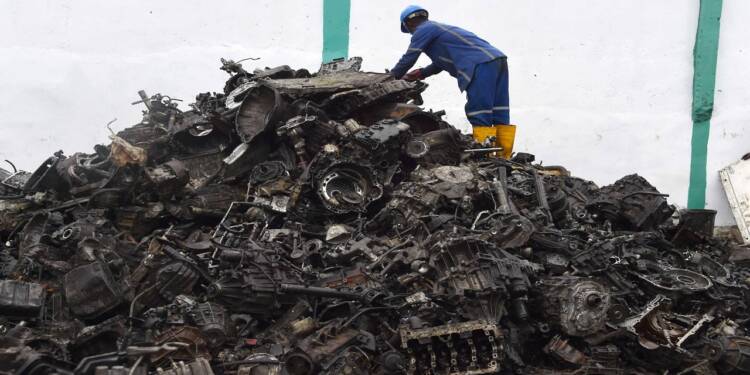 Visualise this: A young shirtless man in Africa standing over little flames fueled by waste imported from wealthier nations, labouring in a small hamlet in Ghana or Nigeria — yes this is one of the most recognisable images in contemporary ecological reportage.

Don’t be mistaken; the above description is in no way a hyperbole. Western countries have long used Africa as a disposal destination for anything from old garments to computer garbage. It’s a hazardous annoyance that seriously endangers the ecology.

According to the Or Foundation, a human rights and environmental NGO from the United States, about 15 million individual pieces of discarded clothing come in Ghana every week.

Traders rummage through mounds of imported clothing in search of high-quality pieces, but most of the time there are more scraps than gold. Because of their low quality, the majority of these goods are thrown away. They travel to landfills where they are frequently swept into the ocean.

Numerous African nations, including Nigeria, Zimbabwe, Ghana, and the Republic of Benin, among others, get enormous containers full of outdated electronics, including phones, kitchen appliances, and even vehicles that are unfit for use on western roads.

Mind you, the Agbogbloshie enclave in Ghana is infamous for its toxic waste contamination, which is primarily caused by electronic garbage. Young Ghanaians put their health in jeopardy everyday by removing copper and aluminium from waste products, among other items.

Similarly, before being sent to Africa, the heavily damaged cars were frequently engaged in gruesome accidents in the West.

The amount of waste the developed world produces and dumps into Africa cannot be overlooked. It seems abundantly clear that Western countries ought to pay African nations back for the waste they dump on the continent. A new entrant to this list is the British company Romco metals. The UK-based company began recycling aluminium at its facility outside of Lagos in 2015, spurred on by a rise in demand for the strong, light, and flexible metal on a global scale. The company constructed a second facility outside of Accra, the capital of Ghana, and now intends to develop at least three other factories across Africa, doubling production by 2025.

Despite the entire hullabaloo about “turning garbage into riches” or “providing employment opportunities for Nigerians,” the truth is starkly opposite.

In Nigeria, garbage heaps are an annoyance. The collection, sorting, and recycling of rubbish is depressingly uncommon in the country with the largest economy and population in Africa.

According to a report released by the UN Industrial Development Organization last year, Nigeria releases 200,000 tonnes of plastic into the Atlantic every year.

African countries have frequently been the scene of instances involving the dumping of hazardous garbage. The continent continues to be disproportionately impacted by the dumping of hazardous chemical materials, as evidenced by the toxic waste barrels in Koko, Nigeria in 1988, the Probo Koala scandal in Cote d’Ivoire in 2006, and the current piles of e-waste endangering the health of West African communities.

The 1989 Basel Convention forbids the transport and dumping of hazardous waste from developed nations to poor nations. However, the convention, like many other initiatives started by the United Nations, merely remained a name in practise.

The contemporary environmental movement is correctly referred to as a manifestation of neo-imperialism by Paul Driessen in his book Eco-imperialism: Green Power, Black Death. The movement enforces the perceptions of primarily affluent, at-ease Americans and Europeans on predominantly destitute, poor Africans, Asians, and Latin Americans. It infringes on these people’s most fundamental human rights by denying them access to the economy, the ability to live better lives, and the right to rid their nations of diseases that were long since wiped out in Europe and the United States.

Also Read: The hands of genocidal queen of England were drenched in the blood of millions of Africans

African nations like Nigeria and Ghana should follow suit and implement a ban on the import of all hazardous and radioactive wastes in order to protect the environment and population health in their respective nations. They should also forbid the disposal of hazardous wastes in landfills or incineration, as well as encourage the reduction and management of hazardous waste trans-border movements within the continent of Africa. They should not be fooled by promising terms such as ‘employment generation, economic growth etc’, which the West uses to have its say.

It’s time to reevaluate the existing environmental movement, which represents the interests of the industrial nations. If the world is serious about combating climate change, it must take into account the voices of African, Latin American, and Asian people.