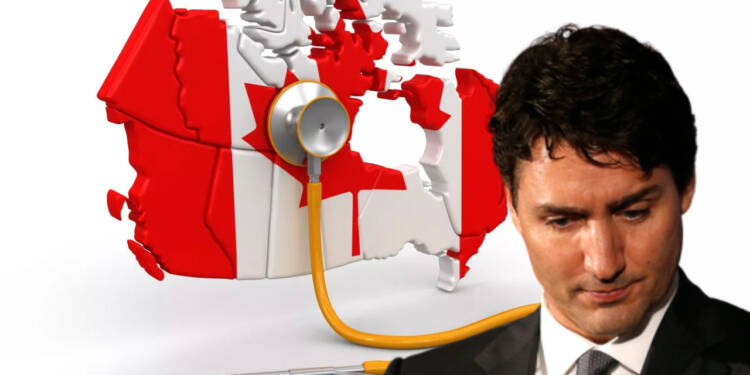 Well, this is not something we are making up in thin air, but this is what the devastating healthcare situation in the country indicates. Canada’s healthcare system is in shambles. And the medical organizations in the country are pleading for help.

We know how Justin Trudeau’s government continues to fail miserably in every sector. Be it agriculture, tourism, or even health, the crisis continues to remain up in the air until he is sitting in the driver’s seat.

Hospitals in Canada are now running understaffed. They are experiencing a crisis with backlogs, delayed services, and temporary closures. Hospitals in Canada continue to shut down their emergency departments. One such hospital in the province of Ontario, Canada shut down its emergency room one night in March. It is believed to be the first unplanned closure in Ontario since 2006. But now, what raises eyebrows is that it is becoming a trend in the whole of Canada.

With an underfunded public health system, Trudeau is ringing the death knell for poor Canadians. Canada already has some of the longest health care wait times in the world, but now those have grown even longer, with patients reporting spending multiple days before being admitted to a hospital.

Since then, dozens of emergency rooms across the Canada have been forced to shut down. Now, why is this happening? Why can’t Trudeau’s Canada provide its citizens with a facility as basic as healthcare? Why is Trudeau risking the lives of a million innocent Canadians? Because they have a shortage of workers.

Canadian hospitals are nearing breaking point due to a scarcity of nurses who have been forced away from the profession by unsafe working environments, wage dissatisfaction, and pandemic-related burnout.

In Newfoundland and Labrador (Canada), the emergency room at one community hospital in a region of more than 300,000 people was closed from July 1 until August 29.

With intense stomach pains and unable to eat or drink, Ms. Jiricka was assessed by nurses who thought she should be admitted, but for three days there were no open beds in the 407-bed hospital. She sat in the emergency waiting room, in pain, until one became available.

“Honestly, the only thing that got me through were the other people who were waiting,” said Ms. Jiricka in a phone interview with New York Times from her hospital bed.

Lately, despite the teetering conditions of healthcare, Trudeau has been on a spree of firing doctors in some provinces. Just for the sake of not getting a booster jab. So, the staff in hospitals lost their jobs to Justin Trudeau’s mindless vaccine mandates first. And now, they are voluntarily quitting their jobs due to wage dissatisfaction.

Both the health of individual Canadians and the state of the healthcare system are significantly impacted by the deficit. But, where is Trudeau? Certainly, missing in action. At times, when so many things are falling apart in Canada, liberal poster boy Justin Trudeau is nowhere to be seen. He’s absconding from facing the grave crisis that Canada is reeling under. Perhaps he is busy fulfilling his government’s commitment to fighting discrimination and supporting diversity.

Recently, Trudeau launched a five-year, $100 million initiative to support 2SLGBTQI communities across the nation, describing it as a historic first. He boasted about his government’s initiative to save the community from discrimination and whatnot. But, what about the country’s healthcare? If you are expecting solutions from him on the healthcare crisis, then you’re probably backing the wrong horse.

Nurses’ unions and other medical organizations are pushing for provincial governments, which administer health care in Canada, to declare the situation a “state of emergency” and direct more funding to address it.

Dr Paul Parks, president of the emergency medicine section of the Alberta Medical Association, has said, “It is really a disaster mode because the definition of a disaster in medicine is that the demand outstrips the ability to supply care. That’s what’s happening every day in our hospitals across the country.”

The United States and other countries, including England, are grappling with a similar crisis. But, countries know how to combat and fix the issues. Some U.S. states have tried raising nurses’ wages, and Oregon called in 1,500 National Guard to help overwhelmed staff, in desperate attempts to fill the gap.