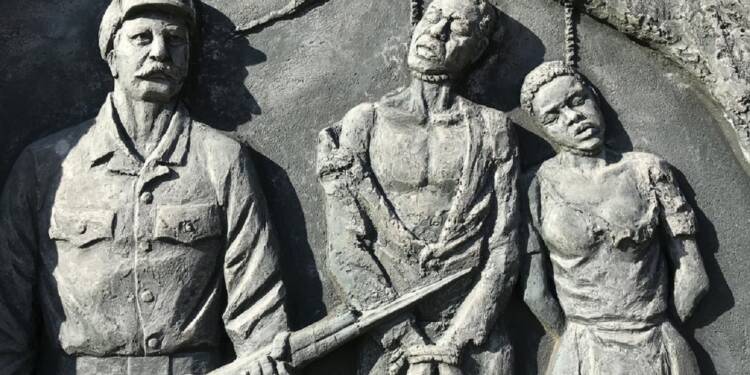 Namibia has reached a ‘genocide’ deal with Germany. This deal was to put an end to years of negotiations to recognize the genocide of indigenous Herero and Nama people during the German colonial period in what is now Namibia.

German troops massacred tens of thousands of Hereros and Namas between 1904 & 1908, during its colonial rule. It has taken nearly 6 years of talks for Germany to acknowledge its colonial crimes as ‘genocide’.

However, it seems that rather than healing the wounds, Germany’s reticence has led to more resentment in Namibia.

In May 2021, after years of bitter negotiations, Germany acknowledged it had committed “genocide” in this southern African territory, which it colonized between 1884 and 1915, and promised a development aid of 1.1 billion euros over 30 years to benefit the descendants of the two tribes. However, despite carrying out such crimes against humanity, Germany is yet to accept that it owes Namibia not only an apology, but reparations as well.

Apparently, Germany stressed that the reparations worth 1.1 billion euros are aid and would be paid on a “voluntary basis”. The Germans said that the agreement was not comparable to “reparations”. Such is the high headedness of an erstwhile colonizer who has carried out systemic genocide over decades.

What is more surprising is the fact that the tone of the Germans makes any sane person question that, is this so called aid of theirs, really an apology on their behalf or is it just buying off an apology?

So, Even though Germany has finally acknowledged its colonial crimes but is it really sorry? Or is it just an eye wash for the western world as well as Africans, so as to have access to the resource rich African continent in face of crises it is facing back home.

Now, the leader of Namibia’s largest opposition party People’s Democratic Movement’s (PDM) McHenry Venaani said that he had written to German Foreign Minister Annalena Baerbock asking for renegotiation of the genocide agreement reached last year between the two governments. He called for the agreement to be “renegotiated” and “restructured”, as reported by DW.

Citing that the descendants of the Herero and Nama had not been sufficiently involved in the settlement and the magnanimity of their loss not considered properly, many Namibians have rejected the agreement.

Further, Venaani has called on Germany to rework the agreement that would satisfy both groups, as in the deal, “Reparations have not been recognized as a consequence of the admission of genocide,” Venaani said.

Namibia’s Opposition leader McHenry Venaani wants a clear, legal recognition of the genocide by Germany. He has also termed the aid deal by Germany as an “insult” in interview with DW.

“It’s not about extracting the largest possible sum. We are only asking for a package that will sustainably improve the socio-economic conditions of the affected communities,” Venaani said.

Surely, German government’s half-baked apology has not gone down well in Namibia and Germany must face the heat. Besides, the fact that Germany wants to give the compensation in the form of aid and not reparations has raised doubts about Germany’s true intentions. Unfortunately, the Namibian government couldn’t stand up to such terms even after years of negotiations and despite the fact that their ancestors faced mass genocide and were brutalized during the colonial rule. The massacres of the Herero and Nama people are considered by many historians as the first genocide of the 20th century. In total, at least 60,000 Hereros and about 10,000 Namas were killed between 1904 and 1908 during German colonization in Namibia.

This is a deal that only makes Germany look good on the international stage but Namibians can see through this “sham” agreement and therefore it’s the opposition party that is hell bent on renegotiations with Germany. Now the ball is in Germany’s court to atone for its colonial sins.