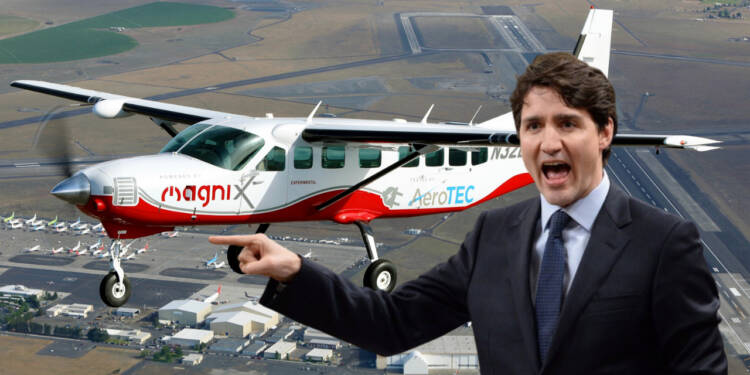 By now we all have understood Trudeau’s obsession with climate change and going green. His obstinacy and illogical policies are already gravely hurting the economy, food security, and various other sectors. Be it the general population, farmers, or experts, all have expressed alarm over this. But Trudeau has turned a deaf ear to everyone and everything.

Now in his next irrational bid, Canadian planes are going green!

Air Canada has announced that it has invested in Heart Aerospace, an electric aeroplane startup, and is ordering 30 units of a new version of its first electric aircraft. Air Canada has also gained a $5 million equity stake in the Swedish manufacturer.

In a statement, Hear Aerospace revealed, “The new airplane design, called the ES-30, is a regional electric airplane with a capacity of 30 passengers. It is driven by electric motors powered by batteries, which allows the airplane to operate with zero emissions and low noise.”

The new aircraft is planned for commercial flights in 2028.

But will the transition to electric aircraft going to be so simple? The answer is a fervid no.

Why? Let understand that in simple language.

First of all, what exactly is an electric aircraft?

As the name suggests, an electric aircraft is an aircraft powered by electricity. And electricity can be supplied by a variety of methods, the most common being batteries. Similar to other electric vehicles, the idea behind electric planes is to reduce their carbon footprint and minimise their negative impact on the environment.

How do these electric planes work?

Instead of using jet fuel to power an engine, electric planes instead utilise batteries to power an electric motor. They require a battery as well as a motor that can convert electrical energy into mechanical energy.

On the surface, it looks like a viable and sensible solution to the environmental problems that normal planes cause. But here comes the catch. The batteries which are used in these “green planes” are heavier for aeroplanes to stay up in the air. Not only that, these batteries can rupture easily, short-circuit, catch fire, and are toxic. And above all of that, these are also expensive. Along with these fundamental issues, there is a serious risk of high-voltage batteries leading to electrocution.

Even the experimental flight of such aircraft has seen failures. Last year, an experimental plane crash-landed in a field near Cranfield Airport in Bedfordshire, England when its battery got switched off. The plane was part of an experimental program to provide aircraft propulsion systems with zero emissions and lower noise. The aircraft was “severely damaged” in the crash-landing.

Read more: Emergency rooms are collapsing like a house of cards in Canada, and it’s all Trudeau’s fault!

Another major issue with these planes is their range. You see, the current range of electric planes is small, which is quite impractical in the case of flying to distant destinations.

Interestingly, even the electric vehicles on the road are struggling to overcome these challenges. To picture this technology thriving in the air ought to be a distant dream! Also, significant studies in this field have found that it will take at least 25–30 years until a safer technology is developed for commercial electric aircraft.

However, Trudeau’s Canada cannot wait. . Though scientifically, fully electric flights are still a few decades away. Yet for Canadians, they are going to be available really soon. All because the Crime Minister’s checklist includes using poor Canadians as a scapegoat for his green agenda. And, he will not give up until his sinister dream takes the lives of millions of naive Canadians!