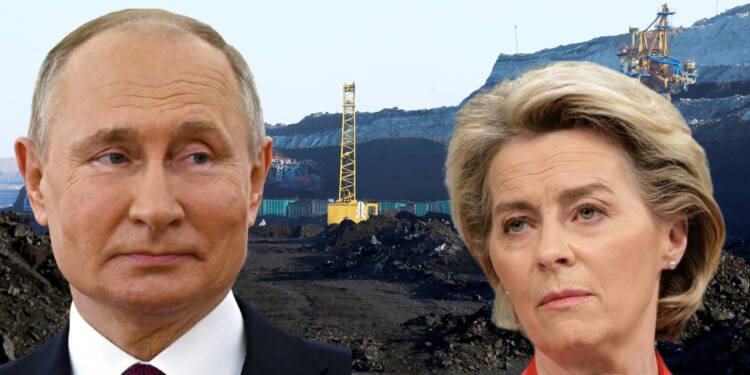 As the war in Ukraine began, European nations imposed sanctions on Russia to hurt it economically and financially. In the sixth package of sanctions against Russia, the European Union (EU) banned all imports of Russian coal. The ban was agreed upon in April with the import wind-down period ending on 10 August.

With an oil embargo on Russian seaborne oil authorised in June as part of the sixth round of sanctions and scheduled to go into effect at the end of the year, coal was the first Russian energy source to be sanctioned by the EU.

The commission has stated that its sanctions forbid EU companies from transferring coal and other services, such as finance and insurance, to any shipments of such goods coming from Russia.

But, amidst the gas crisis, many Europeans are concerned about the growing expense of feeding families and heating houses. Due to the ongoing war in Ukraine, Europe is already preparing for what may be a long and chilly winter. But Europe cannot simply reduce its reliance on Russian energy.  To do so, it would need a substitute. And many people believed that this replacement would come from renewable energy sources like wind and solar, but at the moment, that is not the case.

The truth is that renewable energy sources are unable to meet Europe’s needs for energy. As a result, Europe is relying on an energy source that it had been seeking to wean itself off, i.e, Coal.

Due to the energy crisis affecting Europe, several countries, such as Germany, Austria, and the Netherlands, have switched back to coal in an effort to save and stockpile gas before the winter.

The International Energy Agency predicts a 7% increase in coal usage in the EU this year. Currently, there is such a huge demand for coal that the price has tripled from $134 per metric tonne at the beginning of the year to over $400 per tonne. Even for small businesses, there has been a significant rise in Colombia.

Their capacity to adhere to the European Climate Law, which sets the intermediate goal of lowering net greenhouse gas emissions by at least 55% by 2030 in comparison to 1990 levels to achieve carbon neutrality by 2050, has been impacted by the move.

Also Read: So, neither Ukraine nor Russia was the target of the war. Europe is, and Biden proves it

EU has taken a U-turn on sanctions against Russian coal. According to the new guidelines from the European Commission, the executive branch of the EU, the transfer of some items, particularly coal and allied products, “should be allowed to combat food and energy insecurity around the world.”

A number of EU member states have reacted negatively to new guidelines from the EU, which they worry could relax sanctions and may open up international trade in vital Russian commodities like coal.

During meetings between European ministers, member states such as Poland and the Baltic states opposed the EU’s amended sanctions advice, according to persons familiar with the discussions. The nations had requested that the text not be published until the issue was addressed.

The guidelines, however, perplexed the group of nations, who noted that the revised text made references to coal, some cement products, and lumber. Diplomats have requested further information from the commission on the anticipated action out of concern that it would go beyond past promises to food security and, in effect, weaken sanctions on particular Russian goods.

Following the implementation of EU sanctions in August, Bloomberg reported last week how a ship under Greek management had transported coal from Russia to Turkey.

In the disguise of food security for third countries, Europe has removed sanctions on Russian coal and lumber. Well, winters are approaching and gas isn’t as readily available as it was. It already is filling its grain warehouses with Ukraine grains which it promised to send to poorer nations. This decision is therefore along the same lines.