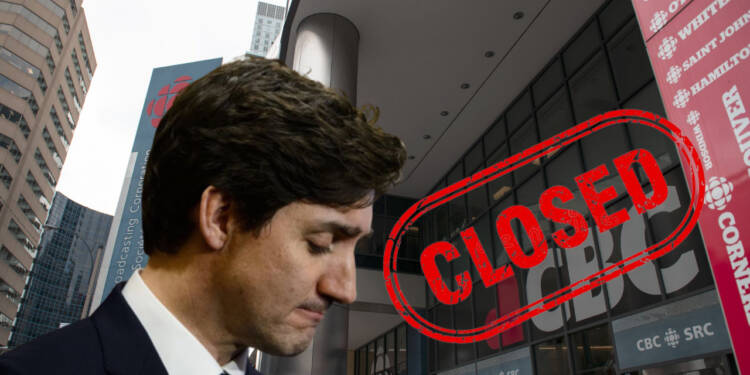 Ever since Trudeau came to power he hitched his wagon to the state’s media networks. One of which was the CBC news media network. The agency’s employees have long been bathing in a pool of money but all good things must come to an end, right?

We know, the Liberal party is done with the liberal poster boy now. Justin Trudeau seems to have run his course, not only as the PM of Canada but also as the leader of the Liberal Party. He is now seen in a negative light even by the liberal voters. They could shift their allegiances towards the other left-leaning parties anytime and it would be a nightmare for the liberal party.

Trudeau’s game is almost over but wait, somebody else is also breathing its last now- the CBC.

The CBC news media got busted for minting money for biasness. This year, two former CBC employee whistleblowers have slammed the CBC for having bias leading to its fractured accountability.

Under Trudeau’s regime, the politics of the public broadcaster changed dramatically. Even the employees have agreed to embrace cognitive dissonance and abandon journalistic integrity.

In July, Marianne Klowak who worked at CBC also quit. “I tried to push through a number of stories that were censored and cancelled. We were no longer committed to truth and honesty,” she said.

Moreover, employees of CBC and even the liberals have now come in unison to support the defunding of CBC. Recent polls suggest about 32% of liberals have given a clarion call for the move.

Read More: Why the Liberal Party won’t give Trudeau another chance

In 2020, The Post Millennial wrote an article titled “CBC watched by only 3% of Canadians but funded by 100% of the population.”

Lorne Gunter of the Sun said, “Canadian Broadcasting Corporation advertising revenues are off a third in the past decade (18% in the past year alone), because fewer and fewer Canadians are watching the state broadcaster and advertisers know it.”

Now, what draws concern is the fact that despite ratings-so-low CBC continued to pay bonuses to employers worth over 30 million dollars between 2020 and 2021, as discovered by Blacklock’s Reporter.

The documents, first obtained by Blacklock’s Reporter, show that in 2020 — Canada’s first COVID-19 case came in late January that year — the public broadcaster spent $15 million on bonuses to employees. In 2020, there were 1,034 full-time employees who received bonuses. On average, that’s about $14,500 per employee. Then, in 2021, with the pandemic in full swing, $15.3 million was paid out. There were 1,033 full-time employees who received bonuses. That’s an average of about $14,800 per employee.

You see, CBC is a corporation funded by the government. Every now and then, CBC worked really hard to help the government with compromised reporting when the need occurred. The large viewership gave them the confidence to spill out anything in the garb of news.

Kowtowing to Trudeau has long been the USP of CBC. But, it’s high time now. The Canadian populace won’t let their taxes go to a politically funded media portal anymore. Amidst the end of Trudeau’s era, Trudeau’s media is also seeing its last days in Canada.