Albertans believe that Trudeau is a dictator-in-making. It is not a baseless belief or a made up rumor as there’s a solid reason behind this thinking of the Albertans 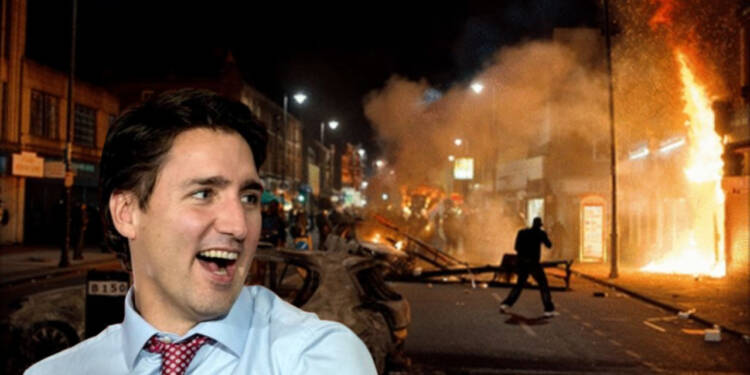 We all know that if you live in a democratic country you have the right to peacefully protest, but the Canadian Prime Minister will start raiding your houses if you do so in Canada.

Let’s take a look at the recent event in memory- the Freedom Convoy. The February protests that turned into a ‘gong show’ was controlled by the Trudeau government by using extraordinary powers and invoking Emergencies Act for the first time. Questions and inquiries were raised in Canada to understand the need for the government to resort to such drastic and draconian measures. Although to no one’s surprise, the government led by Trudeau failed to respond satisfactorily.

The protests saw most of the agitators coming from the Canadian province of Alberta. And that is what led Trudeau to run a conspiracy. A conspiracy against the Albertans.

According to a report by the NYT, in February, police raided a house in the Coutts village of Alberta. Many residents of the village recalled this happening as the biggest event that occurred in their small village in recent memory. During the said raid, police revealed a frightening cache of weapons from the house. Now, what’s distressing is that the villagers’ believe, the whole raid was a hoax perpetrated by the police to silence an anti-government protest.

Read More: Freedom Convoy ghost is back to haunt a numbed Justin Trudeau

“It may have been a conspiracy,” said Bill Emerson, who for four decades has lived across the street from the home the police raided.

“The weapons gave the government a pretext for suspending civil liberties,” he said. “Maybe somebody planted the guns.”

What’s worth noting here is that the raid came at a time when the streets of Ottawa were full of honking that went louder than the pops you get when playing the walls of Jericho. Trudeau’s pet police raided the house during the Trucker’s protest.

It is not far-fetched to say that the seizure of weapons was intended to demonise the protestors and, in turn, snatch their civil liberties easily.

The Freedom Convoy movement — that at one point aimed to replace the federal government with a ruling committee including protesters, and which Mr. Trudeau dismissed as a “fringe minority” with “unacceptable views” — is hardly a fringe. Months later, it still garners the support of one in four Canadians. Also, some of its beliefs have even entered the mainstream politics.

For those who do not know here’s a little glimpse about the Freedom Convoy Movement.

The Freedom Convoy started as a small group of western Canadian truckers, their family members, and friends, with a belief that “freedom” is constantly at war with those who want to limit it, and that it must be defended at all costs.

In mid-January, the group decided to peacefully protest against the Trudeau regime’s stringent Wuhan virus policy as it was stifling their freedom. The policy restricted anyone from going to work, restaurants, gyms and even from travelling unless they were vaccinated. In protest, a huge convoy of trucks arrived in the national capital of Ottawa. The protest soon snowballed into a huge movement that resonated with thousands more. Their objective was to compel every level of government in Canada to repeal restrictive vaccine mandates.

Read More: Freedom Convoy is officially back in Ottawa as Trudeau resorts to a brutal crackdown

We witnessed that Trudeau didn’t leave any stone unturned in his efforts towards declaring the truckers protest anti-national and a threat to Canada’s security. It was reported that some security personnel were carrying batons, pepper spray and guns. One can only imagine just how brutal the authorities must have been to the protesters and how far they might have went to suppress the dissent.

Canadian PM Justin Trudeau thought he could get away with his brutal suppressing of the Freedom Convoy. He thought he could take away the civil liberties of innocent people by demonising the protestors. Yet, his undemocratic and immoral moves haven’t taken him far in his ambitions. Revelations like this always keep coming for him and keep questioning  his authority.