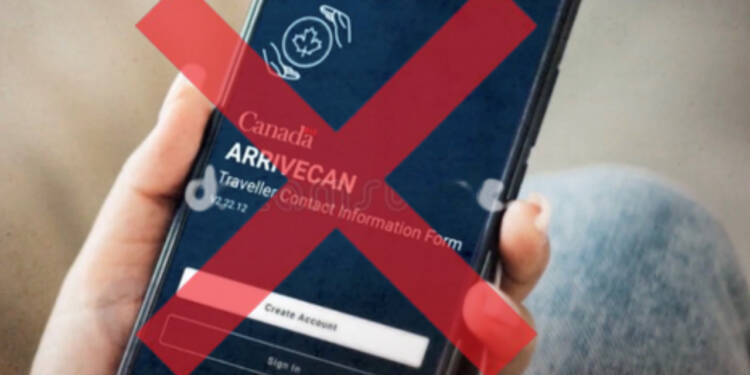 Atlantic Canada has been hit by Hurricane Fiona with unprecedented force. It has washed entire homes into the ocean and downed countless trees and power lines, leaving hundreds of thousands in the dark.

Thankfully, American crews showed up to assist the displaced Canadians. However, there was several hours delay. Yes, the crew was stopped by the Canadian border forces, and that too, for a very absurd reason. The usual culprit is ArriveCAN.

Assistance could have arrived hours ago, but once again Canadians were hampered by Trudeau’s absurd border regulations.

A U.S. power crew was unable to enter Canada to aid in the recovery from post-tropical storm Fiona because of the government’s ArriveCAN requirement, according to a report from Nova Scotia Power (NSP).

According to a statement NSP sent to Global News, there was “some issue relating to ArriveCAN” that caused the American crew to worry that they “may not be able to cross the border” to offer assistance and restore the power grid after the catastrophic hurricane devastated Atlantic Canada.

Reportedly, Jacqueline Foster, senior communication adviser for NSP, said in an official statement, “When we heard from our crews that there were issues at the border, we reached out to provincial officials to see if there was any help that could be provided,”

Thankfully, the issue was resolved hours later. However, the issue raises concerns about why the app was still mandated even at a time of crisis.

As the matter was brought up in the House of Commons, Conservative Leader Pierre Poilievre criticized Trudeau over conflicting statements made by his cabinet ministers over whether the federal mobile app delayed the American crew or not.

The conservative leader stressed, “Originally, the public safety minister denied that a delay had happened but only to be contradicted by the emergency preparedness minister, who said, in fact, there was an issue at the border.” Who’s saying the truth? No one has any idea.

The liberals answered: “Everything seems to be misunderstood”. As per them, the CBSA officers at both a regional level and at each border crossing were instructed to accelerate the process for U.S. power crews to cross the border to lend assistance.

Now, look at what Emergency Preparedness Minister Bill Blair has to say about the delay. When asked about ArriveCAN causing delays for the U.S. crew, Mr. Blair confirmed the delay and said, “ I was advised that there was a concern about it, but before any steps could be taken, the matter was resolved.”

Furthermore, even Canada Border Services Agency (CBSA) had “no record of such a situation occurring at any Port of Entry into Canada,”

Nova Scotia’s premier’s office stood by the allegation that there had indeed been an issue at the border. Nova Scotia Power also acknowledged that there had been concerns raised by the U.S. crew. Honestly, this is what a banana republic looks like. Zero responsibility.

Hurricane Fiona made landfall in eastern Canada last Saturday, bringing with her strong winds, torrential rain, and power outages for tens of thousands of individuals.

There have been numerous reports of blocked and washed-out roads as crews start inspecting damage in places where the storm has passed. The strong storm toppled a number of trees around the region, some of which fell into power lines, cars, and residences.

However, when neighbours offered assistance to enter Nova Scotia, the CBSA encouraged them to install ArrivaCAN. This is such a silly and foolish attempt on the part of Canadian officials.

Read More: Awww! Canada will give mild punishment to drug traffickers because they are poor people trying to survive

Think about the additional misery that Canadians in Nova Scotia experienced over the course of these few hours. Hours ago, the restoration may have been finished. Ottawa, however, decided to give the COVID-19 regulations top priority. As if the hurricane wasn’t a major issue for them.

There is no question that the strict vaccine mandates need to be abolished as soon as possible.