It would indeed be wrong to assume that Meloni would go in all guns blazing against the EU. Rome is deeply indulged with the EU and would continue its cooperation no matter the government 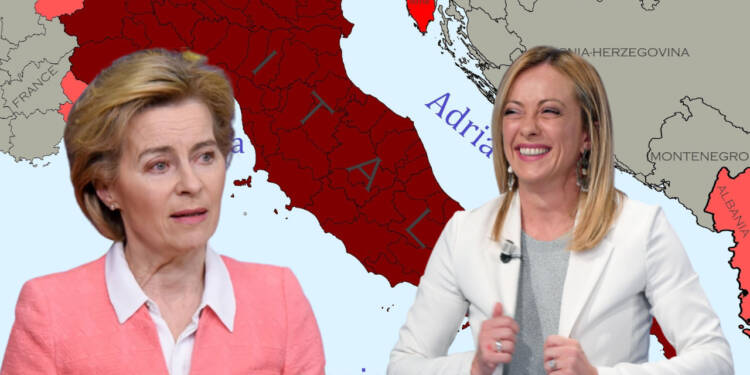 Italy has finally gone right and EU leadership does not seem to be happy with this development. The people of Italy have given their mandate and chosen Giorgia Meloni as their leader. With this, they have finally ended the era of political instability in the nation.

Meloni and her coalition partners share unique views on how the nation is to be liberated from the turmoil it finds itself in. Many believe that the change in leadership would result in a struggle between Rome and the EU but maybe that is exactly what Italy needs right now.

Meloni led a right-wing coalition to a slim majority in the Italian Parliament. Her party, Brothers of Italy, along with Matteo Salvini’s League and Silvio Berlusconi’s Forza Italia, received approximately 44 percent of the vote.

Evidently, the EU President Ursula von der Leyen made comments concerning the Italian elections. In fact, she threatened the new government in making.

The European Commission chief reportedly said, “The EU is willing to work with any democratic government. However, that’s the beauty of democracy. We’re sometimes slow. We talk a lot, I know. But that’s democracy too,”

“Still, we’ll see if things go in a difficult direction – I’ve spoken about Hungary and Poland – we have tools,” she further added.

These heinous comments left the Brothers of Italy and its supporters in a huff. Matteo Salvini, leader of the League, one of the members of the three-party coalition, wrote on Twitter, “Shameful arrogance. Respect the free, democratic, and sovereign vote of the Italian people! Friends of all, servants of none,”

It is natural for Ursula to think that the Meloni camp would take the EU head on. Meloni branded Putin’s 2018 re-election as an “unequivocal” sign of the “will of the people”.  Also, her politics has direct lineage to those of another leader of Italy, Benito Mussolini, Il Duce, the Fascist who ruled from 1921 to 1943. Although, the EU chief might be wrong in her analysis. Meloni is a smart leader and would surely try to strike a balance between the EU and her love for Putin.

The right wing has also endeavored to make things right with the EU. Meloni and her allies have taken a seemingly united stance on the war, condemning Putin in an attempt to nullify scrutiny for previous Moscow-friendly standpoints. In addition, the right-wing alliance has also shifted toward a more hostile approach to China over the past few years.

The Brothers of Italy has long sought closer ties with Taipei. In the early days of the 2022 electoral campaign, Meloni met with the Taiwanese representative to Italy, Andrea Sing-Ying Lee, tweeting that she will “always stand by those who believe in the values of freedom and democracy.”

Therefore, it would indeed be wrong to assume that Meloni would go in all guns blazing against the EU. Rome is deeply indulged with the EU and would continue its cooperation no matter the government.

One thing however would change, the ardent support of the previous Draghi administration to Ukraine would be halted. The Pro-EU Draghi administration supported Ukraine despite things being hard at home. As a result, Italy plummeted further into economic turmoil with inflation reaching record breaking highs.

The Meloni alliance is expected to curtail the blind support to Ukraine and initiate discussion with Russia to ensure Rome’s energy security which is in serious trouble as of now.

It looks like Meloni would go the ‘Orban way’. Viktor Orban, the leader of Hungary, has long maintained a smart approach between Russia and the EU. He refused to condemn the Russian invasion and refused to sanction Moscow. It helped him maintain energy security at home.

A balanced cooperation with the EU on the subjects of Covid funding, trade, security and with Russia on energy would indeed help Meloni ensure a fast financial recovery. But yes, to answer the elephant in the room, the Meloni camp would indeed be a Russian dove. Even if Meloni resists, in an attempt to shield her image, her coalition partners will ensure cooperation with the Russians.

Salvini has repeatedly insisted on the need to re-evaluate sanctions against Moscow, as these “are not damaging the sanctioned party but rather those who are imposing the sanctions.”  On the other hand, Berlusconi’s personal friendship with Putin dates back to their first encounter in 2001. He has long supported the Russian leader in both Crimea and Ukraine.

In conclusion, the rise of the right wing in Italy would for sure add Italy to the privileged grouping of rebels along with Hungary and Poland but it looks like that is something Ursula would have to make her peace with.