Zelensky has never cared about the people of Ukraine. And now, he has even put Ukraine’s sovereignty up for sale for his masters in the oval office. 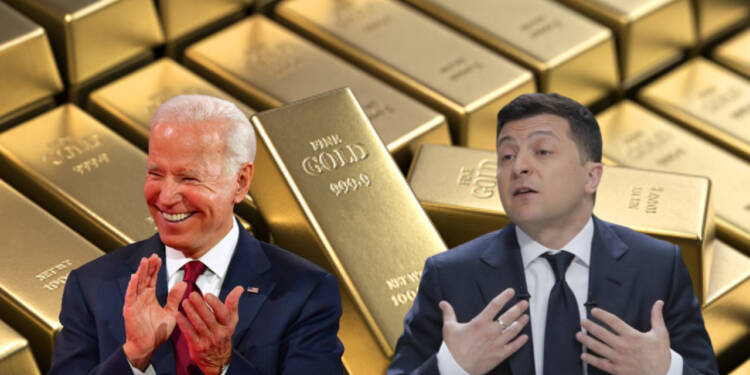 Needless to say, the Ukraine war has almost vaporized the country’s economy. Since exports have plummeted, the nation has largely looked for foreign help and low-interest loans to stay afloat. Ukraine has also requested a debt freeze to support its ailing economy.

As per estimates, Ukraine’s GDP has crashed by at least 45 to 50 percent. Ukraine’s finance ministry announced recently, “The disruption to fiscal cash flows and increased demands on government resources caused by the war has created unprecedented liquidity pressures and debt servicing difficulties.”

Zelensky also deftly requested grants rather than loans so that Kyiv is not required to repay the money to the donor nation or organization.

However, it seems like Ukraine has paid a hefty price for the support it has received from the Western nations. Since the start of the war between Ukraine and Russia, Ukraine has received a significant quantity of both military and financial aid. NATO, under the direction of the US, has recklessly aided Ukraine in its conflict with Russia. Especially US has sent Ukraine military and financial aid worth billions of dollars over the last 8 months.

Now, it has been revealed that in return for the help provided, the majority of Ukraine’s gold and foreign exchange reserves have been looted by the West. The political elites in Washington DC, and Brussels have not gone empty-handed from this carefully orchestrated conflict.

In July, Reuters reported that since the war began in February, Ukraine has sold gold worth $12.4 billion. According to the deputy governor of Ukraine’s national bank, selling gold was vital to keep the nation operating. He declared, “We are selling (this gold) so that our importers are able to buy necessary goods for the country.”

However, it was not immediately known to whom the gold was being sold. But, now the facts are out in open. It’s Biden’s US that has plundered all of Ukraine’s gold wealth.

Gold is essential to a country’s sovereignty. Biden carefully exploited former comedian Volodymyr Zelensky to his use, used him as a pawn in the war and stripped Ukraine of its gold while also stuffing Zelensky’s pockets with dirty cash at the same time.

Gold reserves can aid a country’s currency. When gold prices rise, a nation with rich gold reserves sees a boost in its economy. To put it another way, gold is not just a tangible asset but a vital element of a country’s sovereignty and economic independence.

Along with government bonds, gold is one of the most important reserve assets globally. But one can’t expect a comedian to show rationale on such important issues. Speaking of Biden, minting billions out of the Ukraine conflict has been his sole agenda from day 1.

As Kyiv surrenders its gold to Biden, it comes as no surprise that Ukraine’s central bank has devalued the Ukrainian currency hryvnia by 25% against the U.S. dollar. Now, US can easily turn Ukraine into its vassal state as Kyiv’s financial system would now survive at Biden’s mercy. Ukraine has not just lost its gold, but also its sovereignty and respect.