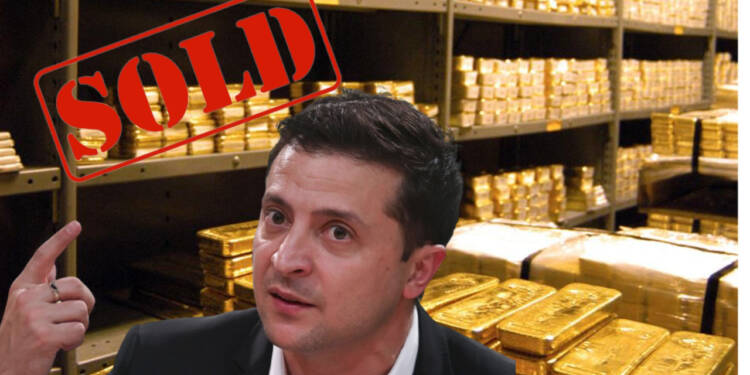 Reuters reported on Sunday that Ukraine has sold gold worth $12.4 billion since the start of the war in February. The deputy head of Ukraine’s central bank announced that selling gold was necessary to keep the country up and running. He said, “We are selling (this gold) so that our importers are able to buy necessary goods for the country.”

The data doesn’t add up!

So far so good! However, the devil lies in the details! The question is, how come Ukraine sold this much gold? As per Schiffgold.com website, the National Bank of Ukraine (UNB) held about 27 tons of gold in its reserves valued at about $1.6 billion when the war started. This data can be verified at Gold.org website.

Where did the extra gold come from?

The data doesn’t add up! To put things into perspective, Ukraine has sold more than seven times its total bullion holdings. Where did this extra gold worth $10.8 billion come from? Maybe a quick ramp-up in mine production? Ukraine sits over gold reserves of more than 3,000 tons. However, a Mining World report claims that the country had only a few operating mines before the invasion.

It’s quite possible that Ukraine might have sold gold given to it by other nations. The other possibility is that the country might be tapping into domestic gold supplies held by commercial banks or other institutions. Whatever it is, it’s clear as daylight that Ukraine actually did sell gold that never existed in its coffers.

Needless to say, the war has taken a heavy toll upon the country’s economy. Exports have tumbled, and the country is now counting on foreign aid and easy loans to keep itself afloat. Reuters reported yesterday that Ukraine has sought debt freezing because the war has ravaged its economy.

Reuters reported, “Ukraine has asked its international creditors, including Western powers and the world’s largest investment firms, to freeze its debt payments for two years so it can focus its dwindling financial resources on repelling Russia.”

As per estimates, Ukraine’s GDP has crashed by at least 45 to 50 percent. Ukraine’s finance ministry announced recently, “The disruption to fiscal cash flows and increased demands on government resources caused by the war has created unprecedented liquidity pressures and debt servicing difficulties.”

Zelensky had also issued a decree earlier this week that his country will require aid worth at least $9 billion per month to survive that the West must provide it with. Taking a leaf out of Turkish President Recep Tayyip Erdoğan’s playbook, he’s now threatening the EU with a huge migrant wave of Ukrainian asylum seekers if Ukraine’s coffers are not replenished.

The war has choked Ukraine’s economy. It has so far managed to make both ends meet under the West’s auspices. However, as the burgeoning energy crisis wreak havoc on European economies, the West may soon start developing cold feet on the question of spending billions of dollars in aid to Ukraine. So, Ukraine has now resorted to selling gold that doesn’t even exist, to shore up its economy. But this strategy can only delay Ukraine’s defeat in the war, not avert it permanently.

‘Puberty is sin, and sex-change is empowering,’ Biden’s health secretary has gone nuts