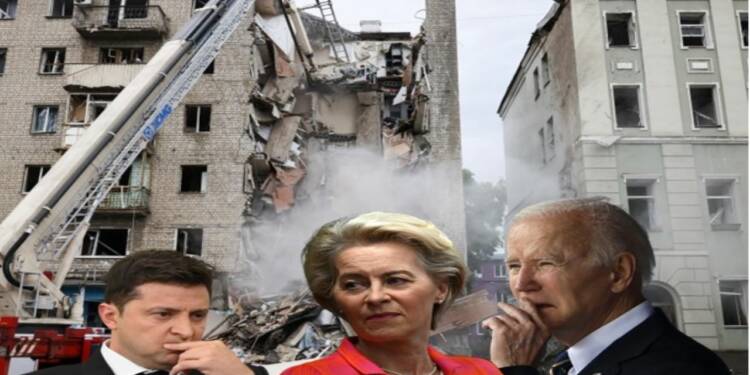 His Highness Volodymyr Zelensky of Ukraine issued a decree earlier this week that his country will require aid worth at least $9 billion per month to survive that the West must provide it with. Taking a leaf out of Turkish President Recep Tayyip Erdoğan’s playbook, he’s now threatening the EU with a huge migrant wave of Ukrainian asylum seekers if Ukraine’s coffers are not replenished.

On the other hand, Zelensky is also working overtime to strip EU of Russian gas and cause an economic tragedy in the continent. Zelensky, on Tuesday, blasted Canada for allowing Russian gas turbines to be flown back to Russia, which will soon enable the Russian gas giant Gazprom to stabilize energy supplies to EU. Ukraine is now demanding Canada’s federal court take legal action against the Justin Trudeau administration. And if he succeeds, all hell will break loose on Europe very soon.

EU fed up with Zelensky’s shenanigans

You see, Zelensky’s shenanigans are now getting on EU’s nerves. The West is fast realizing that Ukraine is turning out to be a major financial and security liability for it. So, they have now devised a plan to get rid of Zelensky once and for all. More than 40 nations, including US and various EU nations, are now demanding investigations into suspected war crimes in Ukraine. Reuters reported that, on Thursday, 45 countries at the conference in The Hague —headquarters of the International Criminal Court (ICC) — signed a political declaration to work together on investigations into war crimes in Ukraine.

Interestingly, this comes days after a UN research revealed that Ukraine was responsible for committing war crimes during the war. The UN report found that Ukraine purposely used a nursing home as a base for operations, perfectly knowing that they would be placing the residents and patients of the nursing house in grave danger.

Allegations of war crimes against Ukraine

It was unravelled that Ukraine had used innocent patients as human shield against the Russian assault. This revelation also confirmed that Russia was not seeking to kill ordinary Ukrainians as previously claimed by the Zelensky administration, and it was the Ukrainian army that was eying to capitalize upon Russia’s policy of not harming civilians.

Reacting to this UN finding, David Crane, a former U.S. Defense Department official and a veteran of numerous international war crime investigations said, “The bottom-line rule is that civilians cannot intentionally be targeted. Period. For whatever reason. The Ukrainians placed those people in a situation which was a killing zone. And you can’t do that.”

Read More: Ukraine officially admits that it was running a fake news factory against Russia

How Zelensky could be forced to step down?

Now, the relevant NATO and EU nations want an independent investigation to be conducted into war crimes allegedly committed by Russia and Ukraine. It’s highly likely that Russia would be framed for butchering innocent Ukrainians; however, Zelensky won’t be spared either! By digging deep into Zelensky’s human rights record and poorly controlled motormouth military regime, the West can make it a point to mount diplomatic pressure on Zelensky and eventually force him to stand down from his post. To put things into perspective, EU and NATO could simply sack Zelensky and replace him with a lesser menacing leader, citing his poor human rights record.

It seems that the West has had enough of Zelensky’s shenanigans. By exposing his dictatorial regime, the West and especially NATO would also be cunningly placing the blame for Ukraine’s loss on Zelensky’s shoulders and escape accountability. So, Ukraine might soon get a new leader, who will not only ensure a swift enactment of a ceasefire in Ukraine but also help the EU return to normalcy once again.

For the first time, Canada’s silent majority is favouring Conservatives over Liberals

Uber made a ‘kill switch’ button to evade raids. European leaders pressed the button in the firms’ favour