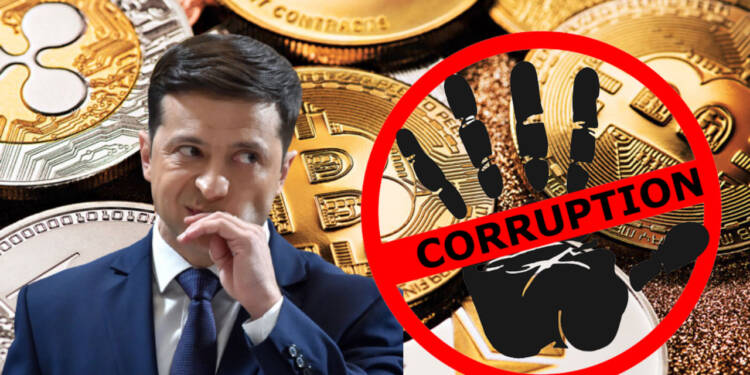 Ukrainian President Zelensky’s sins have no end. The man might not be an efficient military general and strategist but has perfected the art of persuasion and has used his skills extensively to bring in billions of dollars for his so-called “war effort”. Much of this amount has reportedly been spawned by corrupt Ukrainian officials.

You know, it is quite possible to hide the transactions backed by government authorities but how does one malign transaction made using advanced financial currencies like Bitcoin and Etherium that reportedly work on a foolproof technology known as Blockchain? Funnily, foolproof enough to bring out the corruption in the Zelensky regime.

Two days after the start of Russia’s special military operation, Ukraine’s Deputy Prime Minister and Minister of Digital Transformation Mikhail Fedorov announced Crypto-currency fundraising to support the country. Kyiv accepted almost all major denominations: Bitcoin, Ethereum, Tether, a number of lesser-known types, and even NFTs. Ukraine has been collecting multimillion-dollar cryptocurrency donations ever since. The amount reportedly is anywhere near 100 Million dollars.

You see, cryptocurrencies like Ethereum and Bitcoin have an edge over traditional means. They could easily be traded with minimum government intervention and can become very hard to trace if advanced methods are used and that is exactly what the Ukrainian leadership did. However, a good thing about cryptocurrencies is that they are corruption prone; i.e. one could hide the transactions but cannot erase them and it looks like Zelensky did not think about it.

Read More: The spoils of war: Biden controls almost every ounce of gold in Ukraine

After seven months of active hostilities, Ukraine reported spending only about 75% of the crypto funds collected, and this is taking into account only those amounts that are reliably known. Now one might question the intent of the Ukrainian leadership which is continuously asking for more and more funds from the West but is refusing to use what it already has.

If it were not enough, the details of the accounts where the cryptos were reportedly transferred paint a shady story altogether. Almost half the bitcoin of the Ukrainian government was sent to a crypto wallet which was created in 2018 and since then its turnover of funds has amounted to more than $6 billion. Interestingly, according to the Check Bitcoin Address profile service, this bitcoin wallet has been repeatedly used to receive money from fraud and blackmail. There have been reports of multiple shady crypto wallets with which the Ukrainian administration has made transactions.

Now, let’s get back to the funds that were spent. You see, even the purchases made using cryptocurrencies do not add up. For example, the DJI Mavic 3 drone, has become popular in the conflict, and costs between $2,000 and $5,000 depending on modifications. Now, Ukraine’s crypto transactions indicate the purchase of a drone for a staggering $55,800. Any expensive and advanced weaponry and hi-tech drones can only be bought using proper defence deals. Therefore, acquiring a simple logistics drone for such a staggering amount is surely a corrupt enterprise.

The Zelensky regime has already fooled his populations by forcing an unwanted war upon them and now he has fooled the West by siphoning the funds for himself and his generals, which the former had sent for the betterment of the people of Ukraine. It’s a pity for Ukrainian to have such a leader and a shame for the West to support such a corrupt head of state.