You see, first off, the US created this problem of terrorism in Nigeria. And now, it is laying the ground for interfering in Nigeria’s domestic affairs in the name of eradicating this menace. How convenient is that! 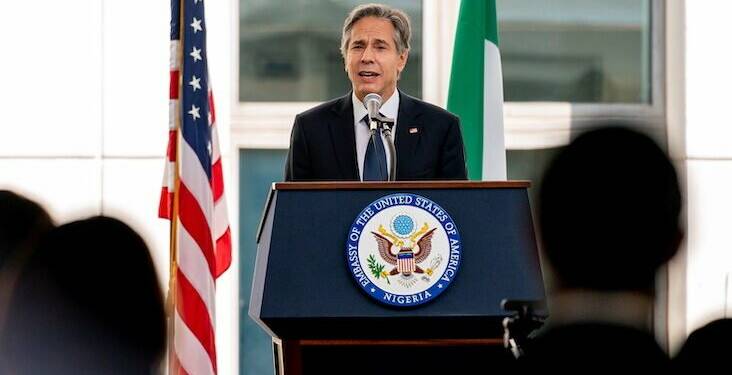 Elections in Nigeria: The US Secretary Antony Blinken unleashed a charm offensive on Nigeria by releasing a press statement. In the statement, he stated, “The partnership between our two countries is strong and is built on our shared values of democracy, diversity, and a spirit of entrepreneurship”.

The US leader further added, “We stand with Nigeria as a democratic partner in supporting free and fair elections and value leadership of Nigeria on global and regional issues including the fight to end the COVID-19 pandemic.”

Actually, by interfering in Nigeria’s elections, the Biden administration wants to ensure that it gets to control the results of the upcoming elections in Nigeria.

Another important part of Blinken’s statement was the pledge of fighting against terrorism with Nigeria. How ironic is that! Well, it’s the same US that created Boko Haram to destabilize Nigeria and wrest control of its vast mineral riches. You see, first off, the US created this problem of terrorism in Nigeria. And now, it is laying the ground for interfering in Nigeria’s domestic affairs in the name of eradicating this menace. How convenient is that!

And when such interventionist measures fail to bring up the desired results, the US resorts to deploying fatal means to have its way on foreign soil. For instance, CIA has a history of undertaking overseas covert assassination operations, in which foreign leaders are targeted who refuse to bow down to the almighty USA.

One of the targets of assassination attempts was Fidel Castro. The security in charge of Castro calculated that the Cuban leader was reportedly targeted 634 times. A film on this was also made which was titled “638 Ways to Kill Castro”. The obsession of CIA with the assassination attempts is that it cannot resist attempting to kill someone who is not under America’s control.

It is evident from the statement of Wayne Smith, the former head of the US interests section in Havana, said a few years ago, “Cuba seems to have the same effect on American administrations that a full moon has on a werewolf. We may not sprout hair and howl but we behave in the same way.”

Apart from Castro, the CIA is accused of attempting to take the lives of a slew of dissenting leaders around the world. These leaders include Kim Jong-un, Congo’s first prime minister, Patrice Lumumba, Dominican dictator Rafael Trujillo, President of Indonesia Sukarno and President Ngo Dinh Diem of South Vietnam among others.

Apart from assassinations, the CIA and other US-affiliated agencies also try to overthrow dissenting leaders when they fail at neutralizing them.

In Nigeria, the CIA exploits the country’s delicate religious situation and fuels terrorism on one hand, and the US Secretary comes out in the open pledging his support to Nigeria in the fight against terrorism on the other.

Blinken’s statement came in the backdrop of upcoming elections of Nigeria, and this election is going to be super-hot and controversial as there are 18 candidates running for the Presidential elections.

This will make the situation conducive for the USA to either install a puppet government in the country or further destabilize the country through Boko Haram to gain control over its resources.

Blinken’s charm offence is now out in the open; Nigeria has seen through it, and it will not get trapped in the dirty tricks of the USA.