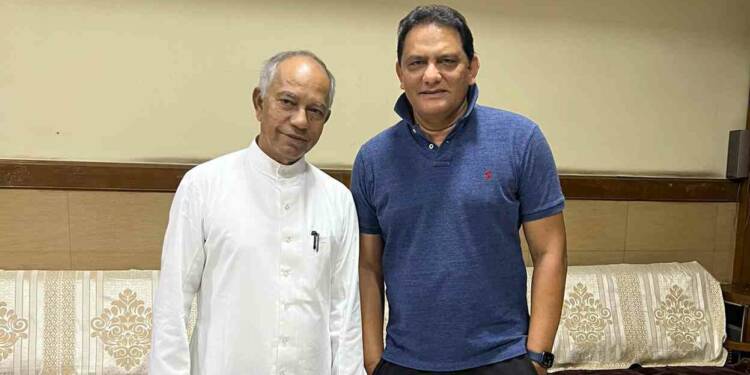 Mohammad Azharuddin is an Indian politician and a former international cricketer. He was born on 8 February 1963. He is the working president of the Telangana Pradesh Congress Committee and was the member of parliament for Moradabad. In this article we are going to talk about the biography, career, notable works, games and family of Mohammad Azharuddin so read the article till the end.

He played 99 Test matches and 334 One Day Internationals for the Indian national cricket team before his international career came to an end after he was found to have been involved in a match fixing scandal in 2000 and subsequently banned by the Board of Control for Cricket in India for life. In 2012, the Andhra Pradesh High Court lifted the life ban.

Mohammad Azharuddin is an international cricketer and he played so many games for India, and state this biography article is incomplete without talking about his career. So here you will gain info about his achievements and life story.

Mohammad Azharuddin was born on 8 February 1963. He was born in Hyderabad to Mohammad Azizuddin and Yousuf Sultana. He attended All Saints High School and graduated from Nizam College, Osmania University with a Bachelor of Commerce degree.

Azharuddin married his first wife Naureen in 1987 and they had two sons, Asaduddin and Ayazuddin. Ayazuddin died in a bike accident in 2011. After 9 years of marriage to Naureen, Azharuddin confessed of his relationship with actress Sangita Bijlani whom he said he fell in love with at first sight during an ad shoot in 1985.

Subsequently, Mohammad Azharuddin divorced Naureen and married Bijlani in 1996. They were married for four years until 2000 after which they got separated due to Azharuddin’s rumoured link up to badminton player Jwala Gutta. Azharuddin married Shannon Marie, his third wife, secretly and recently revealed about her.

Mohammad Azharuddin was known for his wristy strokeplay, much like Indian cricketer Gundappa Viswanath and Pakistani cricketer Zaheer Abbas. He made his debut for the Indian cricket team in Test cricket in 1984 against England at Eden Gardens in Kolkata on 31 December 1984, where he scored 110 in his first innings from 322 deliveries, alongside Ravi Shastri who scored 111, in what was ultimately a drawn match.

He subsequently scored two more centuries in his next two Test matches. He scored 121 against England at Lord’s in 1990. India was faced with the prospect of a follow-on when Azharuddin came in to bat at number five and scored his hundred off 88 balls in a losing cause. Former England cricketer Vic Marks called it “the most dazzling Test century” he had ever witnessed, in his column for The Observer.

Predominantly a middle order batsman, Azharuddin was known for his attacking brand of cricket and strong slip catching, though continuously struggled against the short ball. Azharuddin played 99 test matches for India and scored 6,215 runs at an average of 45.03, including 22 centuries and 21 half-centuries. His record in One Day Internationals (ODIs) was 9,378 runs from 334 matches at an average of 36.92. As a fielder, he took 156 catches in ODI cricket. Azharuddin started his career with a 110 against England in Kolkata in 1984 and ended with a 102 against South Africa in Banglaore in 2000 thus, becoming the only Indian and the fifth batsman ever to score a century in his first and last Test matches.

He won the 2009 Indian general election from Moradabad in Uttar Pradesh to become a member of parliament of India.

Azaharuddin had disclosed his intention to contest the 2019 elections from Secunderabad Parliamentary constituency in 2019.

We hope this biography article of Mohammad Azharuddin will be helpful for you to understand his journey and works.