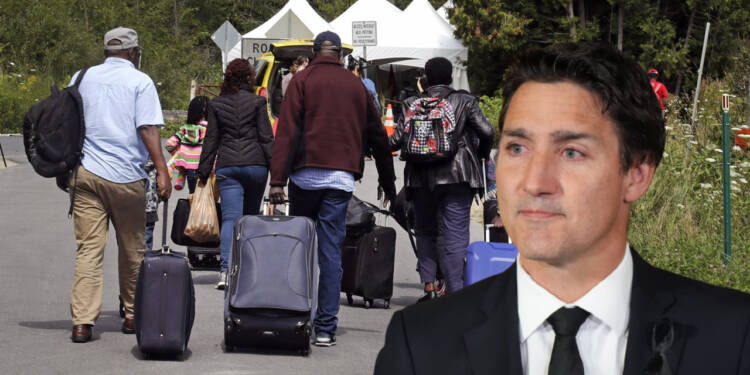 Quebec is up in arms against Trudeau’s illegal acts: The populace of Canada can never get enough of Liberals’ ethics scandals. Ever since Liberals held the fort they are clearly not getting sick of committing shady activities and yet pleading the Canadians to place trust in the government. Ridiculous.

But, wait, it seems that Quebec is up in arms against Trudeau’s illegal acts and is all set to scrap his mal intentions of providing all the illegal aliens with a safe haven in the province.

The federal government of Canada might not have funds to cater to the healthcare crisis in the country, but for illegal activities, they certainly have enough. The PM of the Great White North never shies away from taking the most illegal steps in the world. Apart from making Canadian farms barren and demolishing Canada’s healthcare and aviation industries, Mr. Trudeau has been dedicating hefty amounts to accommodating illegal immigrants in the fabric of Canada.

A report by CTV news indicates some shady activities taking place under the nose of the Liberals in Canada. The Federal government has been dedicating public funds to building facilities near Roxham Road.

Now, the Bloc Quebecois wants to start an investigation into how public money was used to construct facilities close to Roxham Road. Others standing in unison are the Conservative and NDP MPs.

Many migrants use this border crossing in the Montérégie region of Quebec, south of Montreal, to enter Canada illegitimately and apply for asylum.

Recently, Radio Canada reported that Ottawa had sent more than $500,000,000 in public cash to cover Quebec expenses or pay suppliers.

These funds were used to rent land, pay for lodging, and set up trailers.

The public broadcaster observed that due to the government’s use of confidentiality clauses as a cover, it has been hard to determine the total amount of all the contracts Ottawa has given.

In a letter addressed to Pat Kelly, chair of the parliamentary access to information committee, the request for the emergency meeting was made. The letter stated that “we are concerned about the impact these revelations may have on the public and the trust the public is required to place in the government.”

The MPs are now requesting the Access to Information Committee to look into the matter and conduct a study into Roxham Road expenses. Moreover, they are also pushing to call several witnesses, such as Immigration and Public Safety Ministers Sean Fraser and Marco Mendicino.

Apart from that, the Bloc and New Democrats have long called for the suspension of the Safe Third Country Agreement, which is at the heart of irregular crossings through Roxham Road.

Due to the need for a potential refugee to file a refugee claim in the first “safe haven” they entered, this agreement ensures that anyone who attempts to enter the United States legally through a Canadian border crossing will be turned away.

As a result, some individuals who still wish to apply for asylum in Canada do so at improvised crossing points, such as Roxham Road in Quebec. Their applications for asylum can be processed once they arrive in Canada.

Also Read: 3 provinces unite against Trudeau and hound him for harassing Truckers at US border

It has been a long time now. The people of Canada want an answer to where the public funds are being reimbursed. But, as usual, the Liberals are tight-lipped and instead are opposing the investigations, with Liberal MP Greg Fergus saying “there’s nothing there.

“Hopefully the evidence we’ll hear will prove there is nothing there and that things are being done properly so we can move on to something else,” said Fergus.

Liberals on the committee also pushed for an amendment reducing the number of meetings on the investigation from six to two but were defeated 6–5 in the vote.

We all know this is not the first example of such a case since 2015 of shady activities. Undoubtedly, the Liberal party is digging its own political grave.