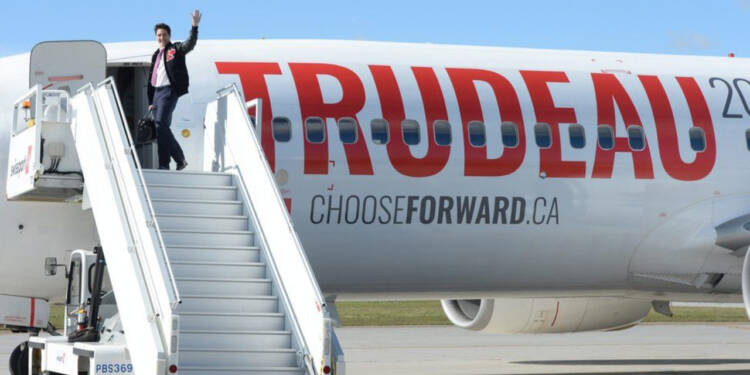 A few months back Trudeau wanted to add a layer of secrecy to his air travel. When most of the world leaders are freely visible on flight trackers, the Prime Minister of Canada chose to go under the radar. He ghosted his flights from flight-tracking websites but the move saw an obvious backlash.

A few months back, Canada’s military was exploring ways to add secrecy to Justin Trudeau’s air travels. It sought ways to prevent real-time tracking of the plane carrying the Prime Minister of Canada.

But now, Ottawa has changed its tune and asked U.S. aviation authorities to lift the blockings, less than three months after making the request to remove certain Royal Canadian Air Force flights, including the prime minister’s aircraft, off its online flight tracker list. Ottawa faced a serious backlash from blocking Trudeau’s movement in the air, so here comes a catch. Ottawa has now reversed the order.

According to the Ottawa Citizen, aviation commentator Jack Sweeney made the request from NAV Canada public on Tuesday night when he shared an excerpt from a Federal Aviation Administration ( FAA) bulletin seeking the removal of a number of RCAF callsigns from their Limiting Aircraft Data Displayed (LADD) flight privacy program.

Those callsigns include CANFORCE ONE, used by any Canadian military aircraft transporting the prime minister.

The ANS (Air Navigation Services) data feeds, which are used by many well-known online flight tracking services like Radarbox and FlightRadar24, are made available to the public. However, aircraft owners can choose not to have their flight data distributed through these feeds through the LADD programme.

Read More: Canada has an airport problem—But Trudeau is flying to costa Rica for vacation

You see, the original memo of July 14 requested a large swath of RCAF callsigns to be blocked- including HUNTER, MOLSON, ODIN, PATHFINDER, SONIC, VIMY, and BUBBLY—used by RCAF squadrons.

In the month of July, Daniel Le Bouthillier, head of media relations for the Department of National Defence, said the air force is working with NAV Canada, Transport Canada and other partners to examine options for increasing security on certain military flights.

This includes potential measures to limit the visibility of RCAF aircraft on publicly accessible aircraft tracking platforms” in some cases, he said.

Mr. Le Bouthillier said the cases where the military may want additional security safeguards to include “flights to protect North American airspace through NORAD operations or sensitive transport flights.”

The matter came to light after the Federal Aviation Administration, which regulates civil aviation in the United States, discussed a Canadian request to block call signs in a July 14 e-mail to aviation stakeholders with an interest in the agency’s Limiting Aircraft Data Displayed (LADD) program. This program allows aircraft owners to block or limit the dissemination of flight data.

But, what is bound to draw a question is why Canada chose to go under the radar in the first place? When travelling on official business, the majority of other international leaders—many of whom don’t have the same restrictions on commercial aviation as Canada—are openly visible on flight monitors. But, why did Canada want to hide its PM’s movement?

While “operational security” was given as the justification for blocking the aircraft, the action occurred soon after the National Post and other media sources exposed some embarrassing travel habits of senior Canadian officials.

In April, the National Post reported that the PM had flown nearly 128,000 km over the previous 10 months—with a little under half taking place in the seven weeks prior to the story’s publication date.

It was also revealed earlier this year that Governor General Mary Simon and her entourage spent about $100,000 on on-board cuisine while travelling to Expo 2020 in Dubai in March.

Even September was a busy month for the Canadian Prime Minister. He spent all but 10 days of the month travelling- a nearly week-long stopover in Vancouver for announcements and photo-ops, following the funeral for the late Queen, the UN General Assembly was held in New York City, and several days were spent assessing hurricane damage in the Maritimes. He even cancelled a trip to Japan to attend the funeral of former Japanese PM Shinzo Abe.

Now, all data and figures aside, we understand that travelling is not an offence, especially when you are the prime minister of a country as big as Canada. But anyone can smell a fishy here once the details are perused. As per the Province.com website, the PM’s public itinerary shows most stops two months ago were photo opportunities, site tours, or chats with local residents.

Clearly, Trudeau wants a different set of rules for himself. When other world leaders are openly visible, he wants to remain hidden. While his officials cited ‘operational security’ for implementing the measures, they proved to be ineffective. Trudeau wanted to feel the world by travelling and enjoying the needed vacations, but in silence!

The Russian people are crazily lining up for military recruitment, and Western media is already rattled