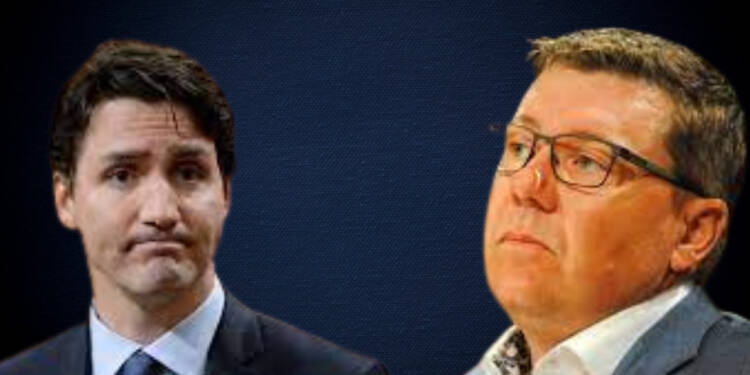 The prairie provinces in Canada have always stood in unison to show their discontent with the Trudeau government. While the populace of Alberta is cheering the victory of the new premier, its effects are also being seen in Saskatchewan.

We at TFI recently reported how in Alberta, Danielle Smith is witnessing a collective welcome. The free Alberta crusader is all set to free the province from the shackles of Trudeau’s dictatorship in the region. And so is Saskatchewan premier, Scott Moe.

Next week, Scott Moe, the premier of Saskatchewan, will present a policy paper on how federal policies affect the province and how to “guard” against “federal encroachment” into provincial affairs.

“Premier Moe will be releasing a policy paper next Tuesday which will outline the harmful economic impact of various federal policies on Saskatchewan, as well as options for the next steps to protect Saskatchewan people, jobs and businesses from this federal intrusion into areas of exclusive provincial jurisdiction under the Constitution,” said Moe’s press secretary Julie Leggott on Friday.

“Legislation to clarify and defend Saskatchewan’s constitutional authority is one such option.”

Following Danielle Smith’s election as leader of the United Conservative Party and Alberta’s designated premier, Moe will make his statement.

In her campaign, Smith advocated for an Alberta Sovereignty Act, which, according to Smith, would permit the Alberta legislature to disobey court decisions finding that the province has violated the Canadian Constitution by refusing to enforce federal law.

Regarding Smith’s proposed Act, Leggott said, “Premier Moe appreciates and understands the reasons why that legislation is pursued.”

After the victory of Danielle Smith, Scott Moe and Smith are now working in unison and focusing on Ottawa.

During her victory speech Thursday night, Smith sent a warning to the federal government.

“No longer will Alberta ask permission from Ottawa to be prosperous and free. We will not have our voices silenced or censored,” Smith said.

A similar thing was witnessed after Scott Moe took up the baton winning the Saskatchewan party leadership in 2018. He featured a promise to fight the Liberal government’s carbon tax.

“Saskatchewan will always look for ways to work with other provinces when interests and priorities align. No consideration has been given to any potential lawsuits that Alberta may pursue in the future.”

In the past few months, Saskatchewan has voiced discontent with the federal government’s jurisdiction on a series of matters including immigration, water testing and a firearms buyback. Saskatchewan’s premier Scott Moe even co-signed a letter to PM Justin Trudeau and U.S president Joe Biden to call for land border crossings to return to pre-pandemic levels.

The provinces of Canada are now fed up with Trudeau’s dictatorship and unnecessary meddling in their affairs. Now, they want to get rid of that intrusion. They want their provinces to have their own identity within the country of Canada which under Trudeau seems like a cold day in July. After Alberta, Saskatchewan seems to follow suit of getting away with Trudeau’s woke agenda. The prairies are all set to ‘Kick Trudeau out.’