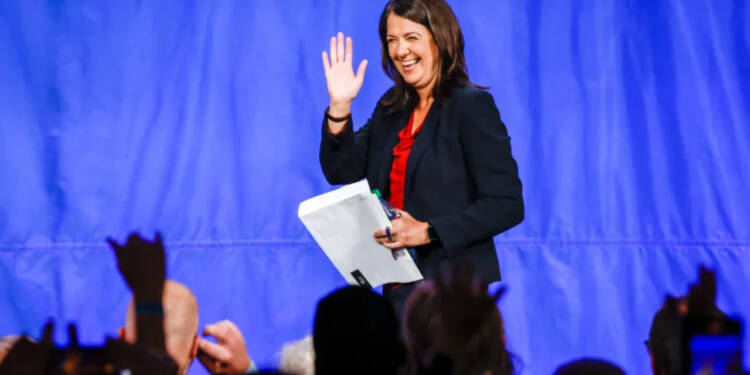 The province of Alberta has had enough of heavy-handed leftist idealism now. Albertans wanted to see a change and they have now heaved a collective sigh of relief upon the news that Danielle Smith has won the UCP leadership race.

Danielle Smith now holds the fort as the 19th premier of Alberta, replacing Jason Kenny. On the sixth ballot, Danielle Smith won the leadership of the United Conservative Party by riding a populist wave in Alberta.

She will be a fresh and possibly disruptive force in Canadian politics when she takes office as premier. She has always campaigned on an “Alberta First” slogan with a promise to introduce the Alberta Sovereignty Act.

“No longer will Alberta ask permission from Ottawa to be prosperous and free,” Smith said in her acceptance speech Thursday night.

Read More: The lieutenant-governor of Alberta is playing a dangerous game that can lead to a civil war

Clearly, under the leadership of Danielle, Alberta is bound to change in leaps and bounds. The province is now seeing a Samaritan in the new premier, who is all set to free it from any kind of woke agenda.

She claimed to be an outsider, stood with the demonstrators who were upset about the COVID-19 limits and vaccination requirements, and made a commitment to put Alberta first while fighting Ottawa with her act of sovereignty.

Before running in the race to become the next premier of the province, Danielle assured the province she would also welcome an Alberta Sovereignty Act, or “contentious law’.

The law saw controversies and even became a bone of contention between Smith and the Lieutenant Governor of the province by hook or by crook. The act affirms Alberta’s right to refuse and reject federal government actions or laws that intrude into provincial areas of jurisdiction or attack the interests of Alberta.

Danielle Smith was in a bid to propose the Alberta sovereignty act with a view to handing the Albertans back their constitutional rights that the lawless federal government continues to invade for a long. Its sole purpose is to bring lawfulness to an often lawless and misguided federal government.

An act limiting Trudeau’s control over the province. Now, how will Mr. Trudeau intrude into the province’s politics or will it have jurisdiction? Although the act received flak from Trudeau’s lackeys, now with Smith in power, Alberta will see a change. A change that Albertans have wanted to see for a long time.

But, Danielle’s victory is becoming a pain in the neck for the opposition parties in the province. Soon after Smith won the leadership last night in a narrow six-ballot win, Alberta’s Opposition leader says the province is due for more chaos, costs, and conflict after Danielle Smith’s victory last night in the United Conservative Party leadership race. The NDP’s Rachel Notley says the party will continue to be consumed with its internal bickering instead of bread-and-butter issues like the cost of living.

She reprimanded Smith for being reluctant to run in a Calgary constituency that was already open and urged her to organise a by-election as quickly as possible.

Danielle Smith’s coming to power must have sent shockwaves in Ottawa, but now it’s high time. For too long, Alberta has been passively allowing the federal government to intrude into the areas granted to them under the Constitution.

The new premier is resolute enough to enact the law and vex the nerves of the liberals in town. After all, they have had enough of Prime Minister Justin Trudeau. Under him, Ottawa has been sabotaging Alberta’s economy, damaging its growth and holding it back.