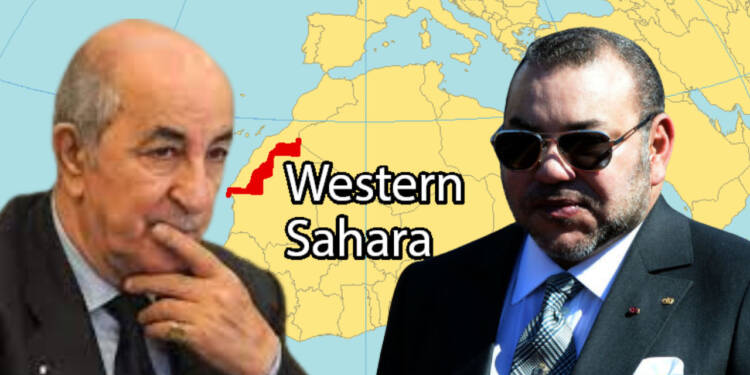 Located on the northwest coast of Africa and bordering Morocco, Algeria and Mauritania- Western Sahara – with just 500,000 people – has been the subject of a 47-year territorial dispute between the Polisario Front and Morocco.

From Algeria, the exiled Polisario Front declared the independence of the Sahrawi Arab Democratic Republic within the 252,000 square kilometres of Western Saharan territory in 1976. Their ensuing war with Morocco was interrupted in 1991 when Rabat agreed to a cease-fire brokered by the United Nations. Tensions, however, have remained as the parties never agreed on a political solution.

Algeria has always defended the independence of Western Sahara and provides the Polisario Front with funding, an operational base and diplomatic support. It opposes what it considers to be Morocco’s annexation. The land border between Morocco and Algeria has been closed since 1994.

The growing stature of Morocco:

Algeria, Mauritania, and Morocco are not the only rivals in the region involved in the fight. Other regional and global powers are paying careful attention to the conflict.

In exchange for a peace agreement between Morocco and Israel, the US under the Trump administration recognised Moroccan sovereignty over Western Sahara. However, since taking office, Biden has made unofficial attempts to change Trump’s course of action. He encouraged Algeria and its militias in the disputed area by sending out subdued signals. In essence, Biden’s strategy is to marginalise and exclude Morocco while elevating Algeria. However, in recent years, a growing number of countries have begun to endorse Morocco’s claim to the area. In accordance with the normalisation deal between the two nations signed during the Trump administration, Israel has continued to deepen its ties with Morocco. In a rare display of unanimity, all of the Gulf governments voiced their solidarity with and support for Morocco’s stance. Recently, Spain endorsed  Morocco’s plan for governing Western Sahara.

The importance of the Sahrawi Republic:

Due to its proximity to the Strait of Gibraltar, the Sahrawi Arab Democratic Republic is an area that the West views as being of great strategic importance. The region is seen as a bridge between Africa and Europe, connecting the shores of both regions through the Strait of Gibraltar, thereby expanding and developing trade relations more effectively.

Furthermore, the importance of the Strait of Gibraltar cannot be undermined. At its narrowest point, it connects the Atlantic Ocean and the Mediterranean Sea as well as the continents of Europe and Africa, which are separated by 14.4 kilometres. Due to its geographical location, it is now regarded as a key intercontinental enclave, a necessary route when travelling from north to south to access the coasts, and an essential route for maritime trade when travelling from east to west

The Western Sahara region also has vast natural resource wealth, including phosphate and shale gas. Since phosphates are a key, and finite, ingredient for synthetic fertilizer, they are a core resource in global food production. The region is also believed to have significant offshore oil and gas reserves, which could come in handy for gas-starved western nations.

In response to Security Council proposals for a “definitive political settlement,” Morocco submitted a plan to the UN in April 2007, agreeing to grant limited self-government in the region.

Some administrative, legislative, and judicial functions would be entrusted to inhabitants, who would “manage their affairs democratically.” In the Moroccon scheme, the “Sahara independent Region” would have its own administration and parliament comprised of tribal representatives and directly elected members. It would have its own courts that would rule “in the name of the sovereign.”

Truth be told this was quite a pragmatic life-saving solution proposed by the Moroccan authorities. Morocco, after all, owns 80 per cent of the enormous desert territory, which is rich in phosphates and has a long Atlantic coast bordering good fishing seas. Furthermore, in conventional warfare, the Polisario has little chance against Morocco. Even important players such as Spain, Israel, Russia, and, most recently, Kenya recognized Morocco’s approach as the only realistic solution to the situation.

Even the Saharawi Organization for Peace (MSP), a political movement that advocates for a peaceful political solution to the Sahara issue, supported Morocco’s Autonomy Plan in its New Manifesto. The MSP enjoys widespread popularity among the Sahrawi people. As a byproduct, the recent support for Morocco by the MSP reflects the changing nature of the conflict wherein commoners in Sahrawi are,albeit gradually, siding with Rabat.

The last nail in the coffin:

Recently, several elected Moroccan Sahrawis, representatives of NGOs and diplomats have voiced strong support for the autonomy plan offered for the Sahara under Morocco’s sovereignty and hailed the democracy and inclusive development achieved in the Sahara.

During the debate of the UN Fourth Committee, the speakers also exposed the serious human rights abuses committed by the Polisario militia in Tindouf camps, Southern Algeria, against children and women, deploring the deteriorating living conditions in these camps

Against this environment, the only logical course of action for Algeria would be to endorse Morocco’s plan. The North African country’s standing in the area is only bolstering, courtesy of the substantial solidarity that Morocco has been able to garner. Picking a confrontation with Rabat may spell catastrophe for Algiers.