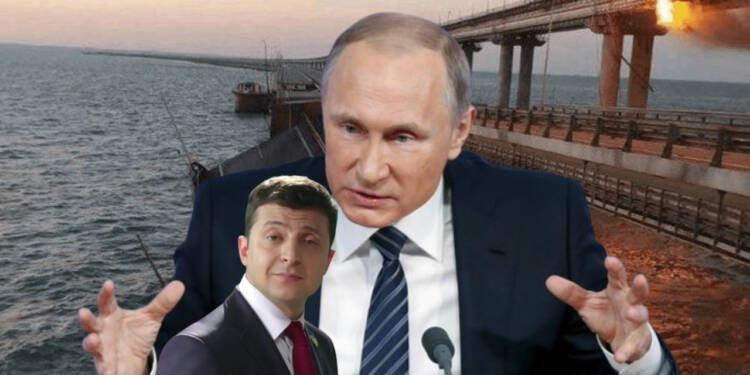 Ukrainians rejoiced after images of massive fire from Kerch Strait Bridge that connects Russia and Crimea emerged. In the images, many railway carriages were completely consumed in flames and two spans of the road bridge were submerged in water. Some on social media were found saying, “Birthday gift for Putin”, as the Russian President celebrates his 70th birthday.

Alas, the happiness didn’t last long! According to reports, traffic on the Kerch Strait bridge, a crucial strategic route for Russian soldiers in Crimea during their conflict with Ukraine, has been stopped as intense flames and black smoke are spewing from a train carrying an unidentified cargo. Photos further reveal that near the on-fire train, spans of both the eastbound and westbound lanes had fallen into the river.

Somethings burning on the #Kerch Bridge, 🇷🇺 sources say a fuel train has set ablaze, I wonder how that has happened?! pic.twitter.com/iAYmQLmHYE

Ukrainian President Zelensky and his government have vowed to get Crimea back many times in the past. In August, Zelensky said that the war in Ukraine began with Crimea and must end with its liberation. He had said, “We will take back Crimea- it is our territory. We will do this in any way which we decide. Ukraine is strong enough and powerful enough to see a perspective for Ukrainian Crimea. We will bring freedom to Ukrainian citizens in Crimea.”

The bridge was one of Ukraine’s top targets and it cost billions to construct after Russia annexed Crimea in 2014. Even the Pentagon has openly said that it believes Ukrainian forces may have successfully attacked the bridge. In an effort to defend itself against an assault in recent months, Russia has set up air defences and decoy barges.

As the reports come, Ukraine did a cowardly terrorist attack with the help of a truck bomb on the bridge as it lacked conventional weapons that could be used to attack it from a great distance. The Crimean Bridge bombing was celebrated all day long on Twitter by the Ukrainian administration. Its intelligence agencies and media openly exulted over the operation. The level of happiness in Ukraine is such that, the country’s post office unveiled a commemorative stamp on the attack.

Adviser to the Head of the Office of President of Ukraine Volodymyr Zelensky tweeted, “Crimea, the bridge, the beginning. Everything illegal must be destroyed, everything stolen must be returned to Ukraine, everything occupied by Russia must be expelled.”

Crimea, the bridge, the beginning. Everything illegal must be destroyed, everything stolen must be returned to Ukraine, everything occupied by Russia must be expelled. pic.twitter.com/yUiSwOLlDP

However, the mood on Ukrainian Twitter changed in the evening realising the grave and dangerous mistake that they did and now which could spell doom for them. After all the gloating, Ukraine started to shift its narrative on the incident to “Russian false flag.” Russia bombing its own bridge, funny right?

Now seriously. FSB/PMC try to eliminate leadership of Defense Ministry/GHQ. Before personnel change, FSB is in knockdown — missed Putin's bridge explosion. Defense Ministry can now blame FSB for the future South loss. Isn’t it obvious who made an explosion? Truck arrived from RF.

This is not the first time that Ukraine and the West have blamed Russia for the “false flag operation.” Just a few days ago, West blamed Russia of causing leakage to its own Nord Stream pipelines which it constructed for Europe.

Ukraine this time has realised that the Kerch Strait bridge is also a symbol of Russia’s and Putin’s power. It was a huge source of pride and cost billions to construct. The attack on it was a very significant change in whole war optics.

Also Read: Ukraine should have timely accepted the peace proposal, now it stands to lose most of its territories

However, despite the Ukrainians’ perception that the war is starting to go in their favour, Moscow doesn’t appear to be ready to give up on its plan to subdue Ukraine, particularly when it comes to the sensitive issue of Crimea. Only a few weeks ago, Dmitry Medvedev, the current deputy national security advisor and former Russian president, threatened to bring about “judgement day” if Ukraine ever attacked Crimea.

Geopolitical experts say that it’s pure fantasy of Ukraine to dream that they can push Russians out of Crimea. And, by provoking Russia on a sensitive subject like Crimea, it has put its hands in beehive. Russia has no dearth of missile or striking capabilities and one never knows how Ukraine would be hit by them. Zelensky and his administration should realise that provoking Russia is surely not the right way to go ahead. Zelensky must be reminded of writer H.G. Wells’ historical lines, “If we don’t end the war, the war will end us.”