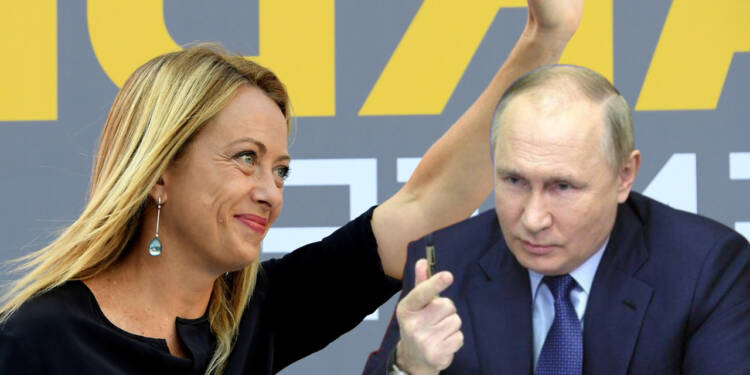 Italy gas crisis: Rome’s economic crises have gotten out of control due to the prolonged energy crisis. However, September 25th was a red letter day in Italy. Italians who had given up on Italy because of the persistent energy and gas crisis found a new optimism in Giorgia Meloni’s Brother of Italy. Mario Draghi and the left parties, which alone ruined the Italian economy over the past twelve years, were clearly shown exit doors.

Now, as Draghi is packing up his bags, Russia has offered a fresh hand of friendship to Italy. And slowly but steadily, the Italy is emerging from its energy and gas crisis. A camaraderie is slowly developing between Russia and Italy. After a tussle over gas supplies over the past six months, Gazprom has officially started resuming gas supplies to Italy. According to media reports, Russia will resume gas deliveries to Italy via the TAG pipeline after suspending them last month due to transportation issues in Austria.

In its official statement after the resumption of gas supplies from Russia, the Russian energy giant Gazprom said: “Transportation of Russian gas through the territory of Austria is resuming, as a “solution” was found with Italian buyers following regulatory changes in Austria.” The Italian energy distributors have welcomed Russia’s move to resume gas supplies. Reportedly, the Italian energy company Eni welcomed the move and announced, “gas supplies from Gazprom resumes today i.e. 5th October.”

Moreover, Eni has also agreed to a unilateral demand from Gazprom in the summer to amend its long-term contract with the Russian gas producer and to open a special Gazprombank account in Moscow to handle payments, their conversion into rubles and payment for Gazprom’s gas deliveries. For those who don’t know, most Russian gas delivered to Italy passes via Ukraine through the Trans Austria Gas Pipeline (TAG), to Tarvisio in northern Italy on the border with Austria.

Italian gas supplies were in the doldrums over the past few months. On 17th June, Italy reported for the first time that Italian energy giant Eni is going to receive only half of the proposed 63 million cubic meters of gas per day. After the Nord Stream 1 pipeline was shut down, by the end of August, the amount of gas transported from Russia to Italy had decreased by 26%. Every time Russia reduced gas supplies, it cited “technical justifications” to support the gas cuts. But, the European Leaders including Draghi never accepted these justifications. Outgoing Mario Draghi had previously said Russia’s reasons for cutting gas deliveries are straight “lies”.

Through the gas cuts, Russia fanned the flames that were brewing in Italy as a result of the crumbling economy. The Italian voters, however, had enough of the Left. Rome shifted to the right on September 25. Yes, Italy is now a conservative nation. The rightwing coalition led by Giorgi Meloni’s Brothers of Italy party won a clear majority and is poised to form the next government.

The already disastrous economy of Rome was not helped by the earlier gas shortages. Italy is the second-largest consumer of Russian gas in Europe after Germany. According to IEA data, Italy imported 29.2 bcm of gas from Russia. In addition, the Italian conservatives have been known for being kind and profound towards Russia. In her speeches, Meloni has frequently argued that for her, the concerns of the Italian people would always come first. There are heavy discussions in Brussels that Meloni would go the ‘Orban way’ which means, she would adhere to a smart balance between Russia and the EU.

Before the war in Ukraine, Italy imported 95 percent of its gas consumption, about 45% of which came from Russia. The restart of gas shipments would be a new signal for Italy. However, after the election episode, it’s possible that Russia is looking to improve relations with Italy. Till now, Meloni has kept silence on Russia. But, Brussels knows that this silence could turn out to be an approval to rekindle its ties with Moscow. A revamped friendship is now clearly in sight.

Kosovo and Serbia could become a single country but, the West doesn’t want to give up its goldmine