Saskatchewan is going to sue Trudeau’s posterior off 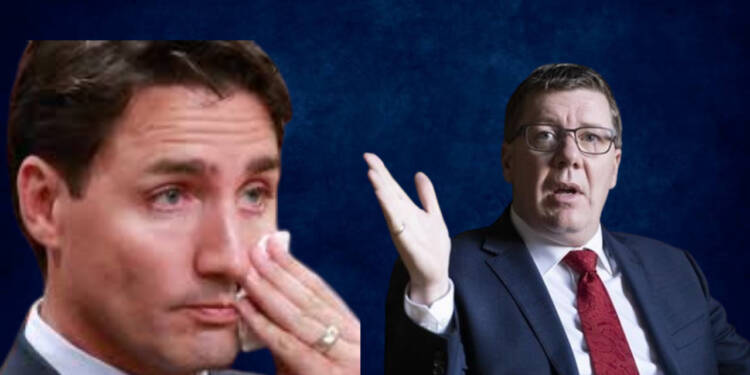 Trudeau’s irrational climate diktats could have led Saskatchewan to lose $111 billion. A hefty amount of Canadian dollars indeed. But, worry not, the saviour in Scott Moe won’t let the province suffer at Trudeau’s hands.

When it comes to climate change, the Canadian prime minister loses it. He frequently makes illogical conclusions regarding this matter and attempts to impose his decisions on the Canadian provincial governments.

Scott Moe has stated that he is ready to file a lawsuit to challenge federal pollution standards. According to him, Canadian environmental policies are hurting his province’s economy and making life difficult for farmers, resource workers, and other people.

According to Moe, the province is making an effort to keep control over its natural resources, which includes limiting emissions from the extraction of oil and gas and fertiliser.

Moe released the paper, titled Drawing the Line: Defending Saskatchewan’s Economic Autonomy, during an event hosted by the Battlefords and District Chamber of Commerce on Tuesday afternoon.

The paper highlights the government’s plan to flex its own autonomy, starting with a bill to be introduced this fall to address federalism.

Moe said, “We respect the Constitution we have in this nation. But [the bill] will most certainly reassert the provincial jurisdiction that we have and ultimately provide us with that opportunity and certainty to move forward and expand some of the most sustainably producing industries on Earth. ”

Now, this bill is bound to draw support from the prairies and even the Atlantic provinces, which have already expressed discontent with Trudeau’s climate diktats. Scott Moe has also expressed an opportunity of collaboration with Alberta’s premier on the bill, as Premier Danielle Smith has promised to table a sovereignty act this fall to assert Alberta’s constitutional rights.

Scott Moe believes all the steps he is taking are in the direct interest of the province and its people. Moe is wise enough to realise the real potential of the prairie province of Saskatchewan and free it from the clutches of the Trudeau government.

He stated, “All of the moves we are taking from here … are about Saskatchewan. And they’re about the opportunity we have in this province to grow and prosper, to attract investment and to ultimately reinvest back into our communities.”

Saskatchewan has already contested the constitutionality of the federal government’s carbon tax, but it was unsuccessful because the Supreme Court determined Ottawa was acting within its legal authority.

Clearly, Saskatchewan is all set to challenge Trudeau’s government and is expected to join other Prairies and Atlantic provinces as well.

We have been seeing for a long time now, how the Canadian federal government tries to lecture the world, but it also wants to police its own provincial governments. Almost a year ago, the four Atlantic provinces of Canada were asked to submit a strategy to curb climate change by Trudeau’s government. But the provinces could not achieve this goal by the designated deadline. Therefore, lately, on behalf of the four provincial premiers, Nova Scotia Premier Tim Houston wrote a letter to the federal government.

In the letter, the premiers of Atlantic Canada asked the federal environment minister, Steven Guilbeault, to extend the deadline for submitting their plans to reduce carbon emissions, but the plea was categorically turned down by the federal authorities.

Already, Canada is undergoing an economic crisis again, thanks to Trudeau’s unwise policy decisions. The provinces cannot, in the midst of this, put their plans for economic growth on hold in favour of carrying out federal directives. Saskatchewan has outrightly proven this.

So, EU has officially recognized ‘Tigray’ region as a part of Ethiopia