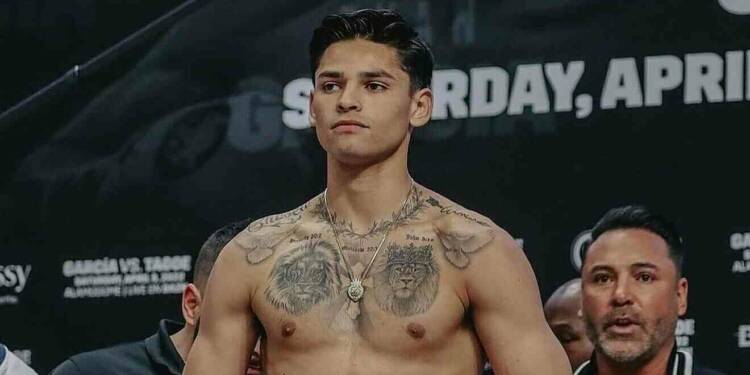 Ryan Garcia is an American professional boxer who held the WBC interim lightweight title in 2021. He was born on August 8, 1998. In this article we are going to talk about the biography, career, notable works, and family of Ryan Garcia so read the article till the end.

As of May 2022, he is ranked as the world’s sixth-best active lightweight by The Ring magazine, the Transnational Boxing Rankings Board, and ESPN, and tenth by BoxRec.

Ryan Garcia is a famous boxer and he played so many games for his country, this biography article is incomplete without talking about his journey and games. So here you will gain info about his career and games.

Oscar De La Hoya announced Garcia would make his debut on December 17, 2016 on the Smith-Hopkins light-heavyweight main event at The Forum. Garcia won the fight by knockout in the second round.

In September 2019, Ryan Garcia extended his contract with a new five-year deal with Golden Boy Promotions. Specific details of the multi-year deal were not disclosed.

On October 8, it was announced Garcia would be facing Olympic gold medalist Luke Campbell for the interim WBC lightweight title at Fantasy Springs Resort in Indio, California. The fight was originally scheduled for December 5, 2020, but was pushed back to January 2, 2021 due to Campbell contracting Covid-19.

The venue was also changed to the American Airlines Center in Dallas, Texas. In round 2 of his fight with Campbell, Garcia was knocked down for the first time in his professional career. He had survived the knockdown, as he got up shortly after hitting the canvas.

Later on in the fight, in round 7, Garcia hit Luke Campbell with a fight-ending body shot. CompuBox statistics show Garcia outlanded Campbell 94 to 74 (32%) in total punches, and 77 to 51 (44%) in power punches, with Campbell outlanding Garcia in jabs 23 to 17 (15%). The fight was ultimately Campbell’s last bout before his retirement.

Ryan Garcia comes from a large family. His parents were actively involved in his amateur career. They continue to assist him with his professional career as his father remains one of his trainers and his mother works as his Personal Administrative Assistant for commercial projects. In March 2019, Garcia’s daughter was born.

Although being American by birth and nationality, Garcia often incorporates his Mexican heritage into his persona. He often carries both the U.S. and Mexican flags into the ring and frequently wears red, white, and blue colors.

Ryan Garcia was trained by Eddy Reynoso, who also trains Canelo Álvarez and Óscar Valdez at their gym in San Diego, California, from October 2018 to February 2022. He is now currently trained by Joe Goosen.

Garcia turned professional at age 17 on June 9, 2016. In his first professional bout, he fought against Edgar Meza in Tijuana, winning the match by TKO. Garcia soon signed with Golden Boy Promotions in November 2016.

On February 4, 2022, it was announced that Garcia would be returning to the ring after a long spell of inactivity against former IBO lightweight champion Emmanuel Tagoe on April 9. He easily dominated Tagoe and scored a knockdown in Round 2, winning a unanimous decision with the scores of 119-108, 119-108 and 118-109.

We hope this biography article of Ryan Garcia will be helpful for you to understand his journey and works.

Fixed Deposit vs Savings Account: Where should one choose to invest