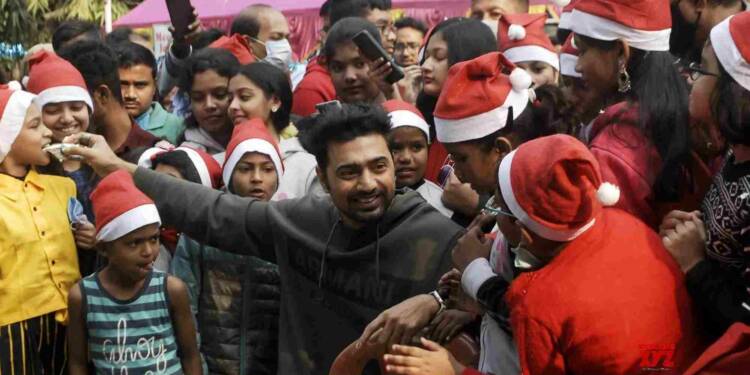 Deepak Adhikari known by his stage name Dev, is an Indian actor, producer, singer and film writer, known for his works in Tollywood, and more recently, a politician. He was born on 25 December 1982. He owns the production house Dev Entertainment Ventures Pvt. Ltd. In this article we are going to talk about the biography, career, notable works, films and family of Actor Deepak Adhikari so read the article till the end.

Deepak Adhikari was born on 25 December 1982, in Mahisha, a small village near Keshpur, to Gurudas Adhikari and Mousumi Adhikari. His father used to have a food-catering service and his mother is a housewife. His nickname is Raju.

Deepak Adhikari also did an acting course at the Kishore Namit Kapoor Acting Academy.[1] In an interview with The Times of India, Dev recalled that when his school was closed for summer, he went to the outdoors of Prahaar: The Final Attack with his father, where Nana Patekar was shooting.

He described it as more of a family vacation for them and work didn’t feel like work. As a child, that was the first time he got a taste of cinema. Though that was his first, life continued to be the same for the next couple of years. The family was based in Mumbai and Dev would often accompany his father to the sets of Abbas-Mustan and Prakash Jha, among several others.

There were times when his father would keep busy with other things and he had to chip in. Though he couldn’t cook, he would do the groceries and supervise on his father’s behalf.

Deepak Adhikari also said there were times when he washed plates and served food. After receiving his diploma from Bharatiya Vidyapeeth University, in Pune, in Computer Engineering, Dev returned to Mumbai and started his film career as an observer on the set of Abbas-Mustan’s Taarzan: The Wonder Car. Dev is in a relationship with fellow actress Rukmini Maitra.

Dev made his acting debut with the 2005 film Agnishapath, directed by Prabir Nandi, opposite Rachana Banerjee. The film did not perform well at the box office. By this point, the film I Love You, directed by Ravi Kinnagi, was in development at Shree Venkatesh Films.

Dev met with the producers and gained the male lead role. Despite the financial success of I Love You, Dev did not take on any other roles for about 14 months. He went to Mumbai, and, dedicated to improving himself, learned dance and trained under fight choreographer Aejaz Gulab (of Shootout at Lokhandwala and Mission Istaanbul fame).

He made a comeback on the silver screen with Premer Kahini, opposite Koel Mullick, his first with whom he went on to star with in numerous films. A remake of the Kannada hit Mungaru Male, the film was moderately successful. Dev got another breakthrough in Challenge which opened to critical and commercial success.

He received the Anandalok Awards for Best Actor and Best Action Hero for his performance in the film. He continued to garner commercial success and wider attention through his successful films, including Le Chakka, Dui Prithibi, Paglu, Challenge 2, Khoka 420, Rangbaaz and Chander Pahar.

His accomplishments have made him one of the highest paid and sought out actors of Bengali cinema. Though he has delivered some critically acclaimed performances, Dev is often trolled for his poor accent, average acting skills, his winning of the Mahanayak Samman from the Government of West Bengal.

Dev had also been a mentor on the Bengali dance reality show Dance Bangla Dance, replacing Mithun Chakraborty. He is also a Member of Parliament in the Lok Sabha representing Ghatal constituency since 2014, as a candidate from the party All India Trinamool Congress.

We hope this biography article of Deepak Adhikari will be helpful for you to understand his journey and works.

Africa’s skies are dominated by Western airlines, well not anymore