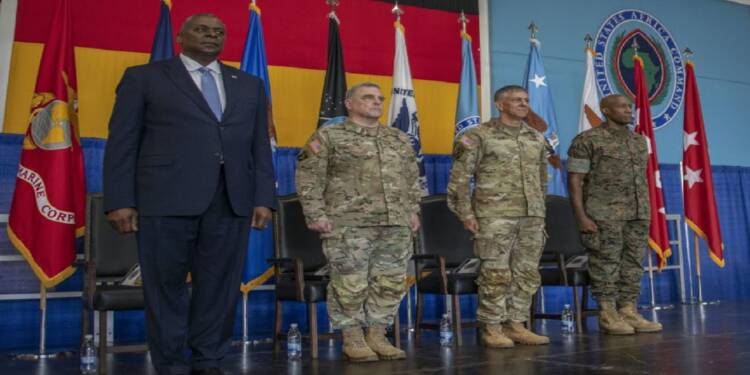 When you go to the AFRICOM’s website you’ll see terms like Civilian, Peace, Security, Women, and responsibility among other various terms. These terms indicate that US is a responsible power in the Continent of Africa. But the reality is just the opposite of these heavy terms. The AFRICOM was established only and only to command the African Continent as its ironical name suggests. The name was pinpointedly accurate whether it was done deliberately or mistakenly but it is pretty accurate. Talking about the URL of the website WWW.AFRICOM.MIL which is self-suggesting that it is a military centric operation masked as a humanitarian gesture by America towards Africa. But why are we talking about the Webpage of AFRICOM? Read on further to know.

‘We have a serious problem: America is addicted to oil, which is often imported from unstable parts of the world.’ These are the words of the ex-President George W. Bush, when he was addressing the nation in the year 2006. Indeed, US is addicted to oil but another thing it is addicted to is jealousy. It is jealous of the nations which prosper. Washington thinks that everything which is special, unique or precious is the sole property of the ‘people’ of America. In order to retain these resources, it uses multiple strategies and tactics to manipulate, influence, or command the various governments of the world.

America knocked Africa’s door in 2008. During the conflicts like US’ invasion of Iraq and Afghanistan and the 2008 economic recession, America was busy in creating a Pan African command which would replace its ongoing military and other operations across the continent of Africa. This suggests the seriousness America has towards the continent or to simply put its resources. But the question here is that what interests does America have in African Continent? What is America officially stating about its goals in Africa and what it is really doing till date?

So, an instance of the phrase ‘easier said than done’ can be seen during the disastrous “Black Hawk Down” incident in which 18 US troops were killed during a ‘humanitarian’ mission in Mogadishu. This irked the US Administration and compelled the policymakers to carve out a cautious approach towards the continent which is evident from the event of Rwandan genocide in 1994 which saw non-participation of US troops.

Although a watershed moment in the US policy came when it witnessed attacks of Al- Qaeda on 11 Sep 2001. As a result, the actions of the US Military became direct and sometimes pre-emptive under the Bush regime as America waged its ‘War on Terror’. After a few years of US’ ‘War on Terror’, the instability increased around the oil-belt of the world. This compelled the US to look for alternate sources of oil in other areas such as the continent of Africa.  The Sub-Saharan Africa contains roughly 7% of the world’s proven oil reserves.

The establishment of a dedicated command for Africa (AFRICOM) is an addition to its existing Central, Pacific, Northern, Southern and European Commands. Data suggests that after the deployment of AFRICOM, which was intended for the establishment of democracy, stability and good-governance in Africa, the continent further destabilized. This command is strategically deployed in Africa to churn out wealth from the continent. This led to the destabilization of the continent as the Command fuelled conflicts across the continent for achieving it objectives.

AFRICOM is the representation of the Bush’s failed foreign policy, due to which the world saw decades-long wars, be it Afghanistan or Iraq. The establishment of AFRICOM tells us the desperation of Pentagon and US, that they forged the making of a dedicated command while US was busy in two major wars and a major economic crisis after WW2.

AFRICOM, unlike other US military commands, includes a minor development component, with over thirty individuals from other US agencies, including the US Department of State (DOS) and the US Agency for International Development (USAID), as part of its organisation. Furthermore, at least one of its deputy commanders will be a senior State Department official. The declared rationale for this is to align AFRICOM’s operations with US development efforts. However, the DOS has openly criticised it for prioritising military activities, i.e. defence, over development and diplomacy, an inversion of the ‘Triple Ds’ doctrine.

Third-Parties- China- US’ own Frankenstein

US is known for creating counterbalances for achieving its short-term policy goals but it doesn’t take care of them after using the counterbalances. Due to this reason the counter-balances often go and unbalance America. We’re all aware of the Afghan-Mujahideen and creation of Bin-Laden and what transpired after that. But these are non-state actors. What I’m talking about here is the third-party states.

After the vassal state of America in Asia—Japan went haywire and started dis-aligning its policies with US. Japan’s economy witnessed stagnation and China on other hand saw a significant rise. It was ensured that China becomes a major power in Asia to counterbalance Russia and Japan. Still it was not sufficient as during 1999 when Europe introduced Euro in a bid to de-dollarize its economy, US was perturbed. Europe also declined the US’ charm offensive to invest in UST’s to keep the dollar afloat. Result was China’s arrival into WTO in revenge to Europe’s trade. China got an unprecedented strategic opportunity in the first two decades of 21st century.

In return China invested in UST’s and got more favors from the US such as Wall Street Investment, Export ready orders, Trade deals, and many intellectual property rights. Now did this ring any bells as to how a bamboo cutting China became the biggest export hub of the world including second largest economy and a tech hub in such a short period of time?

Also Read: Russia is building its own AFRICOM in Africa, and that’s terrible for US and China

But why did we discuss China in Detail?

Because this counterbalance is the biggest reason of creation of AFRICOM. No matter how much US declines this and puts forth the stated reasons of creation of the command but it is a reality that China has surpassed trade and debt relations than that of US. Countries hold more Chinese debt than that of US and same prospects are with trade too, China has surpassed in trade with many African countries. China is heavily investing the money earned from Wall Street investments. Let me give you an example of increasing Chinese influence in the African continent.

In 1990s at least 20 African Nations recognized Taiwan as a separate nation state whereas today this number is down to only four or lesser African countries. Why did this number go down? This is a result of increased Chinese partnership in the continent.

Neo-Scramble for Africa—Suspicions on US

This is an open secret that currently a neo-Scramble for Africa is in operation. The difference between the old and new is that in old times European Powers fought for it and now US, China, Russia, France are the major stakeholders in the continent.

But there are suspicions regarding the role of US in Africa as it has historically backed dictators, militias (sometimes brutal), and turned a blind eye on African Liberation Movements. Cunning US was successful in whitewashing the image of Africom and it is evident from the actions of South Africa. Even South Africa, the African country most opposed to the founding of AFRICOM, has succumbed to US’ Propaganda; it is presently involved in a national guard relationship with the New York Guard. In addition, AFRICOM navy ships have docked in a number of African ports. South Africa shines out once more. Its Simon’s Town harbour is often visited by naval warships from the command, notably destroyer frigates like the Arleigh Burke.

It is clear that if AFRICOM continues to operate freely in its current form, interstate violence in Africa might grow, alongwith Africa’s civil conflicts, which had lately been on the decline but are rising back again in a few pockets, as diverse ethnic groups and opposition forces gain weaponry to deal with the problems they confront. Political solutions will be less possible, and rebel groups such as Ethiopia’s will be more militarily empowered to crush human rights and pro-democracy initiatives. Africa’s resources (especially its oil) threaten inflaming more serious wars, as they did during the Cold War, when foreign countries contributed arms to factions and African governments’ sovereignty dwindled as these powers gained unrestricted access to the continent.