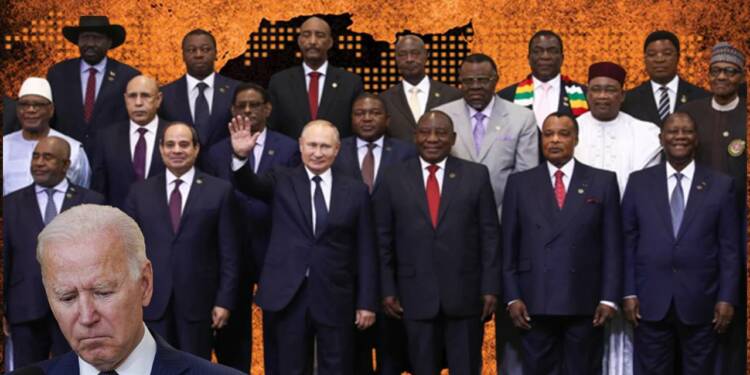 It is a matter of fact that Africa is growing cold towards the West and China. The West is known for first creating problems and then stepping in as a messiah to solve them. This phenomenon occurs when you have a full stomach and your kitchen cabinets are jam packed with food. As one doesn’t need to think about their own problems, they create problems to solve them. The West is experiencing the same phenomenon. For instance, the West supported the TPLF to control the Horn of Africa. It created problems in the Sahel region for controlling it through groups such as G5 Sahel. West grew hostile towards DRC when it thrashed the M23 rebels, an American proxy, ransacking the Eastern DRC. African countries have realized the evil policies of the USA which are devised to just loot the continent and were never meant for the betterment of Africa. The West has other multiple strategies which it uses to control Africa. The strategies include coercion through military power, bribing nations through aid, economic control through institutions like IMF, World Bank, sanctioning countries through FATF or directly, keeping them weak through arms embargoes, and controlling migration through Visa policies.

A god sent opportunity for the Russian military

The rising hate for the West and China is a Godsent opportunity for Russia as it is now wreaking havoc on the West’s influence in the African continent while establishing its military relations with different African countries. Citing a secret German Foreign Ministry report, Germany’s daily newspaper Bild.de reported that Russia is on its way to establish an US AFRICOM-type mission in Africa which will be capable of competing with the Western powers and bring stability in the region as well. Under this mission Russia is in talks with Egypt, Eritrea, the Central African Republic, Mozambique, Madagascar, and Sudan in order to establish military bases in these countries. The classified document termed “Russia’s new Africa Ambitions” states that Russia has completed military cooperation agreements with 21 African countries since 2015.

According to those agreements, Moscow has permission to establish military bases in the aforementioned 6 African countries. A military base in one of these countries is budding too. This military base is in Sudan which will be capable of hosting nuclear powered vessels when built. US on the other hand is in panic due to this situation, it even tried its military coercion and economic might to stop Sudan but in vain.

The Rise of PMC Wagner

The rise of Russia-backed mercenary group PMC Wagner/ BTG Wagner is the main cause of concern of the West. When the West was entangled in the Ukraine Conflict, this group quickly usurped the African Continent from the hold of the West. The West realized this when they went to Africa to buy oil and gas in Africa post Russia- Ukraine conflict. The West’s propaganda machine vilified Russia for the last 6-8 months accusing it of invading Ukraine. But in Africa the Wagner group was busy in taking the hold of the African continent. The point of deploying the Wager Group in Africa before formally deploying its military was due to perception. The West is very smart in creating perception through its media. Due to this reason Wagner was first deployed in the African Continent to lay the ground for Russia’s formal arrival. Russia is possibly the host country for Wagner which executes its strategies informally which the Russian forces cannot carry out officially.

African countries are laying the red carpet for Russia as a consequence of backstabbing by the West and neo-colonialism of China. For decades the West looted Africa, the Scramble for Africa is a living blot on the face of the West which resurfaces every now and then. The neo-Scramble for Africa is accomplished through deploying multiple strategies in the continent.

Use of such nefarious strategies west loots nations of oil, minerals, gold and many other natural resources.

Whereas, China on the other hand sticks to its old and gold strategies to debt trap nations through its shady loans and colonize them economically. But China uses different strategies from the West. On one hand China portrays itself as an alternative against the West. On the other hand it is known all over the world for trapping countries in its debt traps and then ravaging their mineral resources. In the name of development China provides loans worth billions of dollars to small countries and gets the work contracted to its own companies in the target country. It even exports raw material regarding the infrastructure contracts and even provides Chinese engineers and labor for the infrastructure projects. All in all it creates business for Chinese companies, increases Chinese raw material exports and also creates employment for the Chinese people through giving loans to a third country. And this doesn’t end here. The loans provided by China are very shady especially structured to debt trap the targeted country. This phenomenon has led to growing mistrust in Africans towards China.

In the backdrop of the growing resentment Russia stepped in with its pro-Africa policies and partnerships and obliterated the influence of the West. African countries embraced Russia as they needed a better partner in place of the West. Russia today is helping them stabilizing their territories, fighting with terrorism across the continent and is also providing economic assistance to different nations.

Sooner or later the Russian military will dominate the African continent not to suppress it but as a stabilizer force. It is apparent throughout the world that the Russian military is better than whole of the West when it comes to fighting with islamists and insurgents. The France-led G5 Sahel has failed in its objective of eliminating insurgents from the Sahel region ultimately leading Mali to exit the group. Mali then took help of Wagner group and is fighting insurgents and is slowly eradicating them from its territory.

In Africa the trend is that if one nation is successful in eradicating a problem with a particular process, other nations will follow suit. The same trend is occurring in Africa where the nations are following suit of Mali and are on the way to expel France and other western powers from their territories. The nations like Niger, Burkina Faso, Central African Republic, Sudan and many other are aggressively in talks with Russia to partner with it and are slowly turning anti-West. If this trend continues these nations will kick Western powers out and will welcome Russia as a reliable partner which it has proven to be.