France's President Emmanuel Macron did not appear to be in the mood to comply with Olaf Scholz's directive. France had declined Germany and Spain's request to restart the Midi-Catalonia Pipeline 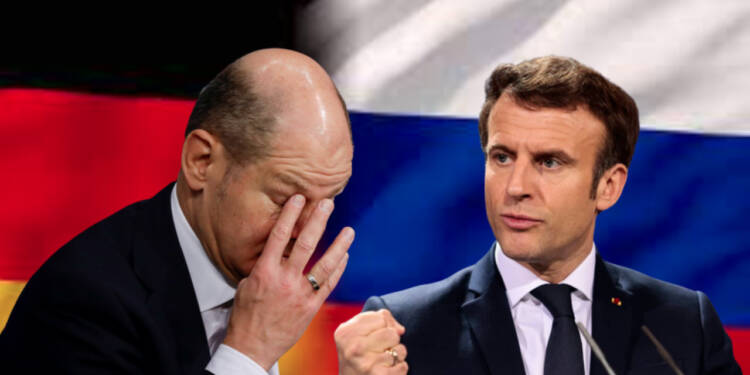 Russia supplied nearly 40% of the European Union’s gas consumption last year, therefore the bloc is attempting to quell the crisis brought on by Moscow’s gas supply cuts. As the worst energy scenario for Europe is becoming a reality, it has come to the realisation that the US can do nothing to save Europe from an imminent catastrophe

Thanks to its mismanagement, US is also experiencing a serious gas and oil problem. Biden’s misguided policies have already caused considerable chaos in the US. In an effort to diversify their energy supplies, many European counties like Germany tried every possible way to secure energy supplies. Western countries even started looking for assistance from Africa. For instance, German chancellor Olaf Scholz tried to gain the support of the African nations during his first visit to Africa in May this year. But all their attempts to woo the African nations have failed miserably.

A tussle between France and Germany

The West is in such a tumultuous position as a result of its overdependence on Russian oil and energy supplies that infighting has begun among Western nations.

Germany, one of the worst hit countries by the Russo-Ukraine is battling with the energy crisis. Berlin’s reserves have been affected too. Energy prices have skyrocketed as the Ukraine war continues, owing to Russian supply constraints, making it increasingly difficult for people to manage their daily lives. The situation in Berlin is incredibly tragic. In order to get the economy back on track, German Chancellor Olaf Scholz is trying just about anything to get back to Normalcy.

A few months ago, Scholz revived talks on the Midcat project, a proposed gas pipeline from Portugal that will run through Spain and France to bring Algerian and liquefied natural gas to central Europe. He pushed for the pipeline to wean Europe from Russian energy dependence, saying he had lobbied strongly for the setting up of such a project. However, France’s President Emmanuel Macron did not appear to be in the mood to comply with this directive. France had declined Germany and Spain’s request to restart the Midi-Catalonia Pipeline. The French ministry led by Agnes Pannier-Runacher in an emailed statement has stressed: “Such a project would require, in best possible scenario case, many years to become operational.”

France has long been opposed to a new cross-Pyrenees pipeline and prefers the installation of new LNG terminals. “I do not understand why we would jump around like Pyrenees goats on this topic,” Macron said, a few months ago, while referring to the project.

Macron is emerging as an important global leader in his second term. Macron’s new prominence stems not only from the European Union’s weight, particularly in economic matters but also from the unique role France sees for itself: as a major power allied with – but epistemologically independent of – the United States.

This positioning has caused problems for many countries, particularly for Germany, which has its own squabbles with France, which will only worsen as a result of France’s recent move.

According to reports, Spain, Portugal and France will build a sea-based pipeline to carry hydrogen and gas between Barcelona and Marseille, substituting plans to extend the so-called MidCat pipeline across the Pyrenees.

Also Read: France won’t continue with its defence trade with Germany, and the reason could be Greece

The route, dubbed BarMar, will mainly be used to pump green hydrogen and other renewable gases but will also temporarily allow for the transportation of a “limited amount” of natural gas to help alleviate Europe’s energy crisis, Portuguese Prime Minister Antonio Costa said.

The two countries have frequently been seen, albeit clandestinely, at a crossroads. Both major European powers are constantly vying for control of the European Union, and they will try anything at their disposal to realise their dreams of becoming a European hegemony. Franco-German military cooperation has recently suffered a setback as well. Macron recently cancelled a major meeting that was scheduled to take place in Berlin and Paris. According to Politico, French President Emmanuel Macron has threatened to postpone a meeting of the French and German governments scheduled for next week due to concerns about a lack of progress in ostensibly cooperative areas such as energy and defence.

Nonetheless, Paris has delivered a crushing blow to Berlin in every major domain, from military to economic. The days of Germany is regarded as a military power are long gone. However, the golden age of France is just around the corner. Paris is ranked seventh among the 142 nations considered for the annual Global Firepower Index (GFP), while Berlin is ranked sixteenth. Germany’s economy is in shambles. What seems inevitable is that France’s recent move to control German gas supplies will eventually lead to the demise of German hegemonic fantasies.

Run by NDP members, Waterloo School Board is an indoctrination centre for kids