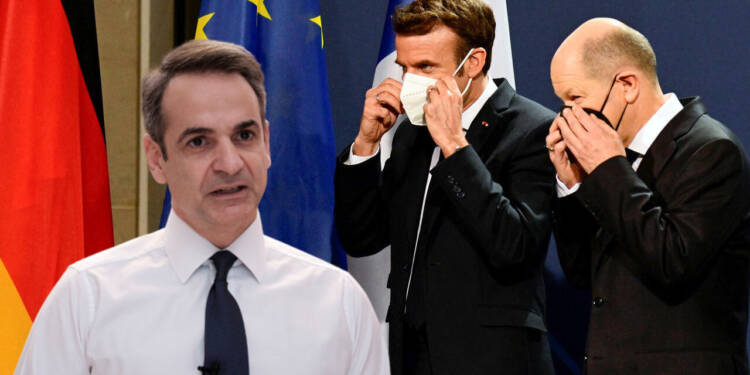 The good old days when Germany was seen as a military power are now past. However, France’s golden times are just around the corner. Out of the 142 nations taken into account for the yearly Global Firepower Index (GFP), Paris is placed 7th while Berlin is ranked 16th. Despite differences on a list of concerns, the countries in the European Union have a wonderful history of unity. France’s ties with Germany, though, are apparently deteriorating now.

Reportedly, there has been a setback in their military cooperation too. In a recent event, Macron cancelled a significant meeting that usually took place in Berlin and Paris, and Greece could be the reason behind it. According to Politico, French President Emmanuel Macron has threatened to postpone a meeting of the French and German governments planned for next week because of concerns over a lack of progress in areas of supposed cooperation such as energy and defense.

Macron and German Chancellor Olaf Scholz, as well as their respective cabinets, were scheduled to meet in Fontainebleau south of Paris, next Wednesday for their yearly Franco-German ministerial council. But, the presidential office in France has threatened to cancel the meeting due to a lack of any progress. If this occurs, it would be the first time that a meeting this extravagant, which has taken place for the past 18 years, has been postponed.

The French government officials are citing the progress of joint projects including the Future Combat Air System (FCAS) fighter jet and the Main Ground Combat System (MGCS) tank as the main points of concern.

The official has stressed, “There isn’t enough progress on topics [of discussion], so it’s possible the council will be postponed to give us more time to work on them,”

A Strain on relations

If Macron indeed cancels such a historic meeting, this would unquestionably get counted as a sign of strained relations. Geopolitical experts in Europe are eyeing this move by Macron as an attempt to avoid Berlin’s call for reviving MidCat gas Pipeline and avoiding additional military aid to Ukraine. However, the reason could be very well, Greece.

Nevertheless, France and Germany are frequently in contact, and their defense collaboration has experienced “ups and downs.” France is possibly declining to meet with Germany this time around because it does not want to assist Turkey in hissing Greece inadvertently.The relationship between Greece and Turkey is stormy, with a troubled past and difficult problems. France doesn’t want to get involved in the crisis as tensions between Greece and Turkey have recently started to quickly escalate.

But, Germany might not think twice before providing Ankara with more weaponry if it means making quick money. In 2020, Germany snubbed Greece and inked submarine deals including with Turkey as a part of a broader effort in extending military cooperation as a part of the NATO alliance. Athens even urged Berlin to cancel the deal as it could give Turkey an unwanted advantage against Greece. But, Berlin notoriously avoided such requests.

As the EU’s big gun was on its side, Ankara had every right to be hovering in midair. Yet, Erdogan was shocked to learn that France was supporting Greece.

In a rebuke, Greece signed a $4.4 billion defense contract with France to buy three naval frigates and six more Rafale fighter jets. Greece and France are getting closer recently, while Germany is forging good ties with Turkey.

Make no mistake, German military is already running short of armament and important military equipment. Furthermore, in recent days, the relations between Turkey and Greece are again quite stormy. If a new armed conflict broke out between Athens and Ankara. Germany may not hesitate to hop on the bandwagon and extend its support to Ankara. But, Paris doesn’t want its hands to get dirty in the middle of a conflict.

Paris has a bee in its bonnet that Berlin might re-route its top-notch military equipment to Ankara, and this is why, Macron is not ready to sit with Olaf at a table, at least for military cooperation.