Turkey will get sandwiched between Russia, Greece-Cyprus and Syria for its overt support to Biden 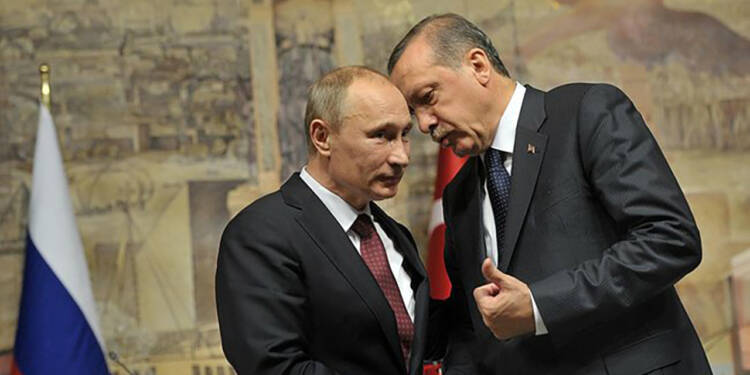 Like a pendulum, Turkey for long kept swinging between Russia and US to win favors from both sides.

But, as the saying goes, those who ride on two boats are bound to sink. Sensing the foreign policy crisis in Ankara, the Turkish leader has now apparently chosen to dance to Washington’s tunes and distance itself from Russia.

So, Turkey might have gotten itself out of the frying pan, but it has unknowingly landed itself directly into the fire.

For long, Turkey arcanely trod a tightrope between Russia and US. But lately, it fell off the tightrope, straight into Washington’s lap. On Tuesday, Turkish President Recep Tayyip Erdogan vehemently supported Ukraine’s claim over Crimea and declared Russia’s control as illegal and immoral.

The bellicose president said, “Türkiye does not recognize the annexation of Crimea and has been openly stating since the first day that this step is illegitimate and illegal. This is a principled stance that has not only legal but also moral foundations.”

Throwing his support behind the Ukrainian president in an unprecedented manner, Erdogan added, “protecting Ukraine’s territorial integrity, sovereignty and political unity is “critical” not only for regional but also for global security and stability.”

Apart from this, Turkey has also started downplaying its defence ties with Russia, a move seen as pro-US. Turkey last week declared that it doesn’t plan to buy new S-400 defence systems from Russia, despite Moscow confirming it publicly. Erdogan has thus left little to the imagination where his allegiances lie, in the aftermath of Turkey’s recent foreign policy makeover.

And that’s where Turkey’s fortunes could well start sinking! Turkey can afford anything but Russia’s wrath in the region. Moscow can effortlessly use a two-pronged strategy to rein in Erdogan’s newfound love for Joe Biden and Washington. It can assault Turkey at its whims and fancies using land as well as naval means, where Turkey won’t have enough options on the table to evade a military confrontation with Russia.

If Turkey goes rogue, Vladimir Putin can activate his Syrian Module to tame Erdogan’s itch for Crimea. Putin has already spelt doom for Turkey by uniting Kurdish and Assad’s forces in Syria. Additionally, Russia has deployed its military assets on the Turkish border to check Turkey’s military offensives on Syrian territories.

The crisis is such for Erdogan that recently he had to publicly admit his country is no longer seeking Bashar-al Assad’s removal from the presidential office. Simply put, Erdogan meekly surrendered before Putin, because Assad is a strong Putin ally. And he definitely doesn’t have the balls to confront Putin on the battlefield.

Secondly, Russia can simply choose to declare the 1936 Montreux Convention illegal, null and void, which can severely hamper Turkey’s control over the Bosporus and Dardanelles Straits. Under the treaty, Turkey gets to control the flow of military vessels and warships through the straits.

Turkey being a NATO member country, has long acted against Russia’s interests. By delegitimizing the 1936 Montreux Convention, Moscow can simply flood the Black Sea and the Mediterranean Sea with its military vessels and warships, and prepare a nice burial for Ankara’s expansionist ambitions.

EU’s involvement in the conflict

Interestingly, Turkey is surrounded by enemies in the region, who tend to share good, if not amicable, ties with Russia. Greece and Cyprus are two major countries that might not shy away from jumping on the bandwagon. Greece has long accused Turkey of undermining its territorial and maritime sovereignty in the Aegean Sea region. Turkey also shares similar conflicts with Cyprus.

So, in case a military confrontation breaks out between Turkey and Russia, Greece and Cyprus are also expected to join the fray. And once Greece gets itself involved, EU’s two superpowers, that are Germany and France, are also bound to join in. Greece is strongly backed by Europe’s largest naval power France, while Germany has allegedly helped Turkey bolster its stance diplomatically as well as militarily.

When it comes to geopolitics and foreign policy, Turkish president Erdogan is all of a doodah. It looks like he’s all over the place. Biting off more than he can chew is his favourite pastime. But his recent adventures have now put Turkey on a suicidal trail. And Turkey won’t be hounded by Russia only, Greece and Cyprus along with France might also not like to squander this godsent opportunity.