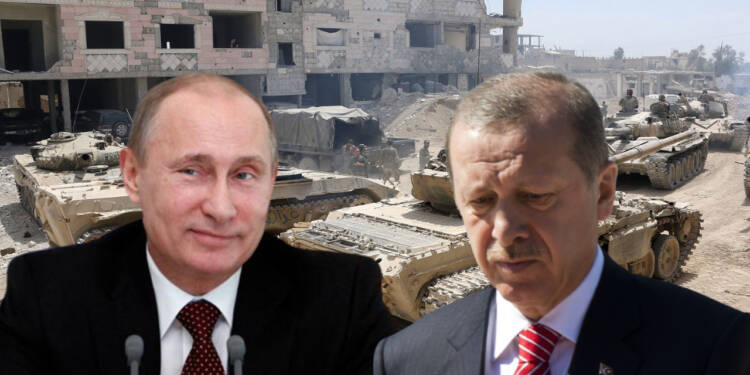 Russia and Turkey could be at the brink of a major clash, a war to be precise. Why? Well, Turkey’s President Recep Tayyip Erdoğan is bullying Syrian President and Putin ally Bashar al-Assad. Erdoğan wanted to create a 30 km deep safe zone on Syrian soil while Russia was fighting Ukraine.

However, Putin is already winning the war in Ukraine. And now, he has set his eyes on the next goal- put Erdoğan in his place. And to be fair, this is just one of the many fronts between Russia and Turkey that could explode into a wide war.

Northeast Syria is becoming a junction of global rivalry. The region is presently held by the Syrian Democratic Forces (SDF). SDF is led by a Kurdish armed group called the People’s Protection Units (YPG).

Turkey considers the Kurd fighters to be terrorists, whereas the US and SDF have functioned as allies in the battle against the Islamic State. So, the US is happy with SDF control in the region while Syria wants to create a “safe zone” in Northeast Syria by launching a military operation.

Putin, on the other hand, is friends with Syrian President Bashar al-Bassad and wants Damascus to assert its authority over this volatile region. He is therefore also opposed to any Turkish presence in Northeast Syria.

However, Erdoğan recently announced, “We will soon take new steps regarding the incomplete portions of the project we started on the 30km deep safe zone we established along our southern border.” Erdoğan must have thought that Biden is incompetent and Putin is busy in Ukraine. So, who will stop my invasion?

Putin prepares his troops for action

Erdoğan however seems to have miscalculated Russia’s reaction.

As it turns out, Moscow has dispatched military aid including warplanes and helicopters to the Russian forces stationed in Northeast Syria.

Meanwhile, Russian Foreign Minister Sergei Lavrov too has reiterated that Moscow will continue to support the full restoration of Syria’s territorial integrity. So, if Turkey is planning to push ahead with its military operation in Syria, it must get ready to face the wrath of Russian military might.

However, Syria is just one of several factors that could contribute to a warlike scenario between Russia and Turkey. Only recently, Russia and Turkey were standing at the brink of a naval war when Ukraine sunk one of Russia’s Moskva warships in the Black Sea.

Turkey had then closed the passage of warships through the Bosporus and the Dardanelles. This effectively meant that the Russian Navy couldn’t navigate its vessels between the Mediterranean and Black Seas.

Erdoğan thus used Turkey’s control over navigation into the Black Sea and miffed Russia right in the middle of a war. Putin is winning the Ukraine war anyway but if push comes to shove, he would want to settle the issue surrounding the Turkish Straits for once and for all.

Keeping the NATO in check

Meanwhile, Putin would also want to exploit Erdoğan’s hatred for the Kurd fighters to keep NATO in check.

Remember, NATO has been trying to expand itself despite Moscow’s objections. It is trying to induce even Finland and Sweden into its fold, and the two countries have even applied for membership in the military alliance.

Yet, Turkey, an existing NATO member, has already objected to the membership of Finland and Sweden. Erdoğan’s administration accused them of supporting the banned Kurdistan Worker’s Party (PKK) and other such groups.

If Turkey continues to exercise veto, Finland and Sweden will not be able to join NATO. This serves Putin’s interests of restricting NATO’s expansion. Now, with a likely Russian troops buildup in Northeast Syria, Putin can tell Erdoğan- if you want Turkish forces to stay unharmed, don’t lift the veto on membership of Sweden and Finland.

Putin has thus put Erdoğan in a fix as Russia gears to take on Turkey in an intense war.