A Turkey- Russia naval war looks like a possibility now 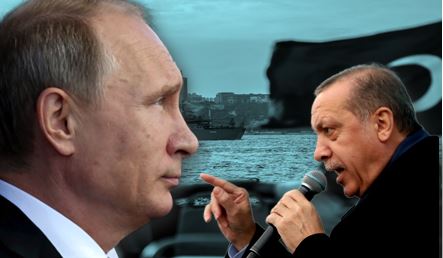 After the sinking of one of its vessels, Russia is looking to transit its naval vessels in and out of the Black Sea. However, Turkey has closed the Bosporus and the Dardanelles to warships since late February. Russia’s patience is meanwhile wearing thin. And if Turkey still insists on keeping the Straits closed, a clash of brutal means will raze past the Bosphorus in the near future.

Russia has become somewhat apprehensive about its Black Sea fleet after one of its frontline assets- the guided-missile cruiser Moskva was sunk on Thursday.

Russia too has confirmed that the warship sunk. Meanwhile, Ukraine asserts that the Russian warship was struck by Neptune anti-ship missiles fired by its forces.

Meanwhile, Nikkei Asia quoted a US defense official as saying, “In the wake of the damage that the Moskva experienced, all the northern Black Sea ships have now moved out, away from the northern areas where they were operating.”

So, what we do know is that something big has happened in the Black Sea and Moscow is visibly concerned. Therefore, it might need to make some major readjustments in the Black Sea region including reinforcement of its Black Sea fleet by sending in a new warship to replace the Moskva and withdrawing vulnerable assets out of the Black Sea to the Mediterranean. And this is where Turkey comes in.

The geographical location of Turkey is such that it sits right across the Black Sea and controls the sea passage from the Black Sea to the Mediterranean.

So, if a vessel has to transit between the two water bodies, it must pass through the two Turkish Straits- Bosphorus and Dardanelles. Under the Montreux Convention of 1936, Turkey can block ships of belligerent powers from passing through the two Straits during wartime. However, vessels returning to their home bases are allowed to pass even during wartime.

And Turkey has closed these two Straits since late February when the Russian invasion of Ukraine started. This effectively immobilizes the Russian Navy’s Black Sea fleet. Currently, four to five Russian warships are deployed in the Black Sea but neither can they move out nor can the fleet be replenished by other Russian naval assets.

It is quite possible that Moscow may have informally requested Turkish authorities to open the two Straits for its warships. However, a senior Turkish official told Nikkei Asia that Ankara will not allow the entry or exit of naval vessels as long as the war continues.

When asked if the conditions change if the war continues, the official said, “The answer is a clear ‘no’.” Turkish Foreign Minister Mevlut Cavusoglu said that the country is still implementing the Montreux Convention in its entirety.

This is putting Moscow in a very awkward position within the Black Sea region. Russia wants to take over Ukraine’s Odesa seaport, which serves as a strategic maritime asset in the region.

Can Kasapoglu, director of the security and defense studies program, said, “This will seriously discourage Russia from staging an amphibious assault on Odesa.” Kasapoglu added, “The odds of such a scenario have significantly diminished.”

Meanwhile, the US too is provoking Turkey to remain adamant about keeping the Turkish Straits closed. Pentagon spokesperson John Kirby said, “The government of Turkey has been very responsible in how they’ve managed their Montreux responsibilities — the entry into and the exit from the Black Sea.”

For Moscow, time is running out very quickly. It must find a way to break through the Turkish Straits. Either by negotiating a deal with Turkey or if Turkey doesn’t agree, by using offensive means. Turkey has a history of rubbing Russia the wrong way. This is why Moscow and Ankara had come close to clashing heavily in Libya and Nagorno-Karabakh region.

However, this time Turkey is affecting Putin’s Ukraine war and Putin is unlikely to tolerate that.

All the bright places quotes: a beautiful collection