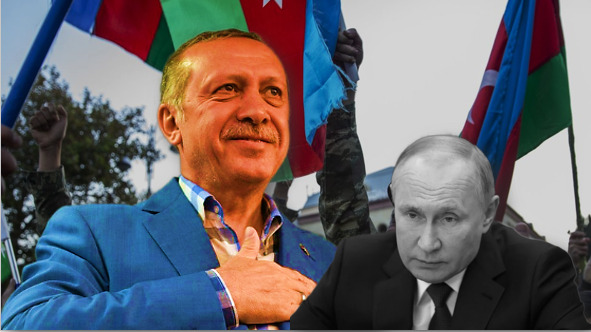 On Saturday, Russia’s Defence Ministry accused Azeri armed forces of penetrating into a zone manned by Russian peacekeepers in the Nagorno-Karabakh region. Russia has also accused it of carrying out four drone strikes in the disputed region.

Azerbaijan has, of course, denied Russia’s allegations. It claimed that “illegal” Armenian armed units attempted an act of sabotage, but were repelled after  “immediate measures” were applied. While it may seem like a dispute between Azerbaijan and Russia, it has Turkey written all over it.

Read more: Armenia is India’s natural ally and India must go all out to help it in its war with Turkey and Azerbaijan

After the war, it became clear that Turkey had its own objectives to achieve. Ankara’s main aim was to reunite the Turkic world extending from Central Asia to Azerbaijan, and reaching right up to Turkey.

Turkey lacks a direct link to Central Asia, a region, considered to be Russia’s sphere of influence, and the only roadblocks are Armenia and the Nagorno Karabakh Republic. Attacking Armenia and taking control of the Nagorno-Karabakh region was a part of Erdoğan’s ‘Turkic world’ ambitions.

Read more: Central Asia is heading towards a destabilising power struggle, but the world seems oblivious towards it

In November last year, Armenian foreign minister Ararat Mirzoyan pointed out that Turkey was compelling it to allow “a ‘corridor’ connecting Azerbaijan and [the Azerbaijani exclave of] Nakhichevan.” The corridor is crucial for Turkey, for it will allow it access to Central Asia.

Russia showed that it is the big boss in Central Asia

Erdoğan was trying to bring the Organization of Turkic States at the center stage in a bid to assert control over Central Asia. However, the Kazakhstan protests in January this year changed everything

President of Kazakhstan Kassym-Jomart Tokayev requested Russian President Vladimir Putin to help suppress the violent protests. This came as a huge blow to Erdoğan’s dreams of creating a Turkic world under his leadership.

Bayram Balci, an Istanbul-based expert said, “The fact that Tokayev called Russia and Putin and not Erdogan is proof that the big boss [in the region] is still Russia.”

Kazakhstan, the largest Central Asian country, still feels closer to Moscow than Ankara despite whatever Erdoğan is brewing up in the South Caucasus. Except for Azerbaijan, Turkey enjoys no real influence in any of the so-called Turkic world, as Central Asian countries maintain their Soviet-era links to Moscow.

Turkey orchestrating a coup against Moscow

So, a bitter Erdoğan was actually waiting for an opportunity to make a comeback in the region.

Once Russia went to war with Ukraine, Erdoğan sensed the perfect opportunity to pounce. Even during the 2020 war, Russia hadn’t joined the war from Armenia’s side. And this time around, it is busy with a big military operation in Ukraine. So, it is unlikely to retaliate against Turkish actions in the South Caucasus.

Turkey thinks that it can strong-arm Armenia into agreeing on the corridor or even apply diplomatic pressure and achieve its geopolitical objectives.

While the world looks at Ukraine, another crisis could be shaping up in Armenia as Turkey attempts a coup against Moscow in Central Asia.