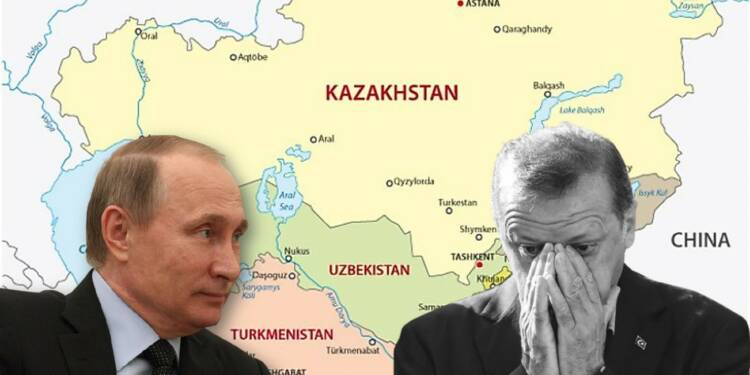 Turkish President Recep Tayyip Erdoğan is a true bully. In his quest to rebuild the ruthless Ottoman Empire, he has bullied everyone in the vicinity- Greece, the EU, Syria and Armenia to name a few. And Erdoğan doesn’t listen to anyone. He simply doesn’t care for criticism and persists with his bully tactics. But there is one man who knows how to straighten up Erdoğan. He is Russia’s President Vladimir Putin.

Yes, Putin, who has a history of showing the Turkish President his place, has humiliated Erdoğan again- this time in Kazakhstan. You see, Ankara had high hopes of uniting the Turkic world from Central Asia to Turkey under its leadership. Russia has shattered this dream. Russia has actually managed to catch Turkey napping and kick it out of energy-rich Central Asia.

The Turkish President has a point to prove. Being a wannabe Khalifa, Erdoğan wants to unite the entire Muslim world and uniting the Turkic Muslim world is the first phase of his lofty global ambitions.

Ankara’s actions continuously point out its intentions to control Central Asia- a region considered to be a part of Russia’s privileged sphere of influence. Turkey went as far as helping Azerbaijan to wrest large chunks of territory in the disputed Nagorno-Karabakh region from Armenia.

And while the Turkish campaign in Azerbaijan’s favour seemed like a local conflict, it did have a Central Asia connection. Turkey lacks a direct link to Central Asia and the only roadblocks are Armenia and the Nagorno Karabakh region. By attacking Armenia, Turkey wanted to unite the Turkic world from Central Asia to Turkey under Ankara’s leadership.

How Russia stunned Turkey in Kazakhstan

But if Turkey really wants to assert its influence in Central Asia, it cannot do so without consolidating its position in Kazakhstan- the largest country in the region with a population of 18 million. Kazakhstan is also the main energy power in the region with vast deposits of energy and mineral resources.

Turkey does have an Istanbul-based body called the Organization of Turkic States for reaching out to the Central Asian States and also figures amongst key trade partners of Kazakhstan with an annual trade volume of around $2 billion.

However, when Kazakhstan witnessed unrest and rampant violence over escalating fuel prices at the beginning of this year, Turkey was found to be clueless. Over 160 people were killed in the country, as per Kazakh authorities and Russia seems to be the only power responding properly to the crisis.

Kazakh President Kassym-Jomart Tokayev blamed foreign forces for the unrest and called it a “coup attempt. He also requested the Russia-led Collective Security Treaty Organization (CSTO) to “help Kazakhstan overcome this terrorist threat.” And Putin was happy to oblige.

Russia emerged as a clear winner in the process. An Istanbul-based analyst said, “Russia at the invitation of the Kazakh government has effectively occupied Kazakhstan.” The analyst added, “To imagine any role for Turkey beyond this point would be fantasizing.”

Putin too is asserting himself in Kazakhstan. He said that the CSTO had managed to “prevent the undermining of the foundations of the state, the complete degradation of the internal situation in Kazakhstan and block terrorists, criminals, looters and other criminal elements.” The Russian President added, “Of course, we understand the events in Kazakhstan are not the first and far from the last attempt to interfere in the internal affairs of our states from the outside.”

Turkey offers help to Kazakhstan- too little too late

Russia has doused the fires in Kazakhstan. It has helped Tokayev strengthen his control in Kazakhstan and Tokayev is now asserting himself. He has even cracked down on former Kazakh President and his mentored-turned-rival Nursultan Nazarbayev by dismissing him from his role as chair of the Security Council. Head of the security services Karim Masimov, one of Nazarbayev’s close aides, too has been sacked.

Nazarbayev is on the losing side. This is a setback for Turkey as the former President has been a long-time ally for Ankara and had even mediated between Putin and Erdoğan after Turkey downed a Russian aircraft over Syria in 2015.

Russia has managed to push Turkey out of Kazakhstan. And now Turkey has just started speaking about the unrest in the Central Asian nation. Turkey’s Foreign Minister Mevlut Cavusoglu said, “Turkey hopes that Kazakhstan will attain stability and peace as soon as possible. For this, Turkey and the Organization of Turkic States will lend all kinds of support.”

Turkey’s Defence Minister Hulusi Akar too said, “Kazakhstan is an important ally of Turkey, and we hope for the earliest possible stabilization of the situation and ensuring law and order in this country. If Kazakhstan makes any request to Ankara, we will be ready to provide it in full.”

But the fact of the matter is Putin has already secured Kazakhstan with the aid of CSTO and has established the primacy of Moscow in Kazakhstan. He has shown that Russia remains the main power in terms of influence in post-Soviet Central Asian Republics. This effectively crushes Erdoğan’s Central Asia domination dreams.