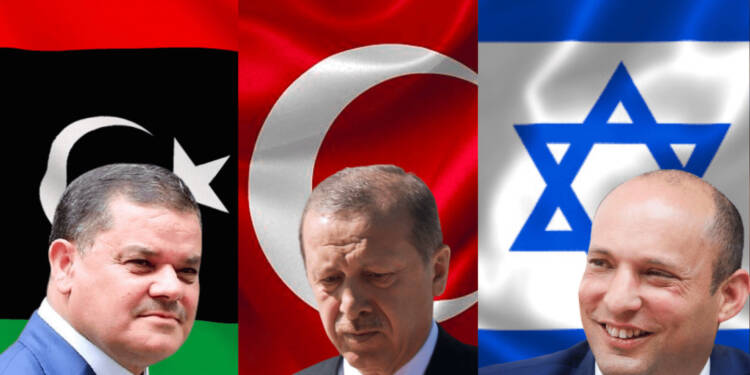 Turkish President Recep Tayyip Erdoğan is working on an agenda- consolidating Turkish influence in the entire Middle East with the aid of mercenaries and militias. He went as far as supporting a violent, Islamist regime in Libya.

Erdoğan wants to keep winning favour with Libya and pursue his political Islam brand in the North African country, but now he is facing a stiff enemy- Mossad.

According to the reports, Abdulhamid Dbeibeh asked the Jewish State to assist him in staying in office during the pre-election transition period in Libya. In return, Libya may help Israel sign another Abraham Accord- this time with Tripoli.

Again, reports had suggested that Hifter had offered to recognize Israel and establish diplomatic relations, in return for the Israeli military and diplomatic support of himself or his father.

It was also reported that Saddam Hifter had been in contact with Mossad agents in the past.

However, an unnamed official in Hifter’s campaign had said, “It’s still too early to discuss a normalization agreement with Israel and how that would look. First of all, Gen. Haftar has to actually win [the elections], and we are certain he will. As of now, though, we have no interest in bringing the issue of future relations with Israel to the agenda, because the Libyan public harbours traditional and structured hostility toward it.”

Why are rival political camps in Libya seeking Israel’s support?

Transition PM Abdulhamid Dbeibeh and Hifter are considered rivals. And both of them are seemingly trying to impress upon Mossad officials. Of course, both the camps deny having anything to do with Israel because of the public sentiment and religious extremism in Libya.

But the big question is why they are trying to win favour with Israel?

The GNU is a neutral power. It was formed as part of an international mediation effort to end the armed conflict between the internationally recognized Government of National Accord (GNA) and Khalifa Haftar-led Libyan National Army.

The GNU, however, is an interim government and will stay in power till the elections. Both the Haftar (of Hifter) father-son duo and interim PM Abdulhamid Dbeibeh want the same thing- political power. I mean this is what all politicians actually want, so it isn’t really a surprise.

But being politicians in a wartorn country, both of them need external support for survival and this is why they are looking at a competent power like Mossad.

Turkey has been trying to reduce Libya into a client State of sorts. A puppet regime in Libya helps Erdoğan achieve his ambition of controlling the resource-rich Eastern Mediterranean.

This is why Turkey supported the radical GNA in Tripoli, whereas other countries like Russia, Italy, the UAE, France and Egypt supported the Haftar-led forces.

But with the GNU coming to power, geopolitical dynamics changed. Winning favour with GNU became more important. Erdoğan tried to embrace the GNU and even invited interim PM Abdulhamid Dbeibeh for a visit to Turkey early into his tenure.

However, Mossad seems to have caught Turkey by surprise with the latest reports of a meeting between Abdulhamid and David Barnea in Jordan.

Khalifa Haftar was always likely to choose Israel over Turkey, because of his commitment to fight Islamist extremism and eradicate jihadist forces from the region. Turkey is the hotbed of jihadist militias, so Haftar couldn’t have relied on Ankara.

So, the two main rival camps in Libya are now banking on Israel and Mossad. This leaves little breathing space for Turkey in wartorn Libya. Turkey’s biggest Arabian ally has thus ended up dumping Ankara for Israel.