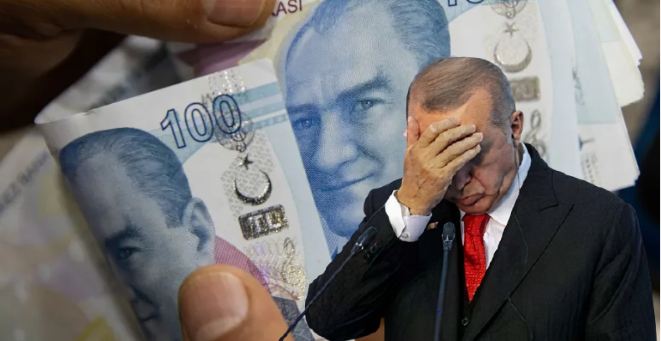 Turkey is not in a good state. Its economy is collapsing. Its currency is nosediving at a breakneck pace. So, Turkish President and part-time wannabe caliph Recep Tayyip Erdogan has rolled out some desperate measures to revive the falling Lira. But nothing can save Turkey. Its President has, to put it frankly, gone mad. Erdogan is no longer in command of his senses. He is letting Islam dictate Turkey’s economic policy.

Rest assured; this will be the end of Turkey. In the latest blow to Turkey’s economy, Erdogan has packaged a suicidal decision as to the saviour of the country’s currency.

But today, even Turkish investors are stashing their cash in foreign exchange deposits. That is what has led to the downfall of Lira’s fortunes. Now, Erdogan wants to appear to solve this problem, which is why he has announced a new lira investment instrument that is denominated to foreign exchange rates.

Lira recorded a short-term recovery after Erdogan unveiled his ‘dollarisation’ plan to save Turkey’s currency. But take this from us – Turkey will crumble under the weight of this plan. Erdogan is making the worst mistake of his life, and it will catch up with him soon.

The new tool offers a temporary and risky solution to Lira’s downfall. If investors convert their foreign currencies into Lira and deposit them in a savings account with a certain term of maturity, Turkey’s treasury guarantees that it will get the same return as forex markets.

According to the Middle East Eye, if the forex markets drop below the official interest rates, the investor will still get an official interest rate return. In a statement, Turkish Foreign Minister Nureddin Nebati said that the new instrument will have three-, six-, nine- and 12-month maturity term options.

What this means is that Turkey will now incentivise investors to keep their cash within the country, and not stash it in foreign exchange deposits. Turkey will do so by offering the same returns as dictated by foreign exchanges. Now, investors are rushing to buy Lira. According to the Union of Turkish Banks, more than $1bn had been already sold through the banks as Erdogan spoke, even though the markets were closed.

How Turkey’s Public Will Pay for Erdogan’s Misadventure

Do you know why Turkey is such an economic mess today? It is because Erdogan is an Islamist fanatic, who is making decisions based on Islamic economics. Yes, as shocking as this would sound to you, this is a thing.

It is even in trend in Islamic nations. And since Erdogan likes to showcase himself as the Caliph of the Muslim world, he is following such economics in its entirety. Turkish banks have extremely low-interest rates. The low-interest rates have made loans cheaper in Turkey – and practically anybody can avail of them.

This has caused a currency overflow in the Turkish economy, or what is known as ‘inflation’. In the last month, the Lira has lost 35% of its value against the dollar. Overall, the currency has fallen by 50% this year.

What Erdogan is now offering is 40 per cent interest to investors who keep cash within Turkey and buy more of it. But who do you think is going to pay for the difference between actual interest rates of Turkish banks, and those offered by the Turkish government? The public exchequer.

What that means is that the Turkish public will be paying for Erdogan’s big bang splash. With even more Lira being injected into markets, inflation will soar even further. This move will also increase the public debt, with the treasury paying any difference between the foreign exchange rate and Lira.

Turkey has not taken such a decision for the first time. It tried doing so in the 1970s as well. Guess what happened? The scheme eventually led to a huge credit explosion by local banks and triggered a new wave of inflation. The same will happen this time too. And Erdogan will have nothing but his faith to blame for it.