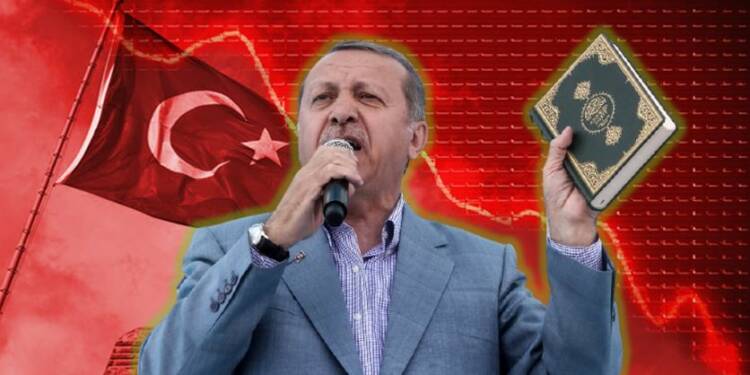 What do you call someone who is intent to destroy your country’s economy and the livelihood of citizens? How do you react when you realise this person is your country’s president? The people of Turkey are faced with similar questions. In any other part of the world, and with any other leader, it could be said that the person has lost his mind. But in Turkey, Recep Tayyip Erdogan is in-charge. And he is not a fool like Rahul Gandhi, an imbecile like Joe Biden or an economic dolt like Xi Jinping.

Erdogan is, in fact, an Islamist fanatic who is seeking the guidance of Islam to run Turkey’s economy! Do we need to tell you how this is playing out for Turkey, and how it’s going to end for it?

Also read: Erdogan is destroying Turkey to save himself

In the last one month, the Lira has lost 35% of its value against the dollar. Overall, the currency has fallen by 50% this year. The Turkish economy is crying out for help, but Erdogan is busy Islamising it. Turkish citizens have been burning the Lira on the streets amid a surge in inflation. In November, the inflation rate crossed more than 21%. Turkish citizens are cutting down on food consumption – especially that of meat, and are also lining up in queues for subsidised ration.

Now any economist would advise increasing interest rates to stop this carnage, but Erdogan has other ideas. “They say we are lowering interest rates. Expect nothing else from me. As a Muslim, I will do everything required by me under Islamic law. I will continue to do that. This is the Islamic law,” said the President of Turkey.

Not accepting his own policy failures, Erdogan now aims to shield himself from criticism by using religion.

Harming Islam to get off from the hook cannot be an act of a true Muslimpic.twitter.com/3kGmTsUYSX

How the Turkish economy is bleeding because of Islam:

The Turkish economy – which was not very long ago among the best performing in Europe, is today in doldrums. The sole reason why Turkey is gripped by an unsparing inflation and its currency – the Lira is on its deathbed, is because Erdogan has cut down interest rates to unsustainably low levels. The low interest rates have made loans cheaper in Turkey – and practically anybody can avail them.

This has caused a currency overflow in the Turkish economy, or what is known as ‘inflation’. Essentially, the Lira has lost half its value. It has become cheap. Prices have shot up, and people do not have enough cash to sustain their day-to-day needs. The people of Turkey are becoming statically poorer. In 2013, the per capita GDP in Turkey stood at $12,582, and today it stands at a mere $8,538.

Amidst such an economic bleed, Erdogan has turned to his faith. Mind you, his beliefs are extremist in nature. Erdogan has forced the country’s central bank to keep interest rates low. Erdogan says Islam won’t allow him to cut interest rates. His exact words were: “We’re lowering interest rates. Don’t expect anything else from me. As a Muslim, whatever (Islamic teaching) requires I will continue to do that.” In Islam, giving out loans at exorbitant interest rates is forbidden. As a matter of fact, any sort of interest is forbidden, so, don’t be surprised if Turkish banks start giving out cash for free to the citizens!

Erdogan’s Islamist fanaticism is forcing the shutdown of Turkey. Turkish Lira weakened more than 8% to break past 18 per dollar on Monday, heading for a fifth day of declines. The currency has retreated 58% this year versus the dollar. In fact, you will be shocked to know that Erdogan has modelled his entire economic policy on the basis of lower interest rates and cheap currency, which will only worsen the country’s inflation and lead to the complete decimation of Lira.

The currency drops in Turkey are so bad that they are triggering multiple market-wide circuit breakers in a matter of few hours every day. On Friday, trading of equities, equity derivatives, and debt repo transactions, were automatically halted. The trading resumed at 5:24 PM local time, and the index nosedived by 9.1% within the first two minutes of operation. With a slumping Lira and decreasing interest rates, inflation in Turkey is bound to surge even further and breach the record 25% inflation.

Turkish investors have completely lost their confidence in the Turkish economy and prefer foreign stocks to stash their money in now. Here’s what Nick Stadtmiller, director for emerging markets at Medley Advisors, was quoted as saying by Economic Times: “Turkish stocks have surged despite a worsening macro backdrop. But now, Turks pulling their money from the stock market may represent an acceleration in the trend of local capital outflows from the country.”

Also read: Turkey shuts down its own markets as Lira enters freefall

Erdogan’s approval ratings have slumped to an all-time low of 39%. Erdogan’s AKP has support from just 26% of the voters. The national alliance, which is a collective of major opposition leaders, seems to have gotten ahead with almost 40% of the voters backing them. Come 2023, Erdogan will find his fascination and addiction to Islam being the prime reason why he gets kicked out of office.