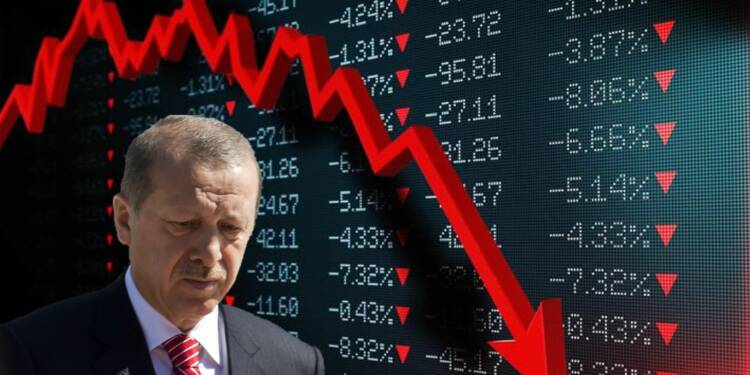 How does history judge a leader? Military exploits matter only if you were at a big war. Cultural Renaissance is relevant only if you were pulling your country out of a deep, long-lasting crisis. In ordinary times of peace, the growth of the economy and prosperity of the nation are what matters most for the overall image of a leader. And Turkish President Recep Tayyip Erdoğan seems to be failing badly on this front.

A lot has been said and written about Erdoğan’s Islamism and support for mercenaries or jihadist militias. Now, let’s look at Erdoğan’s reign of misery through economic indicators. In the 2000s, Erdoğan was a reformist of sorts and managed to fuel good economic growth. But of late, he is on course to devastate his economy with high inflation, low interest and depreciating Turkish currency Lira.

Till 2013, the Turkish economy was actually in good shape. However, in 2013, Erdoğan faced unprecedented anti-government protests and since then, the Turkish President has taken up a strongman image which hasn’t really helped matters.

Turkey is becoming poorer, and income disparities are becoming more visible. As per the World Bank, over 1.5 million Turks fell below the poverty line.

Meanwhile, a Gini index of income and wealth distribution shows rising income inequality in Turkey for the past decade. Erdoğan had stormed to power in 2003 and till 2011, income inequality continuously declined in Turkey. In 2011, the Gini coefficient dropped to around 38. On a scale of 0 to 100, a Gini coefficient of 0 represents perfect equality and 100 represents perfect inequality.

Both Foreign Direct Investment (FDI) and the involvement of foreign investors in the Turkish economy are going down. FDI went down to $5.7 billion last year, as against the record $19 billion in 2017.

Turkey is an economy largely dependent on foreign investments and tourism. In January 2017, Erdoğan even launched the citizenship by investment program. However, foreign investors are simply not ready to get involved in the volatile Turkish economy.

Turkish poverty is getting further triggered by rising unemployment levels in the economy. In 2013, unemployment in Turkey stood at around 9% but it has now risen to 12 percent.

Inflation is soaring in Turkey with the annual rate just below 20 per cent. Turkey is traditionally believed to be a cheap country with a low cost of living, affordable rents and economical food prices. But Erdoğan’s reign is changing this.

Food inflation has been going up continuously in Turkey. In the month of August, it reached a painful 29 percent. Government threats of investigations and fines for selling at higher prices are not working as high food prices are a result of the general price level rise in the country.

As per a January report by Reuters, food is getting so expensive and unaffordable in Turkey that a mock photo circulating on Twitter showed a man proposing a woman with cooking oil can instead of a wedding ring. Prices have only risen further since then.

What is driving Turkish economic indicators into a bad shape

Everything in Turkey is boiling down to Erdoğan’s absurd policy of maintaining low interest rates. In Islamic tenets, ‘Riba’ or interest earned by depositing or lending money is considered unholy (haram). As per IMF’s definition, Shariah doesn’t allow payment or receipt of interest (riba). Therefore, Erdoğan opposes any move to hike interest rates even as Turkey faces very high inflation rates and a constantly depreciating currency, Lira.

Erdoğan maintains de facto control over the Turkish interest rates and constantly gets the central bank to slash interest rates which keeps pushing inflation further by allowing the low cost of borrowing and higher liquidity. The Turkish central bank cut interest rates to 16% from 18% for the second straight meeting on Thursday. This again led to a depreciation in Lira and pushed it down to a record low.

It is really becoming a vicious cycle in Turkey. Lower interest rates are leading to higher inflation and depreciating Lira. Low currency value is making imports of fuel and other commodities more expensive, which again pushes inflation.

Low interest rates and borrowing costs are allowing the Turkish construction industry to pump GDP growth. Turkey is indeed expected to grow by 9% in 2021, but it is actually fake growth. After all, there is no use of growth numbers if basic commodities like food and fuel are becoming more expensive for Turkish citizens.

Moreover, the rate of inflation is over twice the GDP growth rate, which means that an average Turkish citizen is effectively getting poorer. Mild inflation is necessary to stimulate economic activity and enable profit-making but in Turkey’s case, the GDP growth is coming at the cost of the people themselves.

Meanwhile, you can expect a further plunge in foreign investments in the Turkish economy. Turkey has been put on the FATF Grey List over its failure to control money laundering and terror financing. Once, a country is put on the FATF Grey List, foreign investments dry up as it hurts the relations of the Grey Listed country with big international banks and investors that follow FATF rankings.

Erdoğan’s geopolitical ambitions of using terrorist groups and mercenaries to dominate conflict zones like Syria and Libya are thus taking a toll on the Turkish economy. In fact, Turkey is now bound to face a backlash with drying foreign investments that add up to other woes like high inflation rates and a constantly depreciating currency.