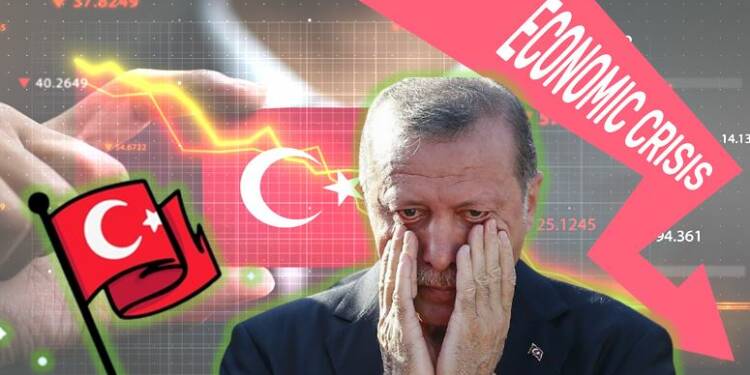 Turkey’s economy is sinking faster than Erdogan’s fortunes. Turkey’s currency Lira entered a free-fall zone on Friday, with the Borsa Istanbul 100 index extending declines to a new low. The declines recorded were so steep that it triggered a market-wide circuit breaker twice in an hour.

Trading of equities, equity derivatives and debt repo transactions were automatically halted. The trading resumed at 5:24 PM local time, and the index nosedived by 9.1% within the first two minutes of operation.

Inflation in Turkey has surged over 21%. Despite the inflation, the Turkish central bank announced a 1% reduction in its benchmark repo rate to 14% on Thursday. This has further strained the already-stressed Lira, which has already lost its valuation by 40% of its value against the dollar over the past month.

The bourse ended the day at 8.5% lower value, registering the second biggest sell-off of the year and the biggest after March when the departure of the then-central bank Governor Naci Agbal had spurred turmoil in Turkish financial markets.

Although the Borsa Istanbul Index has strongly rallied this year in terms of the Lira, it is still down by 36% in dollar terms, thus making the bourse the worst-performing equity market in the world. As experts suggest, this massive sell-off may prove to be a turning point in local sentiments in Turkey.

Nick Stadtmiller, director for emerging markets at Medley Advisors, was quoted as saying by Economic Times that “Turkish stocks have surged despite a worsening macro backdrop. But now, Turks pulling their money from the stock market may represent an acceleration in the trend of local capital outflows from the country.” This shows that Turkish investors have completely lost their confidence in the Turkish economy and prefer foreign stocks to stash their money in.

Also read: Economically Devastated Turkey is looking forward to the UAE buying it out

Before that, the Lira fell by 5.7% on Thursday following a decision by the central bank to cut borrowing costs for the fourth straight month. To offset the impact of rising inflation, Turkey has also raised the country’s minimum wage by 50% to $275 per month.

President Erdogan is believed to have exerted pressure on the central bank to lower the borrowing costs. Officials supporting Erdogan’s decision say that lower interest rates will boost the country’s exports and economy, and help the creation of jobs and employment, but experts remain skeptical amid the roof-breaking inflation.

Also read: Erdogan is destroying Turkey to save himself

As data from the past four months suggests, the strategy of lowering the interest rates has not eased Turkey’s economic woes. Even industry experts share skeptical views on whether Erdogan’s economic policies will help Turkish businesses or not.

Richard Segal, a research analyst at London-based Ambrosia Capital, was quoted as saying by Aljazeera that “The typical reaction to depreciation in emerging-market stock markets is a rally as investors use equities as a hedge and the leading shares often have a lot of hard currency revenues.” He added, “However, today is different due to the volatility of the exchange rate, and the lira is approaching rates, which suggest bank capital ratios are running low. In addition, some business groups have begun to speak out more publicly.”

Also read: Erdoğan and Xi Jinping are on a collision course in Africa

Unemployment in Turkey is rising. Inflation is surging at a mad pace. Investors are fleeing and businesses are mired in volatility in markets. Erdogan’s popularity has nosedived over the past few years. People and businesses are rising up in arms against the Turkish government for orchestrating this massive breakdown in the economy. Erdogan’s fall is imminent, but Turkey’s collapse has already begun.