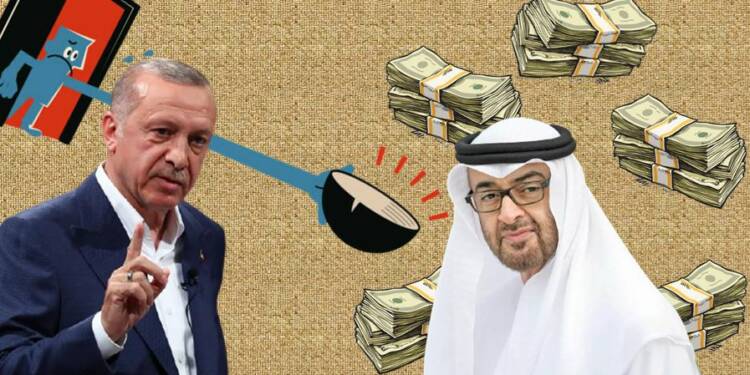 From challenging the authority of Saudi Arabia – the de facto leader of the Muslim world and the Emiratis in the United Arab Emirates (UAE), Turkey and its madmen leader Recep Tayyip Erdogan have come a long way. Ankara is now willing to lie prostrate in front of the UAE regime, so that the wealthy Emiratis can bail the country out of the acute, financial distress it is currently facing.

Reportedly, Ankara will host Abu Dhabi’s Prince Mohammed bin Zayed al Nahyan on Wednesday (November 24) and according to close sources, will attempt to serenade the prince to float a bloated bailout package.

An official statement from the Turkish president’s office read that the two leaders would discuss bilateral ties as well as steps that can be taken to expand cooperation. They would also exchange views on regional and international developments, and ways to increase economic cooperation.

The visit by the crown prince is his first official trip to Turkey since 2012, and the highest-level visit by an Emirati official since relations hit a low over a series of regional tensions.

Erdogan and his petulance for Islamic banking:

Reported extensively by TFI, Turkey used to be a prosperous economy. In fact, it used to be a bright shining spot as a liberal democracy, and a NATO member with a high economic growth rate.

However, Erdoğan’s Islamist policies have destroyed the Turkish economy. Erdoğan opposes any move to hike interest rates even as Turkey faces very high inflation rates and a constantly depreciating currency. It is well-settled amongst economists, that interest rates must be raised to restrict inflation. But Erdoğan believes that higher interest rates further push inflation.

Sources privy to the matter believe that Erdogan is chained by the dogmas of Sharia, where increasing interest rates is seen as a frowned-upon practice.

In Islam, money has no intrinsic value – money, therefore, cannot be sold at a profit and is permitted to be used as per Sharia only. Meaning, there is no concept of charging interest in Islamic banking. Even if there is, the profits are minimized.

The Turkish President keeps cutting interest rates at regular intervals and cracks down on rational economists in his government who advocate increasing interest rates. The inclusion in the FATF (Financial Action Task Force) grey list is further squeezing the life out of its economy and making the lives of ordinary citizens difficult.

Meanwhile, global investors are maintaining a safe distance from Turkey already. Total foreign investments in Turkish stocks and bonds stood at just $30.6 billion at the start of August. FDI too went down to $5.7 billion last year, as against the record $19 billion in 2017.

Why the relations took a tumble?

Ties between Turkey and the UAE have been strained in recent years, particularly over Ankara’s support for Qatar, conflict in Libya, as well as tensions in the Gulf and in the eastern Mediterranean.

Furthermore, the relations between the two nations took a further dive when Ankara tried to rejuvenate the Muslim Brotherhood. Meanwhile, Erdogan, to this date, believes that the 2016 coup was orchestrated on behalf of the UAE and Arabs, with America backing it covertly.

Saudi Arabia and the UAE regard the Muslim Brotherhood (which Turkey supports ostensibly) as dangerous, and have tightened their crackdown on the organization, which once had immense powers of mass mobilization.

The Islamic bloc has its reasons to dread the Muslim brotherhood. When popular protests flared across the region in 2011, the UAE and Saudi managed to cull them, but Egypt served as an example of the threat the Muslim Brotherhood could pose to their mode of absolute rule.

After President Mubarak was overthrown in 2011, a government dominated by the Muslim Brotherhood took shape, which threatened the powerful position of the military. It took a lot of planning and effort to take down the regime.

The fear of resurgent Islamist terror that originates from the Muslim Brotherhood is a global threat that has kept the world wary of it, more so the Arab World.

Also read: It is UAE, Egypt, Saudi Arabia vs Turkey now: How the Libya War has divided the Muslim World into ‘Good Muslims’ and ‘Bad Muslims’

However, in an attempt to pacify the UAE, earlier this year, Turkish officials asked some channels, including ones belonging to the Muslim Brotherhood, to end some of their political programmings.

The continuous war in Libya, Mediterranean, funding Islamic activities in India, supporting Pakistan and China, has put a lot of strain on Turkey’s finances which has massive international debts. The onslaught of COVID-19 pandemic has further worsened its economy.

Thereby, the UAE, having a sovereign wealth fund of more than $800 billion, will be coming into the meeting with the high ground. If Turkey does not completely pin itself into the mat willingly, UAE will simply turn its back and move. And if UAE moves away, there is no way Saudi Arabia is coming for the rescue.

And once the Arab world is angry, the repercussions are bitter. Ask Pakistan, which had to take loans to repay the loans given by Saudi Arabia.