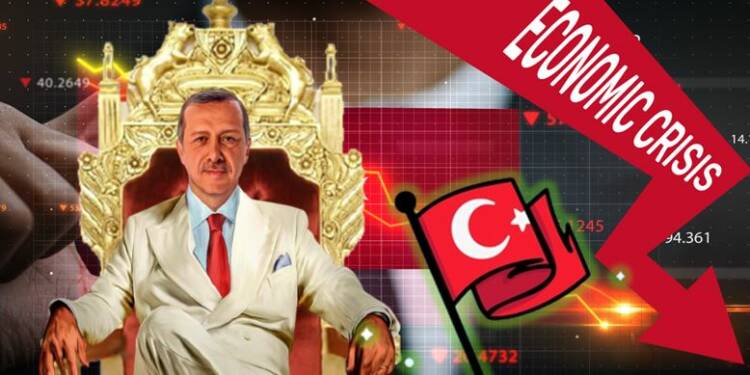 Lira slips to a new low:

Turkey’s currency Lira fell by 5.7% on Thursday, following a decision by the central bank to cut borrowing costs for the fourth straight month. To offset the impact of rising inflation, Turkey has also raised the country’s minimum wage by 50% to $275 per month.

Also read: Turkey’s wannabe Khalifa wants Turks to turn vegetarian and the reason will leave you in splits

President Erdogan is believed to have exerted pressure on the central bank to lower the borrowing costs. Officials supporting Erdogan’s decision say lower interest rates will boost the country’s exports and economy, and help the creation of jobs and employment, but experts remain skeptical amid the roof-breaking inflation.

As data from the past four months suggests, the strategy of lowering the interest rates has not eased Turkey’s economic woes. So, why is Erdogan still adamant about continuing this proven-failed strategy? Is alleviating Turkey’s economic miseries even a part of his agenda? Perhaps not!

Democracy grows weaker when the economy stares a collapse in the eye. Authoritarians tend to tighten their grip over the nation when the country’s democratic institutions are weaker. Over the past five years, and especially after the failed coup attempt of 2016, Erdogan has brazenly attempted to consolidate power in the Presidential office.

His maniac behaviour was driven by his ambitions of materializing his Caliphate ambitions. Turkey’s military became involved in Libya, Syria, and Azerbaijan. He even clashed with big powers including the USA, Russia, the EU and India to proclaim himself as the torch-bearer of the Islamic causes in the world. All in all, Erdogan is a leader who prioritizes his interests even before the interests of his nation.

So, Erdogan has systematically destroyed Turkey’s economy while simultaneously strengthening his grip over the power. By weakening Turkey’s democracy, Erdogan intends to bury the allegations of corruption against his family and top party leaders.

As Turkey descends into chaos and democracy grows even weaker, Erdogan will be witnessing lesser electoral challenges. Erdogan may even use this chaos to consolidate more powers. He recently dubbed social media a threat to Turkey’s national security. Essentially, freedom of expression is getting even more luxurious in Turkey.

Corruption allegations against Erdogan and company:

Erdogan is facing several corruption allegations. His son, Bilal Erdogan, for instance, was accused of getting assistance from several provincial governments, government institutions and officials in October this year. Documents leaked from the Turkish Youth Foundation revealed several members of this foundation, of which Bilal Erdogan is one of the leaders, were recommended to be placed in various state bodies, from the management of educational establishments to positions within the police and armed forces. This prompted opposition leaders to demand clarification from the Erdogan administration.

Last year, a corruption case involving Erdogan and his family had also unfolded in Turkey. Erdogan’s son-in-law Berat Albayrak, who last served as the Finance Minister of Turkey, had come under worldwide criticism for pocketing the money and mastering financial corruption. Berat Albayrak is also facing the charges of sharing dividends with the political elites, especially those in Erdogan’s Party (AKP).

Also read: Will Erdoğan’s son-in-law bring an end to his evil regime and Khalifa dreams?

Turkey’s notorious mafia leader and President Recep Tayyip Erdoğan’s once close aide Sedat Peker is also levelling severe allegations on President Erdogan and his allies. Now, a recent survey has revealed that most Turkish people believe the corruption claims to be true despite repeated attempts by the governing party to accuse Peker of “Working with Turkish enemies.”

Peker has opened Pandora’s box into “deep state secrets,” claiming revenge on government officials who launched a criminal prosecution against him and raided his home. In one of his explosive claims against the ruling Justice and Development Party, Peker alleged about long-time cooperation of Turkish senior officials with Al-Nusra extremists in Syria.

Erdogan knows that political fire ignited by these allegations could severely hamper his political career. So, he has resorted to destroying his country’s economy. He is sacrificing Turkey to save his own interests. Erdogan’s removal from Presidential office is the only thing that can save Turkey’s sinking fortunes now.