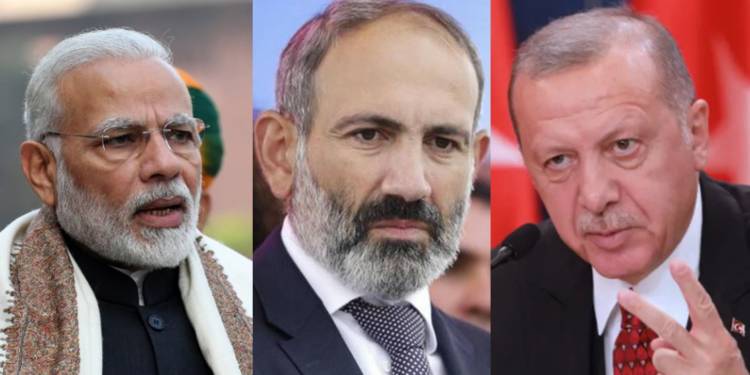 India’s new arch-enemy, Turkey, is now pushing yet another region towards war and devastation. Ankara is now getting involved in the Azerbaijan-Armenia conflict over the South Caucus region of Nagorno-Karabakh. The three decades old-dispute between Armenia and Azerbaijan that has kept Nagorno-Karabakh on the edge has now escalated into major hostilities. And now the battle lines are becoming clear- Turkey and Pakistan support a Muslim Azerbaijan, while Russia supports a Christian-majority Armenia.

The manner in which the Armenia-Azerbaijan conflict is playing out makes it incumbent for India to pick sides. Armenia is an enemy for both Pakistan and Turkey, while Islamabad and Ankara themselves are India’s biggest foes. For India, the enemy of an enemy is a friend. Also, Armenia remains India’s friend that took India’s side even after the abrogation of Article 370 and scrapping of Jammu and Kashmir’s special status last year.

Moreover, Moscow, an Armenian ally, is also one of India’s biggest defence partners. As such New Delhi’s tilt amidst the ongoing conflict should be favourable towards Armenia for both strategic and diplomatic reasons.

The conflict between Armenia and Azerbaijan, which is rooted in the strategic territory of Nagorno-Karabakh, has now escalated into actual hostilities. While Azerbaijan claims this territory, Armenia remains committed to defend Karabakh’s right of self-determination. The latest offensive on Armenia by Azerbaijan, being wrongly passed off in media reports as ‘clashes’ have left 23 dead.

Sixteen separatist Armenian fighters have been reportedly killed, while Armenia remains committed to repelling the Turkey-backed onslaught by Azerbaijan. Armenian Prime Minister Nikol Pashinyan tweeted, “Armenia is guarantor of the security and independence Artsakh (Nagorno-Karabakh). Today Armenia stands with Artsakh with the full potential of its state system and population. We will make every possible effort to ensure borders of our homeland are secure, to protect our freedom and independence.”

#Armenia is guarantor of the security and independence #Artsakh. Today Armenia stands with Artsakh with the full potential of its state system and population. We will make every possible effort to ensure borders of our homeland are secure, to protect our freedom and independence.

#NagornoKarabakh will be defending every single inch of their land, their freedom and security. #Armenia is firm guarantor of their security. Once again #Azerbaijan's aggression will be repelled.

In another tweet, Pashinyan added, “All Armenians must unite to defend our history, our homeland, identity, our future and our present. And we will win and there is only one prerogative, that we promise ourselves that we won’t retreat a single millimeter from defending our people and our Artsakh.”

All #Armenians must unite to defend our history, our homeland, identity, our future and our present. And we will win and there is only one prerogative, that we promise ourselves that we won't retreat a single millimeter from defending our people and our #Artsakh.

The ongoing armed confrontation between Armenia and Azerbaijan is the worst escalation since 2016, when 110 people were killed, raising the possibility of a full-fledged war between the two sides. According to the Karabakh Presidency, matters escalated on Sunday morning when Azerbaijan started “active bombing” along Karabakh’s frontline. Karabakh separatist leader, Arayik Harutyunyan has also accused Turkey of sending mercenaries to Azerbaijan.

Please share the news @esrailian Armenians in #Arstakh have been attacked. We are praying brave men & women risking their lives to protect Artsakh & #Armenia. The news is misleading & these are not “clashes.”

While the media reports continue calling the latest hostilities mere ‘clashes’, the fact remains that Azerbaijan has carried out a full-blown assault against Armenia and Nagorno-Karabakh. The aggression has not spared even civilians along the disputed region and they are being allegedly backed by Turkish mercenaries. As such Armenia has also started looking for international support amidst the interventionist attitude of Turkey which has pushed the sensitive region into a quagmire.

The Armenian PM tweeted, “I call on the international community to use all of its influence to halt any possible interference by Turkey, which will ultimately destabilize the situation in the region. This is fraught with the most devastating consequences for the South Caucasus and neighbouring regions.”

I call on the international community to use all of its influence to halt any possible interference by Turkey, which will ultimately destabilize the situation in the region. This is fraught with the most devastating consequences for the South Caucasus and neighboring regions.

As such the present situation necessitates India to play a bigger role. At least, New Delhi shouldn’t remain aloof from the ongoing crisis. Diplomatically, India ought to support Armenia, for the Armenian PM had supported India while Turkey and Pakistan were trying to internationalise the Kashmir issue.

Today, Armenia is in danger because of Turkey's aggression

It's time that we Indians support Armenia pic.twitter.com/a9p7Yqzdda

And at a strategic level, it is never a good idea to let your enemies foment troubles for your friend. The intervention on the Azerbaijan-Armenia border is a part of Turkish President Erdogan’s larger Islamist agenda. Of course, Turkey-Armenia tensions are also dictated by the historical memory of the Armenian genocide by the Ottoman Turks. Erdogan has chosen Azerbaijan given the Islamic revivalism in the country that suits Ankara’s narrative. Also, Azerbaijan has Pakistan’s backing on the military front.

But it isn’t lost on India either that both Turkey and Pakistan are the biggest hubs of anti-India activities in the entire world. India and Armenia share far too much in common, notwithstanding the geographical distance that separates them. Moreover, Armenia being an Orthodox Christian country looks upon Russia as its protector.

In fact, Armenia looks up to India for support and India can do a number of things to help it- from issuing statements condemning Turkish aggression to issuing a Line of Credit for defence purchases, and probably sending supplies to help the Armenian troops. Recently, India clinched a deal to supply four indigenously built weapon-locating SWATHI radars to Armenia. While the country needs defence supplies for some very obvious reasons, India aspires to become a leading defence exporter and again the interests between India and Armenia seem to converge.

Armenia is a true ally for India, and now since it is at the brink of a major war with Turkey-backed Azerbaijan, New Delhi must back it up and call on the international community to do the same.

Snakes with beards: Fact or folklore?