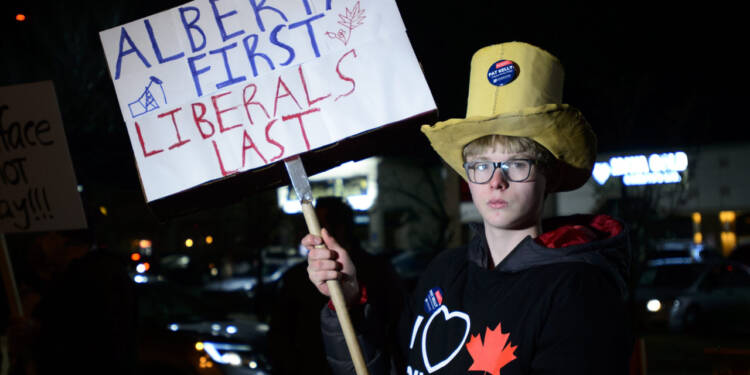 The province of Alberta wanted to free itself from the heavy-handed liberal idealism and the new sworn-in Premier came as a sigh of relief. The lady who claimed to be an outsider stood with the demonstrators who were upset about the COVID-19 restrictions and vaccination mandates and made a commitment to put Alberta first while fighting Ottawa with her act of sovereignty.

Alberta Premier Danielle Smith always campaigned on an “Alberta First” slogan and is now in a bid to free the province from Trudeau’s clutches.

Before running in the race to become the next premier of the province, Danielle assured the province she would also welcome an Alberta Sovereignty Act, or “contentious law’. And now she is all set to detach all the strings to federal policies.

Smith has instructed her cabinet to take a tough stance in talks with Ottawa and to reject any agreement that imposes onerous conditions on receiving federal funds. She has also threatened the province with abandoning such agreements.

The newly-elected Premier, whose successful campaign for United Conservative Party’s leadership was centred on contempt for the federal government, urged ministers in an email to her leadership team on Thursday to defend Alberta’s interests when it comes to federal funds and policies.

She cited federal plans for universal dental coverage as an example of a federal programme from which the province can choose to withdraw. Ms. Smith also raised long-standing issues with federal health transfers, saying Alberta would not only press for increases but also insist that the money be given out unconditionally on a per-capita basis.

When the provincial legislature reconvenes at the end of November, the premier intends to introduce her yet-undrafted sovereignty legislation. The bill, according to Danielle Smith, would grant the province the authority to flout federal laws and court rulings and would be essential to fighting back against those kinds of policies.

Danielle Smith’s proposed sovereignty-law saw controversies and even became a bone of contention between Smith and the province’s Lieutenant Governor by hook or crook. The Sovereignty Act affirms Alberta’s right to refuse and reject federal government actions or laws that intrude into provincial areas of jurisdiction or attack the interests of Alberta.

Danielle Smith was in a bid to propose the Alberta sovereignty act with a view to handing the Albertans back their constitutional rights that the lawless federal government continues to invade for a long. Its sole purpose is to bring lawfulness to an often lawless and misguided federal government.

An act limiting Trudeau’s control over the province. Now, how will Mr Trudeau intrude into the province’s politics or will it have jurisdiction? Although the act received flak from Trudeau’s lackeys, now with Smith in power, Alberta will see a change. A change that Albertans have wanted to see for a long time.

According to Ms Smith’s memo, the UCP government must act as a unit to demand that Alberta be considered as an equal level of government with protected constitutional authority over particular activities, including health care and resource development.

Ministers are supposed to regularly notify the Ministry of Intergovernmental Relations, of which Ms Smith is the minister, on any meetings, financing agreements, and consultations with the federal government. Insofar as it’s feasible, she claimed, Alberta is looking for unconditional federal support.

“Alberta is consistently treated as a subordinate level of government, with unilateral federal decisions that landlock our resources, undermine our prosperity and make life less affordable for Albertans,” said Ms. Smith, who drew attention to the federal oil and gas emissions cap, fertiliser emissions target and firearms buyback program.

Smith cited the national dental care programme, which the Liberal government introduced earlier this year, as an instance of an area in which Alberta was not actively involved. In the message, she stated that Alberta “would simply not engage in their discussions” if Ottawa does not “honour co-operative federalism” through thorough consultations on new initiatives.

Alberta, a province which is self-sufficient freeing itself from Ottawa’s clutches will surely become a  pain in the neck of the Feds. The Canadian economy is in an absolute dilemma but when it comes to the province of Alberta, it continues to outperform the rest of the country. This is something that has always irked Trudeau due to his own poor report card. Now at a time when the Canadian economy is in the doldrums, the country needs Alberta owing to its vast energy reserves and abundant resources but the liberals are continuing to ignore the fact.

Recently, a major report suggested that Alberta’s economy is solely responsible for preventing a total collapse of the Canadian economy. According to TD Bank, Alberta is currently on track to grow the real GDP of Canada.

Furthermore, Job growth in Alberta has been solid so far this year, bolstered by gains in the private sector.

So imagine the loss that the Canadian economy is about to witness once Alberta detaches its strings from Ottawa. History has shown that Justin and liberals hate Alberta. Trudeau’s nonsensical agenda has always been in the crosshairs of Alberta’s authorities. But, now with a potent premier in power the wait for “freeing Alberta” is over.