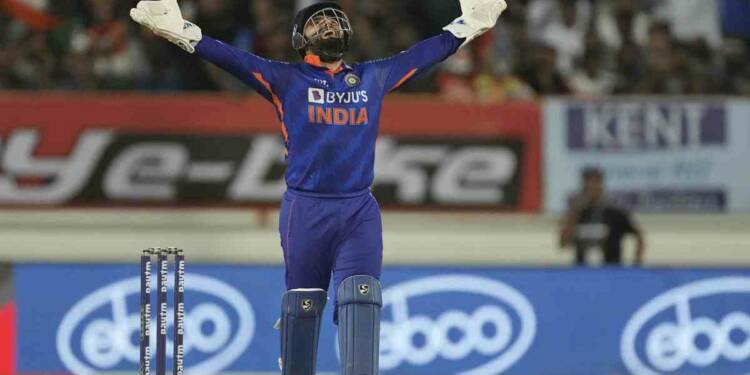 Rishabh Rajendra Pant is an Indian international cricketer. As a wicket-keeper and batter he plays for the Indian cricket team. He is a left-handed player. He played for all formats for India. In this article we are going to talk about the biography, career, notable works, games and family of Rishabh Pant so read the article till the end.

Rishabh Pant is an international cricketer and he played so many games for country, state and clubs this biography article is incomplete without talking about his career. So here you will gain info about his achievements and life story.

On 22 October 2015 Rishabh Pant made his first-class debut in the 2015–16 Ranji Trophy and in the next month he makes his List A debut in the 2015–16 Vijay Hazare Trophy. On 18 August 2018 he made his test debut which is played against England. In the year 2016 Pant was purchased by the Delhi Daredevils in Indian Premier League.

In the year 2018 during the Indian Premier League, against the Sunrisers Hyderabad, Pant scored an unbeatable 128 from 63 balls and making it the then highest individual score by an Indian cricketer in the history of IPL. In the IPL he also became the second youngest player to score a century. Pant was named as the captain of the Delhi Capitals for the 2021 Indian Premier League In March 2021.

Pant was named as the vice-captain of the Indian team In May 2022 for the South Africa tour of India 2022 series.

Rishabh Pant was born on 4 October 1997 at Roorkee, Uttarakhand, India. He is popularly known for his consistency score of runs in Test cricket. In domestic cricket Pant plays for Delhi and captain of Delhi Capitals in the Indian Premier League. Also, he was the vice-captain of the U-19 India team in the year 2016 Under-19 Cricket World Cup.

Rishabh Pant was born to Rajendra Pant and Saroj Pant at Roorkee Uttarakhan. At the age of 12, with his mother Pant would travel to Delhi during the weekends from train along with Tarak Sinha to visit the Sonnet Cricket Academy. And after that his cricket career starts. In April 2017 Rishabh’s father died, due to a cardiac arrest.

As one of the reports it is said that Rishabh makes his annual earning of more than 20 crores INR.

Net worth and brand valuation of Rishabh Pant’s have increased, and the values are projected to have increased by 40% in the last few years.

From IPL Rishabh Pant earns approximately 16,00,00,000 rupees. In India he is among the most liked players and also generate the good amount of revenue by doing brand promotions also.

He is the owner of a house in Roorkee Uttarakhand, which cost approximately 2 crores.

What is the highest score of Rishabh Pant in IPL?

We hope this biography article of Rishabh Pant will be helpful for you to understand his journey and works.

Trudeau launches a brutal crackdown on Conservative businesses in Canada