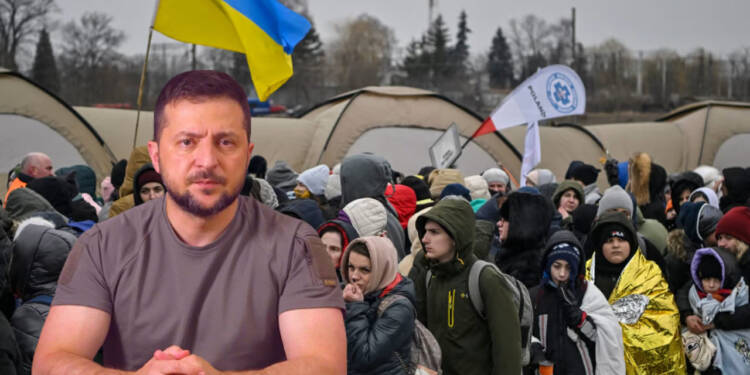 The early excitement to house Ukrainian refugees across countries has come to an end. They now find themselves in hot waters as they have failed to find employment and are incessantly being shown the door where they were housed. All they want now is to return home. But Zelensky doesn’t want them back home. He fears that they may become the source of civil uprising against his dictatorial regime.

Until October 25th, the United Nations reported that there were 7.7 million Ukrainian refugees in Europe, including 2.85 million in Russia. Apart from the refugees that flee towards Russia, Ukrainian refugees are facing a nightmare now. The promises of housing and employment made to them have fallen through. The 27 member states of the European Union had accepted these refugees to a degree they had previously deemed inconceivable during the 2015–2016 Syrian refugee crisis.

However, this temporary protection has proven to be futile. Many refugees have been forced to relocate frequently and face hardships instead. Women and children make up the majority of the refugee population and mothers of young children report finding it particularly difficult to find time to apply for jobs or sign up for language classes.

Zelensky’s government is recommending refugees to delay their return until the next spring. Ukraine’s deputy prime minister Iryna Vereshchuk warned, “The networks will not cope. You see what Russia is doing. We need to survive the winter.” Basically, Ukraine considers the people who fled the country to save their lives as a burden. The warning came following a poll which said that more and more Ukrainian refugees wanted to return home.

Despite asking Ukrainians to return in the spring, Vereshchuk then urged them to stop returning for the time being. She said, “the situation will only get worse. If it is possible, stay abroad for the time being”.

Zelensky who had portrayed himself in a “larger than life” image has been exposed in the past few months. Starting from the ‘Vogue photoshoot’ to the increasing corruption charges against the government, Zelensky’s image has found itself in a can of worms.

Further, the refugees who would be returning back home would demand peace as they are tired of the long war. However, the Ukrainian President has refused to negotiate and establish peace. Many children who left home have lost their partners and are fuming in anger against the Zelensky government which sent them to the borders to fight without proper equipment. The image of Russia being the enemy has been throttled as it is the only one who has taken the most refugees to date. Almost That is almost 37% of them. Did the Western media tell you about these figures?

Realising that a tragedy may fall upon the government, Zelensky has understood that Ukrainians back home will be the end of his regime which has been sustained with only the support of the US and its allies. He is drunk on the euphoria of power and therefore challenges anything that goes against it.