Serbs rise up in arms against NATO 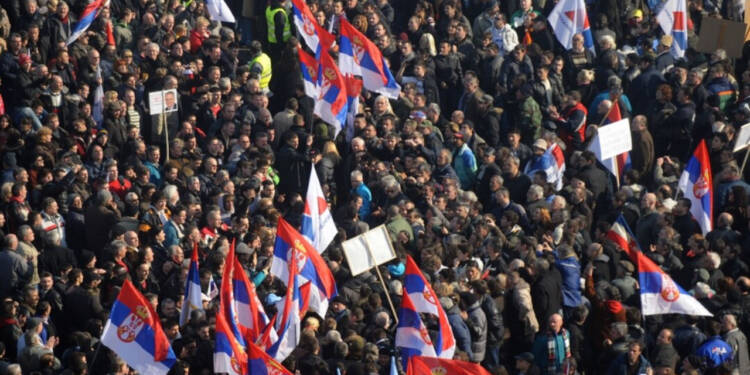 The world is a hotbed of activity and the Ukraine war is not the only saga that is taking place around Europe. The Balkans have also become a hot potato for Europe as major events have started to unfold here as well.

On one side, Serbia and Kosovo are armed to teeth to launch a full-scale assault against each other, whereas, on the other hand, Serbs have started to call for secession from Bosnia and Herzegovina.

Make no mistake both of the events are connected to each other. At least, NATO’s latest warning to Serbia, which was actually aimed at the Serbs proves so.

There should be no doubt, the Balkans have suddenly become a very happening place. Recently, Germany organized a Western Balkans summit in the German capital Berlin intended to bolster relations with the six countries of the region.

But, ahead of the meeting, NATO member Germany served a warning to Serbia, or shall we say Serbs to choose its stance and stop their rising disagreement.

According to a media report by Euractiv, Germany cautioned Serbia against cultivating deeper ties with Russia, warning that it could thwart its bid to join the European Union.

The German officials have stressed that it’s time for Serbian President Aleksandar Vučić to get off the fence. The officials stressed, “If he takes the path to Europe, he will have support, from the EU as a whole and from the German government. If he chooses the other path, he will be ensuing consequences.”

The meeting went well, and the leaders left without any hassle. But the very following day, the friction between Serbs and Kosovo Albanians grew more intense in the Balkans.

Kosovo and Serbia conflict and Serbs up in arms

On 2nd November, Serbia announced that Belgrade had a military escalation with Pristina. According to the Belgrade authorities, unidentified drones reportedly appeared on the Kosovo-Serbia border and began “observing the barracks and the locations” of the Serbian army, which led Serbian President Aleksandar Vucic to order his country’s fighter jets to intercept them.

In retaliation, Kosovo reopened the battle over license plates, forcing drivers of vehicles with Serbian number plates to get them changed to Kosovo ones. The situation between the two nations was back to square one.

Furthermore, the Serbs in Bosnia and Herzegovina are now looking to join Serbia since the hope for NATO membership has faded over the years.

The Bosnia peacekeeping mission was also extended by the UN amidst rising political unrest.

The ethnic Serbs of the nation have elected Milorad Dodik, as their new President who has strong ties to Russia and desires secession from Bosnia and Herzegovina. If this occurs, Republika Sprska, which the Serbs of the Balkans have long desired, will begin to take shape.

The Balkans’ current trends all point to one thing: Serbs have made it clarion, and they wish to leave the west’s sway, which has long paralyzed their ability to make decisions.

The states of the Balkans were lured to NATO membership for exactly the same reason as EU membership. For instance, negotiations to bring Bosnia and Herzegovina into NATO started in 2008. Yet, there have been no developments in that regard.

Additionally, malicious attempts to incite Serbs have never been lacking in Kosovo and other states, which are supported by NATO. So, one could easily suggest why Serbs are growing disenchanted with NATO and the West and letting all hell let loose.

DRC, Zambia and more; How the West controls election results in Africa