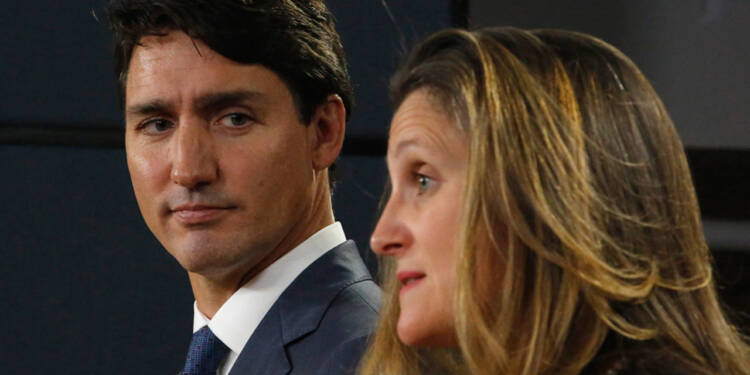 We all know how Justin Trudeau is running an extremely expensive government, that is only driving inflation up and the Canadian economy down. So, Chrystia Freeland, last week vowed to rein in governmental expenses and double down on cost-cutting measures.

But guess what, she has now been snubbed by none other than her own boss, Canada’s prime minister Justin Trudeau.

Canada will no longer focus on implementing cost-cutting measures. For all those who are well-versed in the dire condition of the Canadian economy, this isn’t less than a rude shock. Trudeau is running a deficit government and is spending like never before on programs aimed at providing Covid relief measures. However, a National Post report confirms that “almost half — $205 billion of the $500 billion in new spending measures — had nothing to do with COVID.

Last week, Canada’s deputy Prime Minister Chrystia Freeland declared that her focus on the spring budget would be to implement cost-cutting measures. Her message was simple. To finance new projects, the new funding will not be issued. Instead, the needed money will have to be drawn from existing program cuts.

Now, this pledge of Freeland could rock Trudeau’s boat since he is planning to lavish hefty money on provinces under healthcare obligations, an issue Trudeau has been conveniently sweeping under the rug for over 2 years now. But now it seems that Trudeau has imposed his radical economic agenda over Freeland’s efforts to improve the Liberal Party’s economic credentials.

On Thursday, Freeland delivered the fall economic statement which came across as a striking betrayal of her earlier promises. No cost-cutting measure was announced at all! In fact, the government doubled down on the exact opposite. The Liberals are proposing large, costly new government programs. And to take care of the rising budget deficits, stringent controls on private investors and industries are being introduced. Simply put, the government’s focus is on ramping up the government’s income by extorting more cash from businesses.

Some political pundits believe it’s being done to appease the New Democrats. Had Freeland introduced austerity measures to bring the economy back on track, the NDP would have called it a breach of the non-aggression pact that currently governs the relationship between the NDP and minority Liberals. Anyway, Jagmeet Singh-led NDP has previously called on the federal government to address the “problem of corporate greed.” So, anything that goes against businesses and a healthy economic environment in Canada is a big win for NDP.

A bloodbath expected in Canadian economy

Nevertheless, Freeland is now predicting a budget deficit of $36.4 billion, down from $52.8 billion. But this estimate is derived from a questionable economic growth projection. In worse than expected scenario, the deficit will clock in at $49.1 billion. Since Budget 2022 was released half a year ago, the Liberals have already announced an additional $13.4 billion in spending for this fiscal year alone — which itself makes a mockery of any long-term budgetary projections.

By undermining his own deputy Prime Minister, Trudeau has given a loud and clear message to his fellow liberals – ‘My government, My rules.’ His sole focus is on keeping his government afloat by keeping New Democrats in stitches. It hardly matters if it is achieved at the expense of the stability of the Canadian economy.

For example, to increase the government’s revenue, Freeland plans to institute a tax on corporate share buybacks. Make no mistake, such plans have spectacularly backfired in the US as well. So, what exactly Trudeau plans is a bloodbath of businesses in Canada. Canadian businesses and the overall economy is being hounded just to keep Liberals in power.